Freud and his followers tried to understand psychological life in terms of biology. Their ideal was scientific objectivity.

Freud and his followers tried to understand psychological life in terms of biology. Their ideal was scientific objectivity. They be-lieved the analyst’s human tendency to identify with the subjects of study impeded objectivity. In contrast, Kohut viewed empathic comprehension as the fundamental mode of psychoanalytic in-vestigation. It is the knowledge of the other’s experience, what it is like to be in that person’s shoes. Empathy is the understand-ing of another’s complex psychological experience as whole. Using this empathic method, Kohut attempted to create an “experience-near” psychology, explaining psychological events in terms of meanings and motives comprehensible from ordinary experience. He contrasted this to Freudian metapsychology with its postulated experience-distant forces, energies and structures.

The concept of bipolar self (Figure 18.3) refers to Kohut’s metaphorical description of the self as having two poles, one of ideals and ambitions, the other a sense of the grandiose self. The former involves the sense of being vigorous and coherent because one is associated with what is good and powerful, for example, that an adult might have when working in accord with professional ideals. The grandiose pole of the self consists in the sense of being personally valuable and appreciated, as a child may feel by virtue of the glowing enthusiasm of parents.

Kohut’s singular contribution was the idea of the self-object. Clinical observations led him to believe, like of ob-ject relations theorists, that the self could survive and prosper only in the context of experience with others. These experiences Kohut called self-objects, that is, objects (in the psychoanalytic sense of intrapsychic representation of other people) that are necessary for the well-being of the self. Kohut was speaking of intrapsychic experiences, not interpersonal relations. Intrapsy-chic experience may be contingent on interpersonal events. For example, the sense that one is appreciatively responded to usu-ally requires some sort of active response from another person, but how that person’s actions are experienced depends on many factors besides the actions themselves.

·   In merger, the self is maintained through the sense that the person and self-object form a unity that is powerful and alive in a way the person could not be by himself or herself. The sense of merger can be found in the feeling that “we” do some-thing. Outside the analytical situation, it is commonly seen in athletic, professional, and military activities.

·   Alter ego (or twinship) self-object induces a sense of personal coherence by virtue of having a partner who is like oneself.

·  The mirroring self-object proper supports the sense of per-sonal value and coherence through its accurate, valuing ap-preciation of the person. The person who feels valuable and whole when a parent’s or friend’s eyes light up as she or he comes into a room or who feels similarly in response to au-thentic praise of accomplishment is experiencing such a mir-roring self-object.

Self-objects remain essential throughout life. Contrary to psychoanalytic theories that characterize maturity in terms of au-tonomy, self-psychology views mature people as ordinarily depend-ent on others for appreciation, comradeship, meaning and solace. The nature of the people and institutions that embody self-objects changes with maturation. They become more numerous and more complex, often serving many psychological functions beyond their self-object function. It refers to the total experience of people and institutions that sustain and support the development of the self.

Disorders of the Self

The study of self-psychology began with the realization that many symptoms of psychological distress could be understood as arising from disorders of the self. These include symptoms in-volving direct experiences of an endangered, enfeebled, or frag-mented self, and symptoms arising from unsatisfactory attempts to protect an endangered self. In practice, these symptoms may appear in the same patient, but for expository purposes, separat-ing them is useful. Sometimes the symptoms of self-pathology are acute (Figure 18.4), but more often they are chronic states whose intensity varies as the self is felt to be more or less in danger. 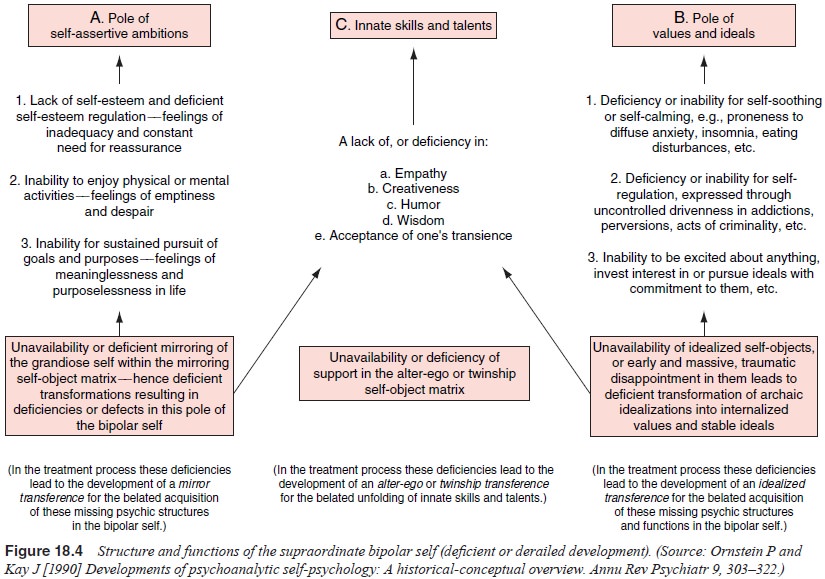 Symptoms that directly express the enfeeblement or frag-mentation of the self include certain depressive states, traumatic states, hypochondriasis, some forms of rage, called narcissistic rage, and direct experiences of profound disorganization.

A common response to feeling the self-endangered is rage (Kohut, 1972). Narcissistic rage is a major public health prob-lem. The most common cause of violence and homicide is the rage engendered when people feel “disrespected”. Spousal mur-ders most commonly result when an already demoralized person is confronted by apparently trivial inconsiderate behavior and responds with murderous rage. Communal chronic narcissistic rage may be a major factor in world history when maintaining group dignity or seeking compensation for past inequities may lead to hatred and destructiveness lasting for centuries. Narcis-sistic rage varies from the momentary fury to lifelong states. Like many activities in the service of the self, narcissistic rage is often rationalized. Perpetrators often describe violence as necessary to achieve a goal but closer examination usually shows that vio-lence does little to effect its supposed aim. Physical child abuse, often a manifestation of narcissistic rage resulting from a sense of inadequacy in caring for children, is commonly rationalized as “educating” the youngster. Narcissistic rage often joins other psychological action designed to invigorate the self.

States involving the direct experience of fragmentation, in which patients cannot organize experience or recognize their coherent wishes, are overwhelmingly distressing. Any solution to this state, including the psychotic reorganization of experience, feels better. Indeed, such states are most commonly seen briefly with the onset of overt psychosis. Patients commonly describe this state as “going crazy” and may attempt desperately to hang on to some organizing principle. These states are psychiatric emergencies because many patients report that death is prefer-able to the continuation of the intense anxiety they experience. Many other symptoms are understandable as attempts to repair an impaired or endangered self. These include relations with oth-ers designed to achieve urgently needed self-object experiences and activities designed to soothe or stimulate the self.

When self-object functions become unavailable to such an extent that the person cannot provide for himself or herself these functions based upon personal abilities and memories al-ready available, a psychological emergency ensues. In this cir-cumstance, the person uses less broadly adaptive means to try to compensate for the missing but needed psychological functions. Pathological functioning is manifested either in direct expression of a distressed self or as problematic compensatory activities.

Intersubjectivity in psychoanalysis refers to the dynamic in-terplay between the analyst’s and the patient’s subjective expe-riences in the clinical situation. To some extent, all schools of psychoanalysis agree on the significance of intersubjectivity in psychoanalytic work. Intersubjectivity embodies the notion that the very formation of the therapeutic process is derived from an inextricably intertwined mixture of the clinical participants’ subjective reactions to one another. Knowledge of the patient’s psychology is considered contextual and idiosyncratic to the par-ticular clinical interaction. This interaction nexus is considered the primary force of the psychoanalytic treatment process.

The intersubjective position is that mental phenomena cannot be sufficiently understood if approached as an entity that exists within the patient’s mind, conceptually isolated from the social matrix from which it emerges. Intersubjectiv-ists see the analyst and the patient together constructing the clinical data from the interaction of both members’ particular psychic qualities and subjective realities. The analyst’s per-ceptions of the patient’s psychology are always shaped by the analyst’s subjectivity. Conversely, the patient’s psychology is not conceptualized as something discoverable by the external, unbiased observer (Hoffman, 1991; Ogden 1992a, 1992b, 1994; Spezzano, 1993