Translation is a process by which the base sequence of DNA transcribed to the mRNA is interpreted into amino acid sequence of a polypeptide chain.

Translation is a process by which the base sequence of DNA transcribed to the mRNA is interpreted into amino acid sequence of a polypeptide chain.

The same enzyme that activates the amino acid catalyses its transfer to a molecule of transfer RNA at the 3' hydroxyl of the ribose, an ester with a high potential for group transfer. In this reaction AMP and the enzyme amino acyl synthetase are released.

Protein synthesis is initiated by the selection and transfer of the first amino acid into ribosomes. This process requires ribosome subunits, amino acyl tRNA complex, mRNA and initiation factors (IF). Initiation of polypeptide chain involves the following steps.

1.           The 30s ribosomal subunit attaches to the 5' end of the mRNA to form an mRNA 30s complex. This process requires the initiation factor IF-3 and Mg2+ ions. The attachment is made at the first codon of the mRNA.

2.           The first codon of mRNA will be always AUG. This codon specifies the amino acid methionine. So the first amino acid in the synthesis of any polypeptide chain is methionine.

3.           The tRNA having the anticodon UAC (complementary to AUG) transports methionine to the 30s ribosome and attaches itself to the initiation codon on mRNA. The tRNA, mRNA and 30s ribosome subunit form a complex called 30s - pre initiation complex. This process requires initiation factors and GTP. 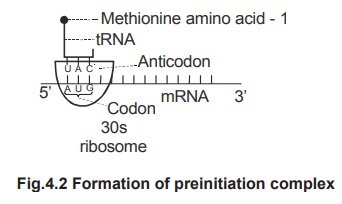 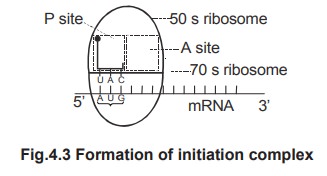 Elongation refers to sequential addition of amino acids to methionine, as per the sequence of codon in the mRNA. It involves the following steps:

1.           The second codon in the mRNA is recognised and as per the recognition, the amino acyl tRNA containing the corresponding anticodon moves to the 70s ribosome and fits into the A-site. Here the anticodon of tRNA base pairs with the second codon of mRNA.

2.           A peptide bond is formed between the carboxyl group (-COOH) of first amino acid of site P and the amino group (-NH2) of second amino acid of A-site. The peptide bond links two amino acids to form a dipeptide. The bonding is catalysed by the enzyme peptidyl transferase which is present in 50s ribosomal subunit.

3.           After the formation of peptide bond, the methionine and tRNA are separated by an enzyme called tRNA deacylase.

4.           The dissociated tRNA is then released from P-site into the cytoplasm for further amino acylation.

5.           Now the ribosome moves on the mRNA in the 5'®3' direction so that the first codon goes out of ribosome, the second codon comes to lie in the P-site from A-site and the third codon comes to lie in the A-site. Simultaneously, the second tRNA is shifted from A-site to P-site. All these events, the movement of ribosome, the release of first tRNA from P-site and shifting of second tRNA from A-site to P-site constitute translocation. Translocation is catalyzed by the enzyme translocase.

6.           The third codon is recognised and the amino acyl tRNA containing the corresponding anticodon moves to the 70s ribosome and fits into the A-site. The anticodon base pairs with the codon. A peptide bond is formed between the third amino acid of site-A and the second amino acid of the dipeptide present in the P-site. Thus a tripeptide is formed. 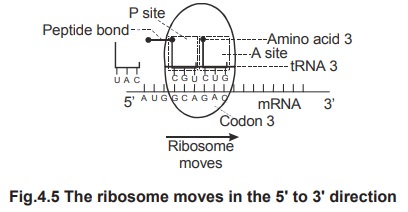 8.           The elongation of polypeptide chain is brought about by a number of protein factors called elongation factors.

The 3' end contains stop codons or termination codons. They are UAG or UAA or UGA. Termination is helped by the terminating protein factors. The terminated polypeptide chain is released from the ribosome.

After the release of polypeptide chain, the 70s unit dissociates into 50s and 30s sub-units. These subunits are again used in the formation of another initiation complex. 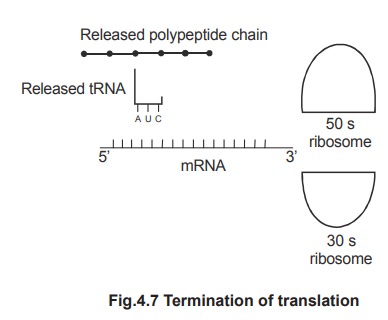 The polypeptide chain released after translation is inactive. It is processed to make it active. In the processing the initiating amino acid methionine is removed.

Along with methionine a few more amino acids are removed from the N-terminal of the polypeptide. The processing is carried out by deformylase and amino peptidase. This processing is called as post translational modifications.