The ingested proteins are metabolised to amino acids by peptide bond cleaving enzymes known as proteinases.

The ingested proteins are metabolised to amino acids by peptide bond cleaving enzymes known as proteinases.

The general reactions of amino acids include deamination, transamination and decarboxylation. The reactions of deamination and transamination bring about the formation of keto acids which can undergo a further series of changes. Inter-conversion between keto acids and amino acids results in the synthesis of many nutritionally non essential amino acids. These provide for the synthesis of protein and important non-protein nitrogenous materials. During protein synthesis the amino acids are absorbed from the blood, as the liver does not store them.

Although each amino acid follows its own specific metabolic pathway, a few general reactions are found to be common in the catabolism of nearly all the amino acids. Most of the amino acids are converted to a-keto acids by the removal of nitrogen in the form of ammonia which is quickly transformed into urea or it gets incorporated into some other amino acids.

Deamination means removal of the amino groups from amino acids. This is the mechanism where in the amino acids lose two hydrogen atoms (dehydrogenation) to form keto acids and ammonia.

The first step is oxidation (dehydrogenation) of amino acid resulting in the formation of imino acid. The imino acid then undergoes the second step, namely hydrolysis which results in a keto acid and ammonia.

The first reaction is catalyzed by amino acid oxidase (also called dehydrogenase) and the coenzyme FAD or FMN takes up the hydrogen. There are two types of amino acid oxidases depending upon the substrate on which they act, namely,

FMN occurs only in the liver and kidney and FAD occurs in all animal tissues. The major site of oxidative deamination is liver but kidney and other tissues also have a role.

NADH gets oxidized to NAD+ as it passes through the electron transport chain.

As the above reaction is reversible it occurs during both amino acid catabolism and biosynthesis.

Transamination is catalyzed by transaminases or aminotransferases with pyridoxal phosphate functioning as coenzyme. There are two active transaminases in tissues, catalyzing interconversions. They are 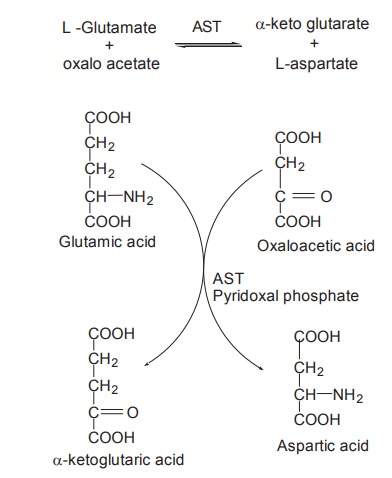 It catalyses the transfer of NH2 group from glutamate to pyruvate, resulting in the formation of a-ketoglutaric acid and alanine. 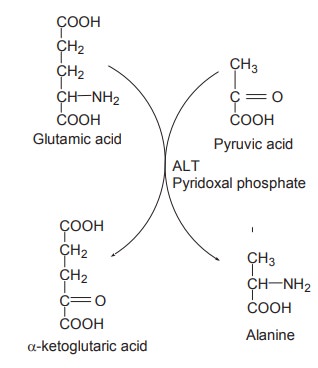 This refers to the removal of CO2 from the carboxyl group of amino acids. The removal of CO2 needs the catalytic action of enzymes decarboxylases and the pyridoxal phosphate coenzyme. The enzymes act on amino acids resulting in the formation of the corresponding amines with the liberation of CO2.

There are several amino acid decarboxylases found in various tissues such as liver, kidney, intestine, spleen, lung and brain. They convert the amino acids into the respective amines and liberate CO2. For example, histidine is converted to histamine by the action of histidine decarboxylase. 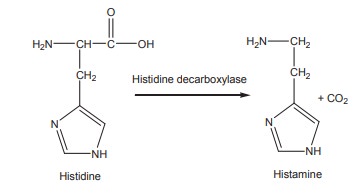 The amino acid tryptophan is converted to tryptamine, tyrosine to tyramine, etc. Such amines are called biogenic amines which are physiologically important.

The transfer of methyl group from one compound to another is called transmethylation and the enzymes involved in the transfer are known as transmethylases.

Transfer of methyl group usually involves methionine (amino acid containing methyl group). By this process various important, physiologically active compounds such as epinephrine, creatine, thymine and choline are synthesised in the body. Detoxification of certain toxic substances are also carried out by this process (eg. nicotinic acid is detoxified by methionine into a nontoxic methyl derivative namely N-methyl nicotinamide).

Methionine is a principal methyl donor. It has to be activated by ATP which requires a methionine activation enzyme of liver,known as methionine adenosyl transferase. By the action of this enzyme, methionine is converted to active methionine.

The active methionine thus formed is known as S-adenosyl methionine and in the activation reaction, ATP transfers its adenosine moiety to methionine and loses three molecules of phosphate, one as orthophosphate(Pi) and two as pyrophosphate (PPi).

Active methionine contains S-methyl bond which is a high energy bond and hence methyl group is liable and can be easily transferred to a methyl group acceptor.

Catabolism of the carbon skeleton of amino acids

The carbon skeletons left behind after deamination are identified as a-keto acids. They may take any one of the following pathways.

They may get reductively aminated by reversal of transdeamination or undergo transamination to form once again the original amino acids.

The keto acids of some amino acids may get converted to the intermediates of carbohydrate metabolism such as a-keto glutarate, oxaloacetate, pyruvate, fumarate and succinyl CoA and hence could be converted to glucose and glycogen and these amino acids are said to by glucogenic amino acids.

The pathways of three important glucogenic amino acids are shown below. Though the routes vary with each amino acid, they all converge at the stage of pyruvic acid. 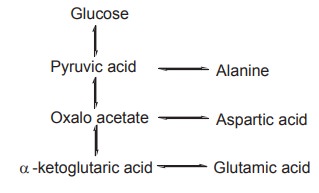 Ketogenic amino acids constitute only a minority and follow specialised and complex pathways. Examples are leucine, isoleucine, phenyl alanine and tyrosine. Among these, leucine is purely ketogenic, whereas the other three amino acids are both ketogenic and glucogenic.