In this section, we consider code for three structures or components that are commonly used in embedded software: the state machine, the circular buffer, and the queue. State machines are well suited to reactive systems such as user interfaces; circular buffers and queues are useful in digital signal processing.

When inputs appear intermittently rather than as periodic samples, it is often convenient to think of the system as reacting to those inputs.

The reaction of most systems can be characterized in terms of the input received and the current state of the system. This leads naturally to a finite-state machine style of describing the reactive system’s behavior.

Moreover, if the behavior is specified in that way, it is natural to write the program implementing that behavior in a state machine style.

The state machine style of programming is also an efficient implementation of such computations. Finite-state machines are usually first encountered in the context of hardware design.

The data stream style makes sense for data that comes in regularly and must be processed on the fly. For each sample, the filter must emit one output that depends on the values of the last n inputs. In a typical workstation application, we would process the samples over a given interval by reading them all in from a file and then computing the results all at once in a batch process. In an embedded system we must not only emit outputs in real time, but we must also do so using a minimum amount of memory. 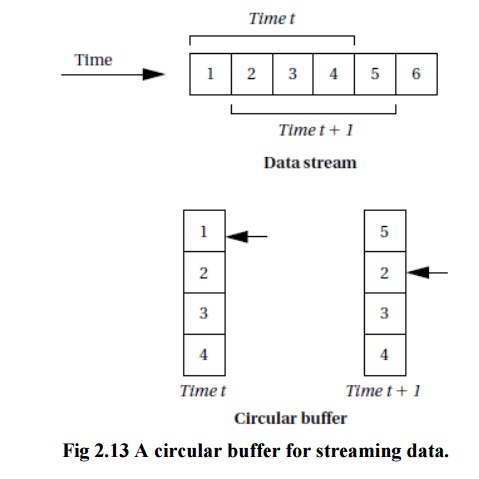 The circular buffer is a data structure that lets us handle streaming data in an efficient way. Figure 2.13 illustrates how a circular buffer stores a subset of the data stream. At each point in time, the algorithm needs a subset of the data stream that forms a window into the stream. The window slides with time as we throw out old values no longer needed and add new values. Since the size of the window does not change, we can use a fixed-size buffer to hold the current data.

To avoid constantly copying data within the buffer, we will move the head of the buffer in time. The buffer points to the location at which the next sample will be placed; every time we add a sample, we automatically overwrite the oldest sample, which is the one that needs to be thrown out. When the pointer gets to the end of the buffer, it wraps around to the top.