A typical embedded computing system has a relatively small amount of everything, including CPU horsepower, memory, I/O devices, and so forth. As a result, it is common to do at least part of the software development on a PC or workstation known as a host as illustrated in Figure 2.12. The hardware on which the code will finally run is known as the target. The host and target are frequently connected by a USB link, but a higher-speed link such as Ethernet can also be used. 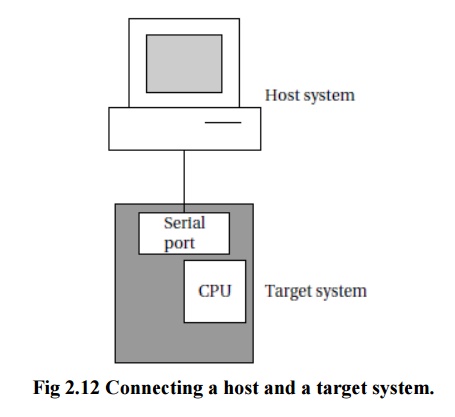 The target must include a small amount of software to talk to the host system. That software will take up some memory, interrupt vectors, and so on, but it should generally leave the smallest possible footprint in the target to avoid interfering with the application software.

The host should be able to do the following:

load programs into the target,

start and stop program execution on the target, and

A good deal of software debugging can be done by compiling and executing the code on a PC or workstation. But at some point it inevitably becomes necessary to run code on the embedded hardware platform.

The serial port found on most evaluation boards is one of the most important debugging tools. In fact, it is often a good idea to design a serial port into an embedded system even if it will not be used in the final product; the serial port can be used not only for development debugging but also for diagnosing problems in the field.

Another very important debugging tool is the breakpoint. The simplest form of a breakpoint is for the user to specify an address at which the program’s execution is to break. When the PC reaches that address, control is returned to the monitor program. From the monitor program, the user can examine and/or modify CPU registers, after which execution can be continued. Implementing breakpoints does not require using exceptions or external devices.

Logical errors in software can be hard to track down, but errors in real-time code can create problems that are even harder to diagnose. Real-time programs are required to finish their work within a certain amount of time; if they run too long, they can create very unexpected behavior.

The exact results of missing real-time deadlines depend on the detailed characteristics of the I/O devices and the nature of the timing violation. This makes debugging real-time problems especially difficult.

Unfortunately, the best advice is that if a system exhibits truly unusual behavior, missed deadlines should be suspected. In-circuit emulators, logic analyzers, and even LEDs can be useful tools in checking the execution time of real-time code to determine whether it in fact meets its deadline.