Some of these devices are often found as on-chip devices in micro-controllers; others are generally implemented separately but are still commonly used. Looking at a few important devices now will help us understand both the requirements of device interfacing.

Some of these devices are often found as on-chip devices in micro-controllers; others are generally implemented separately but are still commonly used. Looking at a few important devices now will help us understand both the requirements of device interfacing.

Timers and counters are distinguished from one another largely by their use, not their logic. Both are built from adder logic with registers to hold the current value, with an increment input that adds one to the current register value.

However, a timer has its count connected to a periodic clock signal to measure time intervals, while a counter has its count input connected to an aperiodic signal in order to count the number of occurrences of some external event. Because the same logic can be used for either purpose, the device is often called a counter/timer.

Figure 2.6 shows enough of the internals of a counter/timer to illustrate its operation. An n-bit counter/timer uses an n-bit register to store the current state of the count and an array of half subtractors to decrement the count when the count signal is asserted.

Combinational logic checks when the count equals zero; the done output signals the zero count. It is often useful to be able to control the time-out, rather than require exactly 2n events to occur. For this purpose, a reset register provides the value with which the count register is to be loaded. 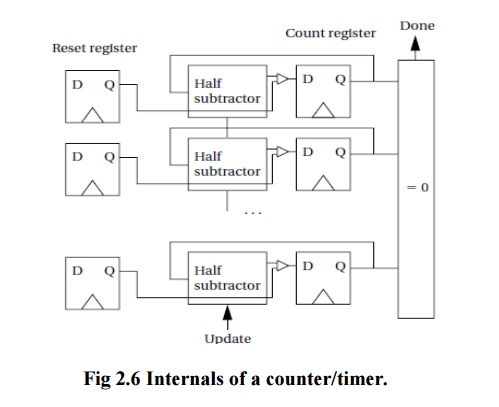 The CPU’s software is designed to periodically reset the watchdog timer, before the timer ever reaches its time-out limit. If the watchdog timer ever does reach that limit, its time-out action is to reset the processor. In that case, the presumption is that either a software flaw or hardware problem has caused the CPU to misbehave. Rather than diagnose the problem, the system is reset to get it operational as quickly as possible. 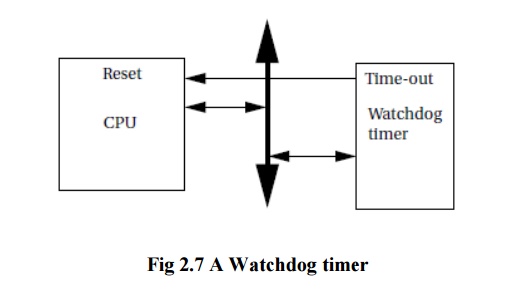 The design of A/D and D/A converters themselves is beyond the scope of this book; we concentrate instead on the interface to the microprocessor bus. Because A/D conversion requires more complex circuitry, it requires a somewhat more complex interface.

Analog/digital conversion requires sampling the analog input before converting it to digital form. A control signal causes the A/D converter to take a sample and digitize it.

There are several different types of A/D converter circuits, some of which take a constant amount of time, while the conversion time of others depends on the sampled value. Variable-time converters provide a done signal so that the microprocessor knows when the value is ready.

A typical A/D interface has, in addition to its analog inputs, two major digital inputs. A data port allows A/D registers to be read and written, and a clock input tells when to start the next conversion.

D/A conversion is relatively simple, so the D/A converter interface generally includes only the data value. The input value is continuously converted to analog form.

Light-emitting diodes (LEDs) are often used as simple displays by themselves, and arrays of LEDs may form the basis of more complex displays. Figure 2.8 shows how to connect an LED to a digital output. 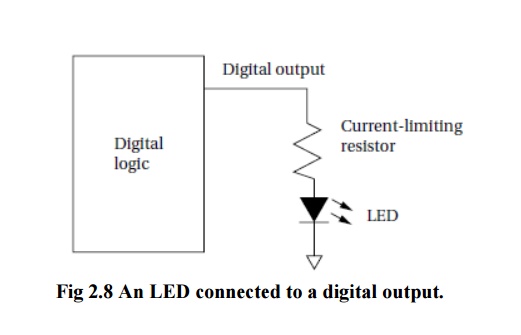 A display device may be either directly driven or driven from a frame buffer. Typically, displays with a small number of elements are driven directly by logic, while large displays use a RAM frame buffer.

The n-digit array, shown in Figure 2.9, is a simple example of a display that is usually directly driven. A single-digit display typically consists of seven segments; each segment may be either an LED or a liquid crystal display (LCD) element.

Display relies on the digits being visible for some time after the drive to the digit is removed, which is true for both LEDs and LCDs.

The digit input is used to choose which digit is currently being updated, and the selected digit activates its display elements based on the current data value.

The display’s driver is responsible for repeatedly scanning through the digits and presenting the current value of each to the display. 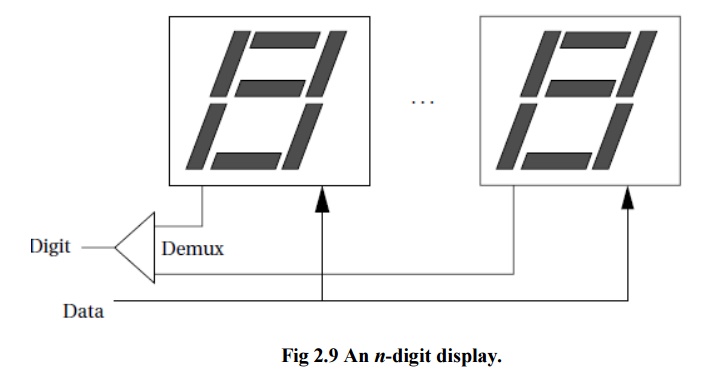 A frame buffer is a RAM that is attached to the system bus. The microprocessor writes values into the frame buffer in whatever order is desired.

The pixels in the frame buffer are generally written to the display in raster order (by tradition, the screen is in the fourth quadrant) by reading pixels sequentially.

Many large displays are built using LCD. Each pixel in the display is formed by a single liquid crystal.

Early LCD panels were called passive matrix because they relied on a two-dimensional grid of wires to address the pixels. Modern LCD panels use an active matrix system that puts a transistor at each pixel to control access to the LCD. Active matrix displays provide higher contrast and a higher-quality display.

A touchscreen is an input device overlaid on an output device. The touchscreen registers the position of a touch to its surface. By overlaying this on a display, the user can react to information shown on the display.

The two most common types of touchscreens are resistive and capacitive. A resistive touchscreen uses a two-dimensional voltmeter to sense position. As shown in Figure 2.10, the touchscreen consists of two conductive sheets separated by spacer balls. The top conductive sheet is flexible so that it can be pressed to touch the bottom sheet. 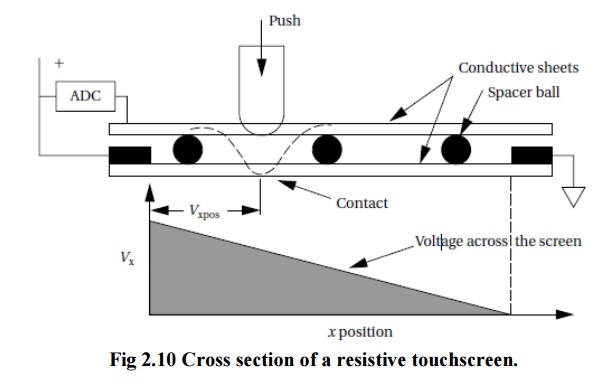 A voltage is applied across the sheet; its resistance causes a voltage gradient to appear across the sheet. The top sheet samples the conductive sheet’s applied voltage at the contact point. An analog/digital converter is used to measure the voltage and resulting position.