It is useful to understand how a high-level language program is translated into instructions.

It is useful to understand how a high-level language program is translated into instructions. Since implementing an embedded computing system often requires controlling the instruction sequences used to handle interrupts, placement of data and instructions in memory, and so forth, understanding how the compiler works can help you know when you cannot rely on the compiler.

Next, because many applications are also performance sensitive, understanding how code is generated can help you meet your performance goals, either by writing high-level code that gets compiled into the instructions you want or by recognizing when you must write your own assembly code.

The compilation process is summarized in Figure 2.19. Compilation begins with high-level language code such as C and generally produces assembly code. (Directly producing object code simply duplicates the functions of an assembler which is a very desirable stand-alone program to have.) 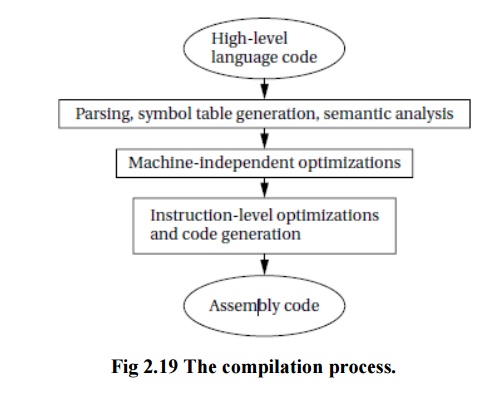 Instruction-level optimizations are aimed at generating code. They may work directly on real instructions or on a pseudo-instruction format that is later mapped onto the instructions of the target CPU. This level of optimization also helps modularize the compiler by allowing code generation to create simpler code that is later optimized. For example, consider the following array access code:

A simple code generator would generate the address for x[i] twice, once for each appearance in the statement. The later optimization phases can recognize this as an example of common expressions that need not be duplicated. While in this simple case it would be possible to create a code generator that never generated the redundant expression, taking into account every such optimization at code generation time is very difficult. We get better code and more reliable compilers by generating simple code first and then optimizing it.