Among the substances that are transported by primaryactive transport are sodium, potassium, calcium, hydrogen, chloride, and a few other ions.

Among the substances that are transported by primaryactive transport are sodium, potassium, calcium, hydrogen, chloride, and a few other ions. The active transport mechanism that has been studied in greatest detail is the sodium-potassium (Na+-K+) pump, a transport process that pumps sodium ions outward through the cell membrane of all cells and at the same time pumps potassium ions from the outside to the inside. This pump is responsible for maintaining the sodium and potassium concentration differences across the cell membrane, as well as for establishing a negative electrical voltage inside the cells. 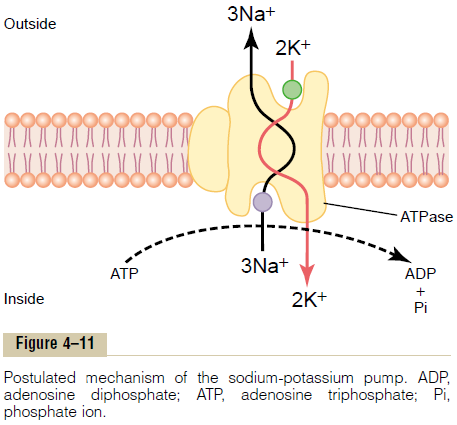 Figure 4â€“11 shows the basic physical components of the Na+-K+ pump. The carrier protein is a complex of two separate globular proteins: a larger one called the a subunit, with a molecular weight of about 100,000, and a smaller one called the b subunit, with a molecular weight of about 55,000. Although the function of the smaller protein is not known (except that it might anchor the protein complex in the lipid membrane), the larger protein has three specific features that are important for the functioning of the pump:

1.              It has three receptor sites for binding sodium ions on the portion of the protein that protrudes to the inside of the cell.

3.              The inside portion of this protein near the sodium binding sites has ATPase activity.

To put the pump into perspective:When two potassium ions bind on the outside of the carrier protein and three sodium ions bind on the inside, the ATPasefunction of the protein becomes activated. This thencleaves one molecule of ATP, splitting it to adenosinediphosphate (ADP) and liberating a high-energyphosphate bond of energy. This liberated energy isthen believed to cause a chemical and conformationalchange in the protein carrier molecule, extruding thethree sodium ions to the outside and the two potassiumions to the inside.

As with other enzymes, the Na+-K+ ATPase pumpcan run in reverse. If the electrochemical gradients forNa+ and K+ are experimentally increased enough sothat the energy stored in their gradients is greater thanthe chemical energy of ATP hydrolysis, these ions willmove down their concentration gradients and the Na+-K+ pump will synthesize ATP from ADP and phosphate.The phosphorylated form of the Na+-K+ pump,therefore, can either donate its phosphate to ADP toproduce ATP or use the energy to change its conformationand pump Na+ out of the cell and K+ into thecell. The relative concentrations of ATP, ADP, andphosphate, as well as the electrochemical gradients forNa+ and K+, determine the direction of the enzymereaction. For some cells, such as electrically activenerve cells, 60 to 70 per cent of the cellsâ€™ energyrequirement may be devoted to pumping Na+ out ofthe cell and K+ into the cell.

Importance of the Na+-K+ Pump for Controlling Cell Volume.

One of the most important functions of the Na+-K+pump is to control the volume of each cell. Withoutfunction of this pump, most cells of the body wouldswell until they burst. The mechanism for controllingthe volume is as follows: Inside the cell are largenumbers of proteins and other organic molecules thatcannot escape from the cell. Most of these are negativelycharged and therefore attract large numbers ofpotassium, sodium, and other positive ions as well. Allthese molecules and ions then cause osmosis of waterto the interior of the cell. Unless this is checked, thecell will swell indefinitely until it bursts. The normal mechanism for preventing this is the Na+-K+ pump. Note again that this device pumps three Na+ ions to the outside of the cell for every two K+ ions pumped to the interior. Also, the membrane is far less perme-able to sodium ions than to potassium ions, so that once the sodium ions are on the outside, they have a strong tendency to stay there. Thus, this represents a net loss of ions out of the cell, which initiates osmosis of water out of the cell as well.

If a cell begins to swell for any reason, this auto-matically activates the Na+-K+ pump, moving still more ions to the exterior and carrying water with them. Therefore, the Na+-K+ pump performs a continual sur-veillance role in maintaining normal cell volume.

Electrogenic Nature of the Na+-K+ Pump. The fact that theNa+-K+ pump moves three Na+ ions to the exterior for every two K+ ions to the interior means that a net of one positive charge is moved from the interior of the cell to the exterior for each cycle of the pump. This creates pos-itivity outside the cell but leaves a deficit of positive ions inside the cell; that is, it causes negativity on the inside. Therefore, the Na+-K+ pump is said to be electrogenic because it creates an electrical potential across the cell membrane. As discussed, this electrical potential is a basic requirement in nerve and muscle fibers for transmitting nerve and muscle signals.

Another important primary active transport mecha-nism is the calcium pump. Calcium ions are normally maintained at extremely low concentration in the intracellular cytosol of virtually all cells in the body, at a concentration about 10,000 times less than that in the extracellular fluid. This is achieved mainly by two primary active transport calcium pumps. One is in the cell membrane and pumps calcium to the outside of the cell. The other pumps calcium ions into one or more of the intracellular vesicular organelles of the cell, such as the sarcoplasmic reticulum of muscle cells and the mitochondria in all cells. In each of these instances, the carrier protein penetrates the membrane and functions as an enzyme ATPase, having the same capability to cleave ATP as the ATPase of the sodium carrier protein. The difference is that this protein has a highly specific binding site for calcium instead of for sodium.

At two places in the body, primary active transport of hydrogen ions is very important: (1) in the gastric glands of the stomach, and (2) in the late distal tubules and cortical collecting ducts of the kidneys.

In the gastric glands, the deep-lying parietal cells have the most potent primary active mechanism for transporting hydrogen ions of any part of the body. This is the basis for secreting hydrochloric acid in the stomach digestive secretions. At the secretory ends of the gastric gland parietal cells, the hydrogen ion con-centration is increased as much as a millionfold and then released into the stomach along with chloride ions to form hydrochloric acid.

Thus, in terms of calories, the amount of energy required to concentrate 1 osmole of substance 10-fold is about 1400 calories; or to concentrate it 100-fold, 2800 calories. One can see that the energy expenditure for concentrating substances in cells or for removing substances from cells against a concentration gradient can be tremendous. Some cells, such as those lining the renal tubules and many glandular cells, expend as much as 90 per cent of their energy for this purpose alone.