The principle of osmosis is used to pre-serve jams, jellies and pickles.

The principle of osmosis is used to pre-serve jams, jellies and pickles. In this process, water tends to draw out from microbes (plasmolysis) and makes it dehy-drated, thus killing them. But yeasts and moulds are relatively resistant to high osmotic pressure. Hence, preserved foods like pickles tend to spoil if not stored properly. 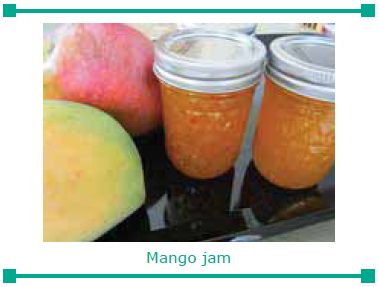 Sugar is used to preserve fruits. Preserving fruits in honey to avoid spoilage is a well known practice. Nowadays jams and jellies prepared from fruits have a high concen-tration of sugar and it acts as a preserva-tive. Pectin, acid and sugar are essential to prepare jam. Jam or jelly are prepared by adding commercially prepared pectin and it also reduces the cooking time. Jellies are clear substances made of fruit juice or the extract of a fruit.

Sugar acts in the following ways:

·        Sugar draws the water out of food therefore making it unavailable for microorganisms.

·        As a result of water loss, microbial metabolism is stopped.

·        Hence, the growth of microorganisms is stopped

·        Under-ripe fruits are used, because the pectin content is high and good acidity is essential for a good jelly.

·        Pieces of fruit are completely immersed in water and cooked for 10–20 min-utes. Hard fruits like guavas need to be cooked for 45 minutes.

·        After the fruit is cooked, it is strained without disturbing the fruit pieces.

·        The fruit extracts contain pectin which determines the addition of sugar. When the level of pectin is high, it needs more sugar but requires less boiling time.

·        Then the jelly is poured in bottles or moulds, and allowed to set without any disturbance.

·        After it is cooked, it is transferred to a sterilized bottle and allowed to cool.

Test for doneness for jam

Sheet test – the mixture is allowed to drip from a large cool spoon. If the syrup forms a sheet instead of two separate drops, the jam is done.

Bubble test – when the end point reaches, big bubbles can be seen throughout the jam.

Plate test – set a plate in the freezer for some time. Put the jam and tilt the plate slowly. The jam should come down as a whole mass forming “U” shape. Water should not separate out.

Fork test – dip the fork into the jam or jelly. Jam of correct consistency forms a sheet between the needles of the fork.

Honey is a natural preservative in its orig-inal state and was one of the earliest pre-servatives used by ancient civilizations. It has a high concentration of sugar that draws out the water out of yeast or bacte-ria cells which contaminate the food.

Foods are also preserved by the principle of osmotic pressure in salting and pick-ling. Most commonly used preservative is sodium chloride. Required quantity may be added to slow down or prevent the growth of microorganisms or enough to permit lactic acid fermentation to take place. 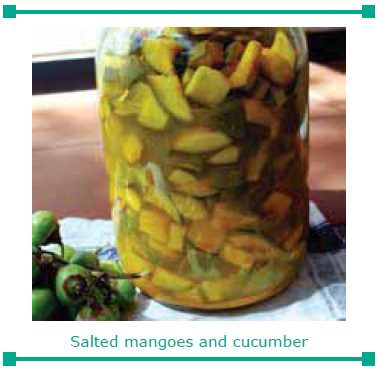 Sodium chloride preserves the food by the following principles:

·        It causes the high osmotic pressure and hence plasmolysis occurs.

·        It dehydrates foods by drawing out and tying up moisture, as it dehydrates microbial cell.

•     It ionizes to yield the chlorine ion which is harmful to organisms.

·        It reduces the solubility of oxygen in the moisture.

·        It sensitizes the cell against carbon dioxide.

·        It interferes with the action of pro-teolytic enzymes.

In pickling, food is placed in edible liq-uids like brine, vinegar or vegetable oil which inhibit or kill microorganisms.

Sometimes, food is heated along with pickling agent so that it gets saturated with it.

Pickles may be broadly divided into three groups:

The important preservative agents in pickles are salt, vinegar, sugar, oil, spices and condiments. Each has a specific role in preservation. 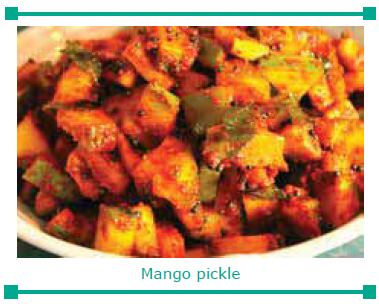 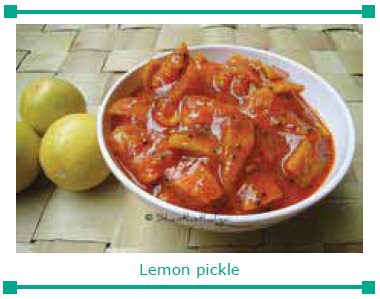 Vinegar is a natural preservative. Vinegar is made from a two step process. The first process involves the carbohydrate being converted into alcohol by fermentation. The second step is its conversion to an acetic acid. The acetic acid in vinegar kills microbes and stops food spoilage. Pickling is a common method of using vinegar as a preservative. It is also used to improve the flavour of foods.

These have bacteriostatic effect (slowing the growth and multiplication of microbes). The essential oil of spices is inhibitor of microorganism. The inhibitory effects of the spices differ with the kind of spice and the microorganisms being tested. Mustard flour and the volatile oil of mus-tard, for example, are very effective against Saccharomyces cerevisiae. In pickles like avakai and chilli pickle, mustard flour helps in the prevention of the growth of spoilage organisms in the food.

Turmeric powder, tamarind, chilli powder, asafoetida, fenugreek seed, cin-namon and cloves are usually bacterio-static. Ground pepper corn and all spices are less inhibitory than cinnamon and cloves. Extracts of these plants have been shown to be inhibitory to Bacillus subtilis and E. coli. Allicin is the active principle in onions and garlic that kills bacteria and acts against fungi.

In addition to salt and several spices, oils are used in making pickles. Spice mixtures and oil are added to the fruit or vegetable. It is allowed to ferment for a month or so. The fermentation process renders fruits soft and the fruit take on the additional aroma and flavour of the spices. Aerobic bacteria and mould growth are prevented by covering the top with oil. Properly pre-pared and stored pickles can last upto a year or more without spoilage.