Primary and secondary alkylamines can be alkylated to secondary and ter-tiary alkylamines, respectively, by reaction with an alkyl halide. Primary alkylamines can also be synthesized if ammonia is used instead of an alkyl-amine. However, these reactions are difficult to control and over-alkylation is common. Reductive amination is a more controlled method of adding an extra alkyl group to an amine, where the amine (or ammonia) is treated with an aldehyde or a ketone in the presence of a reducing agent (sodium cyanoborohydride). Alternatively, primary and secondary amines can be acylated with an acid chloride or acid anhydride and then reduced with LiAlH4 to give a secondary and tertiary amine, respectively.

Amino groups cannot be directly introduced to an aromatic ring. However, nitro groups can be added directly by electrophilic substitution, then reduced to the amine. Once the amine is present, reactions such as alkyla-tion, acylation, or reductive amination can be carried out as described for alkylamines.

The overall reaction is equivalent to replacing the halogen atom of the alkyl halide with an NH2 unit. Another method of achieving the same result is the Gabriel synthesis of amines. This involves treating phthalimide with KOH toabstract the N–H proton (Fig. 2). The N–H proton of phthalimide is more acidic (pKa 9) than the N–H proton of an amide since the anion formed can be stabilized by resonance with both neighboring carbonyl groups. The phthalimide ion can then be alkylated by treating it with an alkyl halide in a nucleophilic substitution. Subsequent hydrolysis  releases a primary amine (Fig. 3). 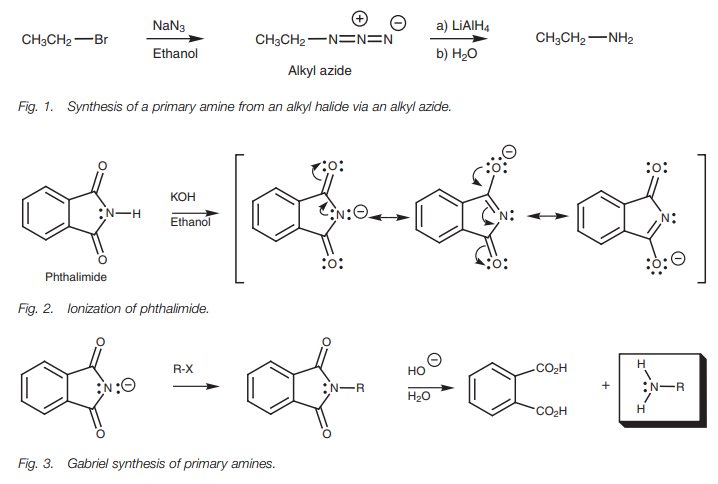 A third possible method is to react an alkyl halide with ammonia, but this is less satisfactory since over-alkylation is possible (see below). The reaction of an alde-hyde with ammonia by reductive amination is a fourth method of obtaining primary amines (see below).

It is possible to convert primary and secondary amines to secondary and tertiary amines respectively, by alkylation with alkyl halides by the SN2 reaction. However, over-alkylation can be a problem and better methods of amine syn-thesis are available.

Reductive amination is a more controlled method of adding an extra alkyl group to an alkylamine (Fig. 4). Primary and secondary alkylamines can be treated with a ketone or an aldehyde in the presence of a reducing agent called sodium cyanoborohydride. The alkylamine reacts with the carbonyl compound by nucleo-philic addition followed by elimination to give an imine or an iminium ion which is immediately reduced by sodium cyanoborohydride to give the final amine. Overall, this is the equivalent of adding one extra alkyl group to the amine. Therefore, primary amines are converted to secondary amines and secondary amines are converted to tertiary amine. The reaction is also suitable for the synthesis of primary amines if ammonia is used instead of an alkylamine. The reaction goes through an imine intermediate if ammonia or a primary amine is used (Fig. 4a). When a secondary amine is used, an iminium ion intermediate is involved (Fig. 4b).

An alternative way of alkylating an amine is to acylate the amine to give an amide, and then carry out a reduction with LiAlH4. Although two steps are involved, there is no risk of over-alkylation since acylation can only occur once.

In both reactions, the alkyl group (R) is transferred from the carbonyl group to the nitrogen to form an intermediate isocyanate (O=C=N–R). This is then hydrolyzed by water to form carbon dioxide and the primary amine. The Curtius rearrangement has the added advantage that nitrogen is lost as a gas which helps to drive the reaction to completion.

The direct introduction of an amino group to an aromatic ring is not possible. However, nitro groups can be added directly by electrophilic substitution and then reduced to the amine. The reduction is carried out under acidic conditions resulting in an arylaminium ion as product. The free base can be isolated by basifying the solution with sodium hydroxide to precipitate the arylamine.

Once an amino group has been introduced to an aromatic ring, it can be alkyl-ated with an alkyl halide, acylated with an acid chloride or converted to a higher amine by reductive animation as described for an alkylamine.