Primary alkyl halides can be treated with the cyanide ion and converted to nitriles of general formula RCH2CN.

Primary alkyl halides can be treated with the cyanide ion and converted to nitriles of general formula RCH2CN. Primary amides can be dehydrated with thionyl chloride or phosphorus pentoxide to give a nitrile.

The nitrile group is linear in shape with both the carbon and nitrogen being sp hybridized. The triple bond is made up of oneσbond and twoπbonds.The nitrile group is polarized such that the nitrogen is a nucleophilic center and the carbon is an electrophilic center. Nucleophiles react with nitriles at the electrophilic carbon center to form an imine intermediate which reacts further depending on the reaction conditions.

Nitriles can be hydrolyzed to carboxylic acids on treatment with aqueous acid or base. The reaction involves the formation of an intermediate pri-mary amide. Nitriles can be converted to primary amines by reduction with lithium aluminum hydride. The reaction involves addition of two hydride ions. With a milder reducing agent such as DIBAH, only one hydride ion is added and an aldehyde is obtained. Nitriles react with Grignard reagents to produce ketones. The Grignard reagent provides the equivalent of a car-banion which reacts with the electrophilic carbon center of the nitrile group.

The presence of a nitrile group is indicated by a CN stretching absorption in the IR spectrum and a quaternary carbon signal in the 13C nmr spectrum.

Nitriles are commonly prepared by the SN2 reaction of a cyanide ion with a primary alkyl halide. However, this limits the nitriles which can be synthesized to those having the following general formula RCH2CN. A more general synthesis of nitriles involves the dehydration of primary amides with reagents such as thionyl chloride or phosphorus pentoxide (Fig. 1). 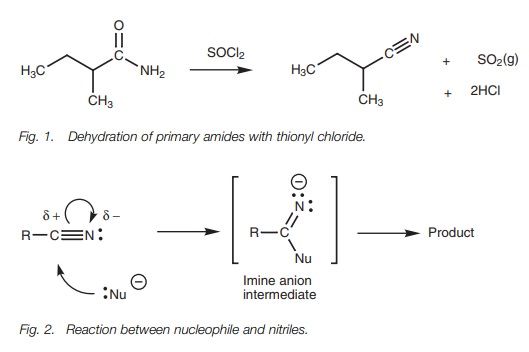 The nitrile group (CN) is linear in shape with both the carbon and the nitrogen atoms being sp hybridized. The triple bond linking the two atoms consists of one σ bond  and  two  π  bonds.  Nitriles  are  strongly  polarized.  The  nitrogen  is  a nucleophilic center and the carbon is an electrophilic center. Nucleophiles react with nitriles at the electrophilic carbon (Fig. 2). Typically, the nucleophile will forma bond to the electrophilic carbon resulting in simultaneous breaking of one of the bonds. The π electrons end up on the nitrogen to form ansp2 hybridized imine anion which then reacts further to give different products depending on the reaction conditions used.

Nitriles (RCN) are hydrolyzed to carboxylic acids (RCO2H) in acidic or basic aqueous solutions. The mechanism of the acid-catalyzed hydrolysis (Fig. 3) involves initial protonation of the nitrile’s nitrogen atom. This activates the nitrile group towards nucleophilic attack by water at the electrophilic carbon. One of the nitrile π bonds breaks simultaneously and both the π electrons move onto the nitrogen resulting in a hydroxy imine. This rapidly isomerizes to a primary amide which is hydrolyzed under the reaction conditions  to give the carboxylic acid and ammonia.

Nitriles (RCN) can be reduced to primary amines (RCH2NH2) with lithium alu-minum hydride which provides the equivalent of a nucleophilic hydride ion. The reaction can be explained by the nucleophilic attack of two hydride ions (Fig. 4).

With a milder reducing agent such as DIBAH (diisobutylaluminum hydride), the reaction stops after the addition of one hydride ion, and an aldehyde is obtained instead (RCHO).

Nitriles can be treated with Grignard reagents or organolithium reagents  to give ketones (Fig. 5).

Grignard reagents provide the equivalent of a nucleophilic carbanion which can attack the electrophilic carbon of a nitrile group (Fig. 6). One of the π bonds is broken simultaneously resulting in an intermediate imine anion which is converted to a ketone when treated with aqueous acid.

The carbon of the nitrile group gives a quaternary signal in the 13C nmr spectrum which is typically in the region 114–124 ppm.

If a single nitrile group is present, the molecular ion in the mass spectrum must be an odd number due to the presence of nitrogen.