Amines can be chiral if they have three different substituents. However, it is not possible to separate enantiomers since they can easily interconvert by pyramidal inversion. The process involves a planar intermediate where the nitrogen has changed from sp3  hybridization to sp2  hybridization and the lone pair of electrons are in a p orbital. Pyramidal inversion is not possible for chiral quaternary ammonium salts and enantiomers of these structures can be separated.

Amines are weak bases which are in equilibrium with their ammonium ion in aqueous solution. The basic strength of an amine is indicated by its pKb value. There are two main effects on basic strength. Alkyl groups have an inductive effect which stabilizes the ammonium ion and results in increased basicity. Solvation of the ammonium ion by water stabilizes the ion and increases basicity. The more hydrogen bonds which are possible between the ammonium ion and water, the greater the stability and the greater the basicity. The alkyl inductive effect is greates t for ammonium ions formed from tertiary amines, whereas the solvation effect is greatest for ammoniumions  formed  from  primary  amines.  In  general,  primary  and  secondary amines  are  stronger  bases  than  tertiary  amines.  Aromatic  amines  are weaker bases than aliphatic amines since nitrogen’s lone pair of electrons interacts with the π system of the aromatic ring, and is less likely to form a bond to aproton. Aromatic substituents affect basicity. Activating sub- stituents increase electron density in the aromatic ring which helps to stabi- lize the ammonium ion and increase basic strength. Deactivating groups have the opposite effect. Substituents capable of interacting with the aro-matic ring by resonance have a greater effect on basicity if they are at theortho or para positions.

Amines react as nucleophiles or bases since they have a readily available lone pair of electrons which can participate in bonding. Primary and sec-ondary amines can act as weak electrophiles or acids with a strong base, by losing an N–H proton to form an amide anion (R2N-).

Evidence for primary and secondary amines include N–H stretching and bending absorptions in the IR spectrum as well as a D2O exchangeable proton in the 1H nmr spectrum.

The nitrogen atom has four sp3 hybridized orbitals pointing to the corners of a tetrahedron in the same way as ansp3 hybridized carbon atom. However, one of the sp3 orbitals is occupied by the nitrogen’s lone pair of electrons. This means that the atoms in an amine functional group are pyramidal in shape. The C–N–C bond angles are approximately 109° which is consistent with a tetrahedral nitrogen. However, the bond angle is slightly less than 109° since the lone pair of electrons demands a slightly greater amount of space than a σ bond.

Since amines are tetrahedral, they are chiral if they have three different substituents. However, it is not possible to separate the enantiomers of a chiral amine since amines can easily undergo pyramidal inversion – a process which interconverts the enantiomers (Fig. 1). The inversion involves a change of hybridization where the nitrogen becomes sp2 hybridized rather than sp3hybridized. As a result, the molecule becomes planar and the lone pair of elec-trons occupy a p orbital. Once the hybridization reverts back to sp3, the molecule can either revert back to its original shape or invert.

However, all amines can participate in hydrogen bonding with protic solvents, which means that amines have similar water solubilities to comparable alcohols.

Amines are weak bases but they are more basic than alcohols, ethers, or water. As a result, amines act as bases when they are dissolved in water and an equilibrium is set up between the ionized form (the ammonium ion) and the unionized form (the free base; Fig. 2).

The basic strength of an amine can be measured by its pKb value. The lower the value of pKb, the stronger the base. The pKb for ammonia is 4.74, which compares with pKb values for methylamine, ethylamine, and propy-lamine of 3.36, 3.25 and 3.33, respectively. This demonstrates that larger alkyl groups increase base strength. This is an inductive effect whereby the ion is stabi-lized by dispersing some of the positive charge over the alkyl group (Fig. 3). This shifts the equilibrium of the acid base reaction towards the ion, which means that the amine is more basic. The larger the alkyl group, the more significant this effect.

Further alkyl substituents should have an even greater inductive effect and one might expect secondary and tertiary amines to be stronger bases than primary amines. This is not necessarily the case and there is no direct relationship between basicity and the number of alkyl groups attached to nitrogen. The inductive effect of more alkyl groups is counterbalanced by a solvation effect.

Once the ammonium ion is formed, it is solvated by water molecules – a stabilizing factor which involves hydrogen bonding between the oxygen atom of water and any N–H group present in the ammonium ion (Fig. 4). The more hydro-gen bonds which are possible, the greater the stabilization. As a result, solvation and solvent stabilization is stronger for alkylaminium ions formed from primary amines than for those formed from tertiary amines. The solvent effect tends to be more important than the inductive effect as far as tertiary amines are concerned and so tertiary amines are generally weaker bases than primary or secondary amines. 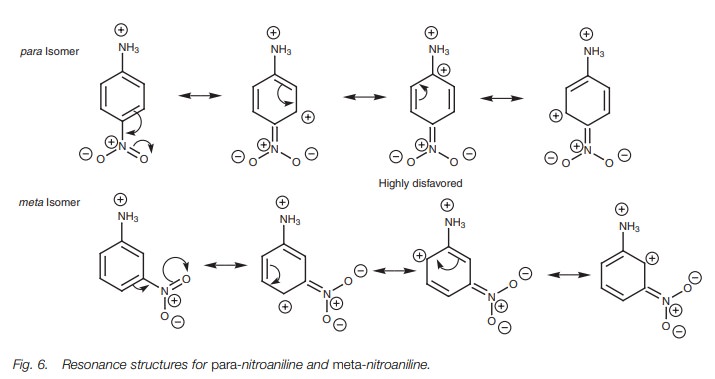 If an activating substituent is present, capable of interacting with the ring by resonance, the opposite holds true and the para isomer will be a stronger base than the meta isomer. This is because the crucial resonance structure mentioned above would have a negative charge immediately next to the ammonium ion and this would have a stabilizing effect..

Amines react as nucleophiles or bases, since the nitrogen atom has a readily available lone pair of electrons which can participate in bonding (Fig. 7). As a result, amines react with acids to form water soluble salts. This allows the easy separation of amines from other compounds. A crude reaction mixture can be extracted with dilute hydrochloric acid such that any amines present are protonated and dissolve into the aqueous phase as water-soluble salts. The free amine can be recovered by adding sodium hydroxide to the aqueous solution such that the free amine precipitates out as a solid or as an oil.

Amines will also react as nucleophiles with a wide range of electrophiles includ-ing alkyl halides, aldehydes, ketones, and acid chlorides.

The N–H protons of primary and secondary amines are weakly electrophilic or acidic and will react with a strong base to form amide anions. For example, diiso-propylamine (pKa ~40) reacts with butyllithium to give lithium diisopropylamide (LDA) and butane.

Naturally, these absorptions are not present for tertiary amines. For aromaticamines,  an  absorption  due  to  Ar–N  stretching  may  be  visible  in  the  region1360–1250 cm−1.

The 1H nmr spectrum of a primary or secondary amine will show a broad sig- nal for the N–H proton in the region 0.5–4.5 ppm which will disappear from the spectrum if the sample is shaken with deuterated water. For aromatic amines this signal is typically in the range 3–6 ppm. The chemical shifts of neighboring groups can also indicate the presence of an amine group indirectly. For example, an N-methyl group gives a singlet near 2.3 ppm in the 1H spectrum and appears in the region 30–45 ppm in the 13C spectrum.

If the molecular ion in the mass spectrum has an odd number, this indicates that an odd number of nitrogen atoms are present in the molecule. This supports the presence of an amine but does not prove it, since there are other functional groups containing nitrogen. Amines undergo α-cleavage when they fragment (i.e. cleavage next to the carbon bearing the amine group.