Ammonia, primary amines, and secondary amines can be alkylated with alkyl halides to give primary, secondary, and tertiary amines, respectively.

Ammonia, primary amines, and secondary amines can be alkylated with alkyl halides to give primary, secondary, and tertiary amines, respectively. However, over-alkylation usually occurs and mixtures are obtained. The method is best used for converting tertiary amines to quaternary ammo-nium salts. A better method of alkylating a primary or secondary amine is to treat the amine with an aldehyde or ketone in the presence of a reducing agent. Reaction of the amine with the carbonyl compound produces an intermediate imine which is reduced to the amine. No over-alkylation takes place.

Primary and secondary amines can be acylated with an acid chloride or acid anhydride to give secondary and tertiary amides, respectively.

Primary and secondary amines can be sulfonylated with a sulfonyl chloride to give a sulfonamide.

Primary amines can be converted to alkenes if the amine is first methylated to a quaternary ammonium salt, then treated with silver oxide. Elimination of triethylamine takes place to give the least substituted alkene. The reac-tion is known as the Hofmann elimination. The reaction can also be carried out on secondary and tertiary amines although a mixture of alkenes may be formed depending on the substituents present. Aromatic amines will also react if they contain a suitable N-alkyl substituent.

Aromatic amines undergo electrophilic aromatic substitutions. The amino group is strongly activating and directs substitution to the ortho and para positions. Nitration, sulfonation, and bromination are all possible, but bromination may occur more than once. Friedel–Crafts alkylation and acylation are not possible since the amino group complexes the Lewis acid involved in the reaction. The problems of excess bromination and Lewis acid complexation can be overcome by converting the amine to an amide before carrying out the substitution reaction. The amide can be hydrolyzed back to the amine once the substitution reaction has been carried out.

Aromatic primary amines can be converted to diazonium salts on treatment with nitrous acid. These salts are extremely important in aromatic chemistry since they can be converted to a variety of other substituents. Diazonium salts also react with phenols or aromatic amines in a process called diazo-nium coupling to produce a highly conjugated system which is usually colored. Such products are often used as dyes.

Alkylation of tertiary amines by this method is a good way of obtaining quaternary ammonium salts (Fig. 1b) since no other products are possible. However, alkylation of lower order amines is not so satisfactory.

A better method of alkylating a primary or secondary amine is to treat the amine with a ketone or an aldehyde in the presence of a reducing agent – sodium cyanoborohydride. This reaction is known as a reductive amination. Over-alkylation cannot occur by this method.

Primary and secondary amines (both aromatic and aliphatic) can be acylated with an  acid  chloride  or  acid  anhydride  to  form  secondary  and  tertiary  amides, respectively. This reaction can be viewed as the acylation of an amine or as the nucleophilic substitution of a carboxylic acid derivative.

In a similar reaction to acylation, primary and secondary amines (both aromatic and aliphatic) can be treated with a sulfonyl chloride to give a sulfonamide (Fig.3). Tertiary amines do not give a stable product and are recovered unchanged.

Primary amines could be converted to alkenes if it was possible to eliminate ammonia from the molecule. However, the direct elimination of ammonia is not possible. A less direct method of achieving the same result is to exhaustively methylate the amine by the SN2 reaction to give a quaternary ammonium salt. Once this is formed, it is possible to eliminate triethylamine in the presence of silver oxide and to form the desired alkene. The reaction is called the Hofmann elimination (Fig. 4). The silver oxide provides a hydroxyl ion which acts as the base for an E2 elimination. However, unlike most E2 eliminations, the less substituted alkene is preferred if a choice is available (Fig. 6). The reason for this preference is not fully understood, but may have something to do with the large bulk of the triethylamine leaving group hindering the approach of the hydroxide ion such that it approaches the least hindered β-carbon.\ 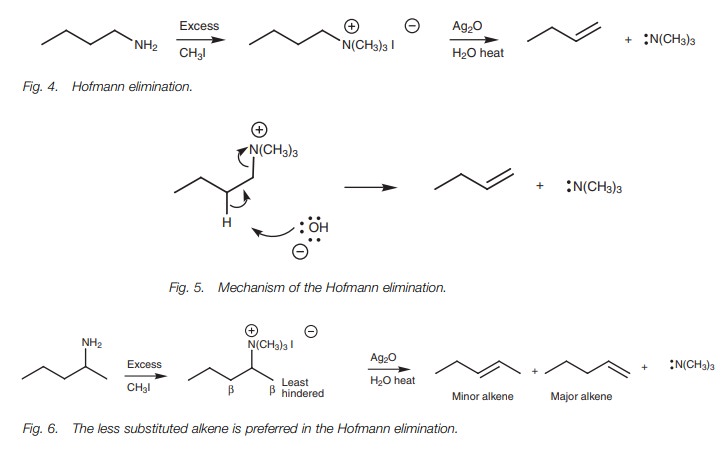 Secondary and tertiary amines can also be exhaustively methylated then treated with silver oxide. However, mixtures of different alkenes may be obtained if the N-substituents are different alkyl groups (Fig. 7). 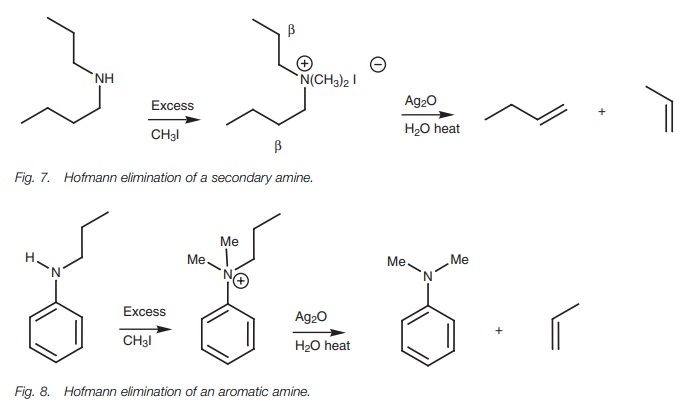 The Hofmann elimination is not possible with primary arylamines, but sec-ondary and tertiary arylamines will react if one of the substituents is a suitable alkyl group. Elimination of the aromatic amine can then occur such that the alkyl substituent is converted to the alkene (Fig. 8).

Anilines can be sulfonated and nitrated, but the Friedel–Crafts alkylation and acylation are not possible since the amino group forms an acid base complex with the Lewis acid required for this reaction. One way round this is to convert the aniline to the amide as above before carrying out the reaction. 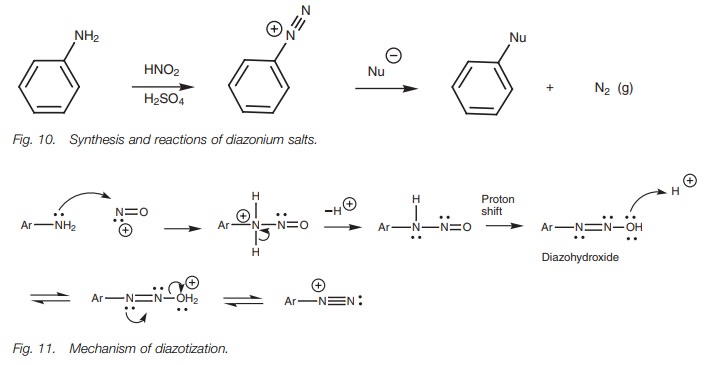 Reaction of an aniline with nitrous acid results in the formation of the stable diazonium salt in a process called diazotization (Fig. 11). In the strong acid condi-tions used, the nitrous acid dissociates to form an +NO ion which can then act as an electrophile. The aromatic amine uses its lone pair of electrons to form a bond to this +NO ion. Loss of a proton from the intermediate formed, followed by a pro-ton shift leads to the formation of a diazohydroxide. The hydroxide group is now protonated turning it into a good leaving group, and a lone pair from the aryl nitrogen forms a second π bond between the two nitrogen atoms and expels water.

Once the diazonium salt has been formed, it can be treated with various nucleo-philes such as Br- , Cl- , I- , -CN and -OH (Fig. 12). The nucleophile displaces nitrogen from the aromatic ring and the nitrogen which is formed is lost from the reaction mixture as a gas, thus helping to drive the reaction to completion. Those reactions involving Cu(I) are also known as the Sandmeyer reaction. 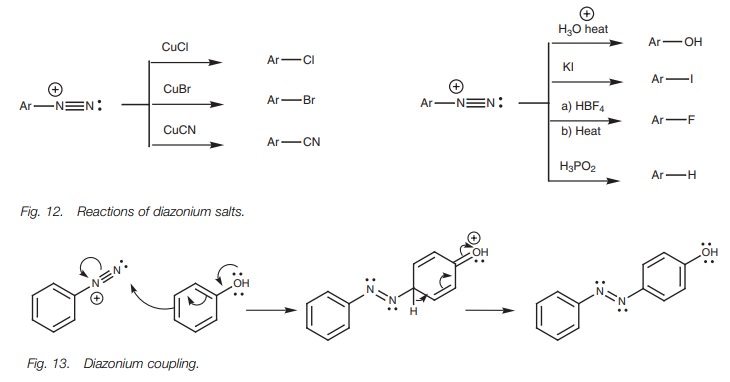 Diazonium salts are also used in a reaction called diazonium coupling where the diazonium salt is coupled to the para position of a phenol or an arylamine (Fig.13). The azo products obtained have an extended conjugated system whichincludes both aromatic rings and the N=N link. As a result, these compounds are often colored and are used as dyes.

The above coupling is more efficient if the reaction is carried out under slightly alkaline conditions (NaOH) such that the phenol is ionized to a phenoxide ion (ArO- ). Phenoxide ions are more reactive to electrophilic addition than phenols themselves. Strong alkaline conditions cannot be used since the hydroxide ion adds to the diazonium salt and prevents coupling. If the para position of the phe-nol is already occupied, diazo coupling can take place at the ortho position instead.

Aliphatic amines, as well as secondary and tertiary aromatic amines, react with nitrous acid, but these reactions are less useful in organic synthesis.