Reactions of ethers, epoxides, and thioethers

Ethers are unreactive functional groups, but can be cleaved by strong acids such as HI or HBr.

REACTIONS OF ETHERS, EPOXIDES, AND THIOETHERS

Ethers are unreactive functional groups, but can be cleaved by strong acids such as HI or HBr. Primary and secondary ethers react by the SN2 mecha-nism to produce the least substituted alkyl halide and an alcohol. If the alco-hol is primary, further reaction may occur to convert this to an alkyl halide as well. Tertiary ethers are cleaved by the SN1 reaction under milder condi-tions. However, an elimination reaction (E1) may occur in preference to the SN1 reaction resulting in formation of an alcohol and an alkene. Trifluoro-acetic acid can be used in such situations in place of HX. Most ethers react slowly with atmospheric oxygen to produce peroxides and hydroperoxides which can prove to be explosive.

Epoxides are more reactive to nucleophiles than ethers since an SN2 reaction relieves ring strain by opening up the ring. Hydrolysis under acidic or basic conditions converts epoxides to 1,2-diols which are trans to each other in cyclic systems. Treatment with hydrogen halides produces 1,2-halohydrins and treatment with Grignard reagents allows the formation of C–C bonds with simultaneous formation of an alcohol. Nucleophiles will attack unsymmetrical epoxides at the least substituted carbon when basic reaction conditions are employed. Under acidic reaction conditions, nucleophiles will prefer to attack the most substituted carbon atom.

Thioethers are nucleophilic. The sulfur atom can act as a nucleophilic cen- ter and take part in an SN2 reaction with alkyl halides to form a trialkylsul fonium salt (R2SR’+). This in turn can be treated with base to form a sulphur ylide (R2S+-CR2- ) where the sulfur can stabilize the neighboring negative charge. Sulfur ylides can be used to synthesize epoxides from aldehydes or ketones. Thioethers can be oxidized to sulfoxides and sulfones, and can be reduced to alkanes.

The initial protonation is essential since it converts a poor leaving group (an alkoxide ion) into a good leaving group (the alcohol). Primary alcohols formed from this reaction may be converted further to an alkyl halide. Tertiary ethers react by the SN1 mechanism to produce the alcohol. However, an alkene may also be formed due to E1 elimination and this may be the major product (Fig. 3).

Trifluoroacetic acid can be used instead of HX, resulting in an E1 reaction and production of the alcohol and the alkene.

A problem with most ethers is their slow reaction with atmospheric oxygen by a radical process to form hydroperoxides (ROOH) and peroxides (ROOR). These products can prove to be explosive if old solvents are concentrated to dryness.

Epoxides are cyclic ethers, but they are more reactive than normal ethers because of the ring strain involved in a three-membered ring. Therefore, ring opening through an SN2 nucleophilic substitution is a common reaction of epoxides. For example, epoxides can be ring-opened under acidic or basic conditions to give a 1,2-diol (Fig. 4). In both cases, the reaction involves an SN2 mechanism with the incoming nucleophile attacking the epoxide from the opposite direction of the epoxide ring. This results in a trans arrangement of the diol system when the reaction is carried out on cycloalkane epoxides. Under acidic conditions (Fig.5), the epoxide oxygen is first protonated, turning it into a better leaving group(Step 1). Water then acts as the nucleophile and attacks one of the electrophilic carbon atoms of the epoxide. Water uses a lone pair of electrons to form a new bond to carbon and as it does so, the C–O bond of the epoxide cleaves with both electrons moving onto the epoxide oxygen to neutralize the positive charge (Step 2). 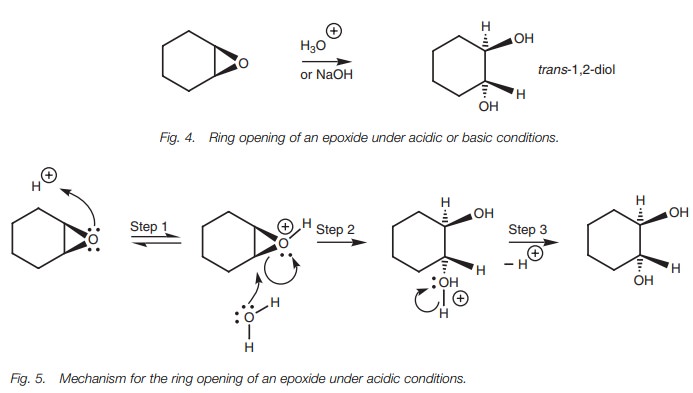 Although water is a poor nucleophile, the reaction is favored due to the neutralization of the positive charge on oxygen and the relief of ring strain once the epoxide is opened up. Unlike other SN2 reactions of course, the leaving group is still tethered to the molecule.

Ring opening under basic conditions is also possible with heating, but requires the loss of a negatively charged oxygen (Fig. 6). This is a poor leaving group and would not occur with normal ethers. It is only possible here because the reaction opens up the epoxide ring and relieves ring strain. 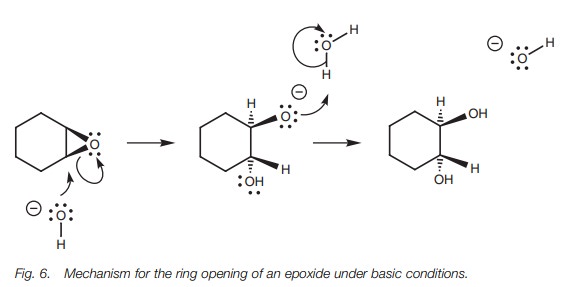 Ring opening by the SN2 reaction is also possible using nucleophiles other than water. With unsymmetrical epoxides, the SN2 reaction will occur at the least sub-stituted position if it is carried out under basic conditions (Fig. 7). However, under acidic conditions, the nucleophile will usually attack the most substituted position (Fig. 8). This is because the positive charge in the protonated intermediate is shared between the oxygen and the most substituted carbon. This makes the more substituted carbon more reactive to nucleophiles. 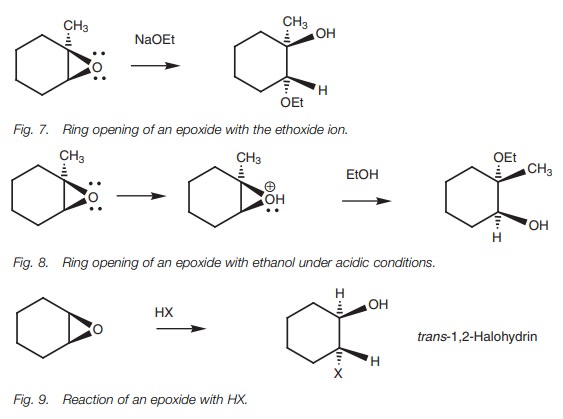 The reaction of epoxides with hydrogen halides (Fig. 9) is analogous to the reac-tion of normal ethers with HX. Protonation of the epoxide with acid is followed by nucleophilic attack by a halide ion resulting in 1,2-halohydrins. The halogen and alcohol groups will also be in a trans arrangement if the reaction is done on an epoxide linked to a cyclic system.

Unlike ethers, epoxides undergo the SN2 reaction with a Grignard reagent (Fig. 10).

Unlike ethers, thioethers make good nucleophiles due to the sulfur atom. This is because the sulfur atom has its valence electrons further away from the nucleus. As a result, these electrons experience less attraction from the nucleus, making them more polarizable and more nucleophilic. Since they are good nucleophiles, thioethers can react with alkyl halides to form trialkylsulfonium salts (R3S+ ;Fig. 11) – a reaction which is impossible for normal ethers. Sulfur is also able to stabilize a negative charge on a neighboring carbon atom, especially when the sulfur itself is positively charged. This makes the protons on neighboring carbons acidic, allowing them to be removed with base to form sulfur ylides. 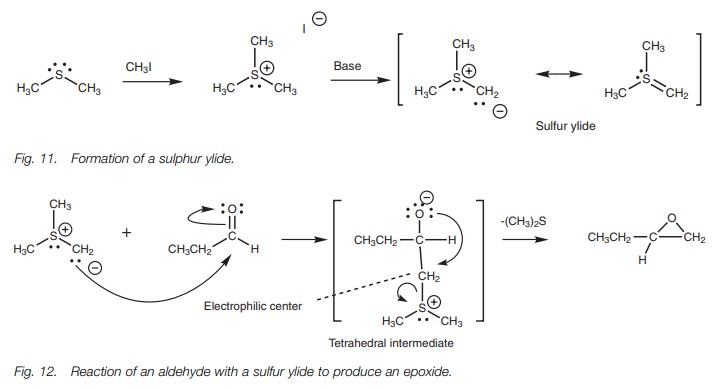 Sulfur ylides are useful in the synthesis of epoxides from aldehydes or ketones (Fig. 12). They undergo a typical nucleophilic addition with the carbonyl group to form the expected tetrahedral intermediate. This intermediate now has a very good thioether leaving group which also creates an electrophilic carbon atom at the neighboring position. Therefore, the molecule is set up for further reaction which involves the nucleophilic oxygen anion displacing the thioether and forming an epoxide.

Thioethers can also be oxidized with hydrogen peroxide to give a sulfoxide (R2SO) which, on oxidation with a peroxyacid, gives a sulfone (R2SO2; Fig. 13). 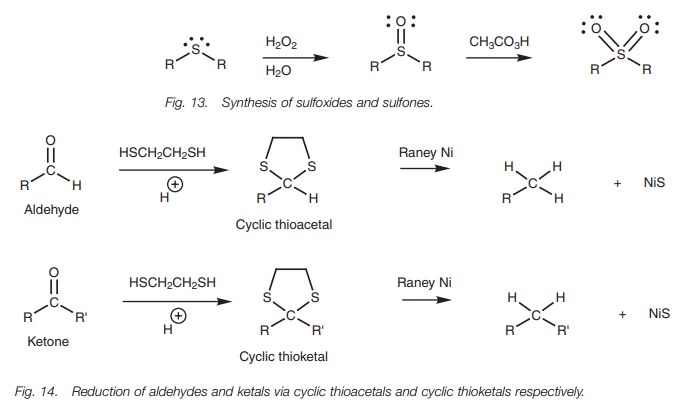 Thioethers can be reduced using Raney nickel – a catalyst which has hydrogen gas adsorbed onto the nickel surface (Fig. 14). This reaction is particularly useful for reducing thioacetals or thioketals since this provides a means of converting aldehydes or ketones to alkanes. The mechanism of the reduction reaction is radical based and is not fully understood.