Precipitation is the product of condensation of atmospheric water vapour that falls under gravity and reaches the surface of the earth.

Precipitation is the product of condensation of atmospheric water vapour that falls under gravity and reaches the surface of  the earth.

In order to fall as rain drop or snow, the tiny drop lets in a cloud must grow larger. The droplets accumulate over the nuclei and combine to grow large enough to fall and reach the surface of the earth due to gravity.

If the drop is smaller it falls slowly so that it evaporates before it reaches the ground. Ice crystals in cloud also cause precipitation. Each ice crystal grows by cooling so that they become large in size and fall to the ground. They melt on the way due to friction with the atmosphere and fall as rain. 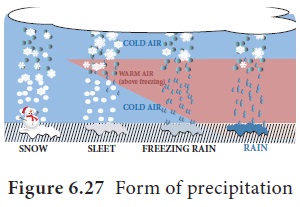 Hail: When precipitation occurs at sub zero temperature, the water droplets crystallise and fall as ice pellets with the size of 5 to 50 mm or some times more. This is called as ‘Hail’.

Sleet : Precipitation occurs as falling of raindrop along with ice pellets less than 5 mm diameter or snow, called as ‘Sleet’.

Snow: Precipitation occurs at below freezing point and falls as thin ice flakes or powdery ice, called as ‘Snow’.

Dew: Condensation of water droplets on the objects at the surface of the earth such as leaves and grasses are called as ‘Dew’.

People have always wanted to create rain, so that they would not suffer from drought. Modern science has been successful in causing rain in a limited way through cloud seeding. This method is based on the knowledge of growing ice crystals in clouds.

One method to cause rainfall from clouds is to introduce particles of dry ice (solid CO2) into the cloud from an air plane. The dry ice causes ice crystals to form in the cloud. These ice crystals coalesce, grow, melt and fall as rain. Cloud seeding will not be successful unless the cloud is already saturated with water vapour.

Precipitation can be classified based on the causes for the rising up of air,

Convectional Rainfall: As a result of heating of the surface air, the warm moist air expands and is forced to rise to a great height. As the air rises, it cools, reaches dew point and condenses to form clouds. This process influences the upper tropospheric circulation. By further cooling, precipitation takes place as rainfall. This rainfall occurs throughout the year near the equator in the afternoon. It is called as 4 ‘O’ clock rainfall region. In middle latitudes, convectional rainfall occurs in early summer in the continental interiors (Figure 6.29). 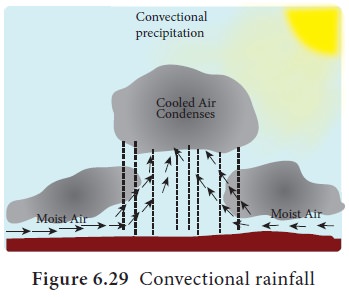 It occurs when large mass of air is forced to rise across land barriers, such as high mountain ranges, plateaus, escarpments, or over high hills. On the windward side of the region the warm moist air raises, temperature of the air falls below its dew point, forming clouds which give subsequent rainfall. As the wind moves to the leeward side it has emptied itself of moisture and thus descends the slope as warm dry winds. The leeward side of the mountain therefore is called as the rain shadow region (Figure 6.30). 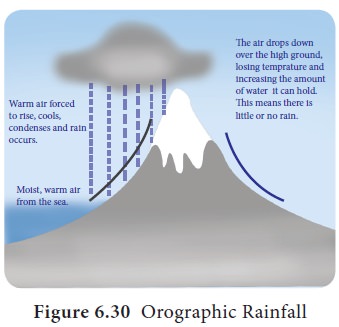 This type of precipitation is associated with a cyclonic activity (Tropical and Temperate) and also occurs along the frontal zone. Cyclonic rainfall is associated with Cumulo Nimbus (CuNi) clouds. The rainfall is very heavy and accompanied with lightning and thunder and high speed winds which has the potential to cause damage.

An isohyets or isohyetal line is a line joining points of equal  rainfall  on  a map in a given period. A map with isohyets is called an isohyetal map.

A ‘cloud burst’ is a sudden aggressive rainstorm falling in a short period of time limited to a small geographical area. Meteorologists say that the rain from a cloud burst is usually of the heavier rain with a fall rate equal to or greater than 100 mm (3.94 inches) per hour. Generally cloudbursts are associated with thunderstorms. The air currents rushing up words in a rain storm hold up a large amount of water. For example cloud bursts in the region of Uttarkhand (2013) and Chennai (2015).

Thunder is caused by rapid expansion of the air that is heated as the lightning passes through it.