They are, 1. Troposphere 2. Stratosphere 3. Mesosphere 4. Ionosphere( Thermosphere) and 5. Exosphere

The atmosphere is divided into five distinct layers (Figure.6.2) based on the temperature variations. They are,

All weather phenomena occur in this layer as it has dust particles and water vapour. This layer has clouds which produce precipitation on the earth. The Sun’s rays directly fall on the earth and then they are reflected back into the atmosphere. The temperature decreases in the troposphere with increase in altitude at the rate of 1  ° C for 165 metre or 6.5  ° C for every 1000 metres of ascent. This is known as lapse rate of temperature. This is the densest layer as it contains 70 to 80 percent of gases. The outer boundary of the troposphere is called tropopause, which is about 1.5 kilmeter thick.

It is the second layer of the atmosphere found above the troposphere. It approximately extends up to a height of 50 km from the earth’s surface. Temperature is constant up to a height of 20 km and increases gradually up to the stratopause where temperature is nearly -4° C. The lower part of this layer is highly concentrated with ozone gas which is called as ‘ozonosphere’. It prevents the ultra-violet rays from the Sun to enter into the lower part of the atmosphere as the rays are highly harmful it causes skin cancer and other ill effects to living organisms. But the ozone layer safeguards the life on the earth. 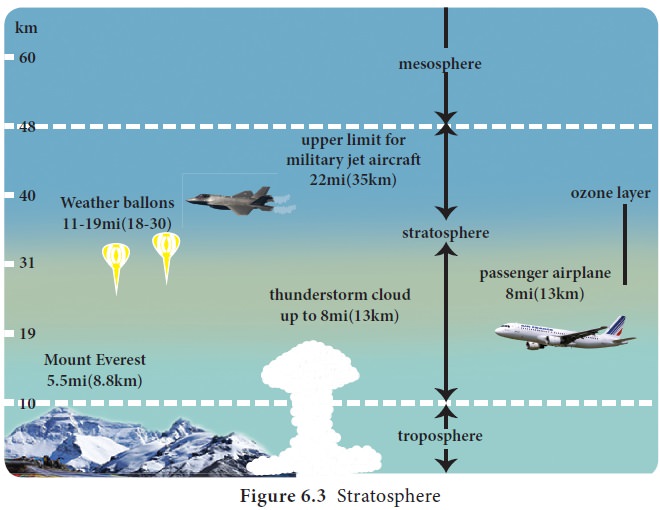 The mesosphere is the third layer of the atmosphere found approximately up to a height of 85 km above the surface of the earth. It is the coldest layer of the atmosphere. The temperature decreases with increase of altitude due to the absence of ozone. Its upper boundary is called mesopause where temperature reaches 2908C. Luminous noctilucent clouds form here due to the presence of cosmic dust. Meteors falling from the space get burned in this layer. It is because when meteors hit the air, the air gets compressed and heated up causing meteors to burn out.

The ionosphere is the fourth layer of the atmosphere extending approximately up to a height of 400 km. The temperature increases rapidly up to 1,0008C. It is due to the absorption of very short wave and high energy solar radiation by the atoms of hydrogen and oxygen gases. When light energy is transformed into heat energy, some gas molecules lose or gain electrons and become the charged particles called ions. The charged particles forming the lower part of the thermosphere as a zone, is called Ionosphere (Figure 6.4). These ionised particles create auroras at higher latitudes. Ionosphere can reflect radio waves back to the earth. This facilitates long distance wireless satellite communication. The credit of discovering ionosphere goes to Hennelly and Heaviside. 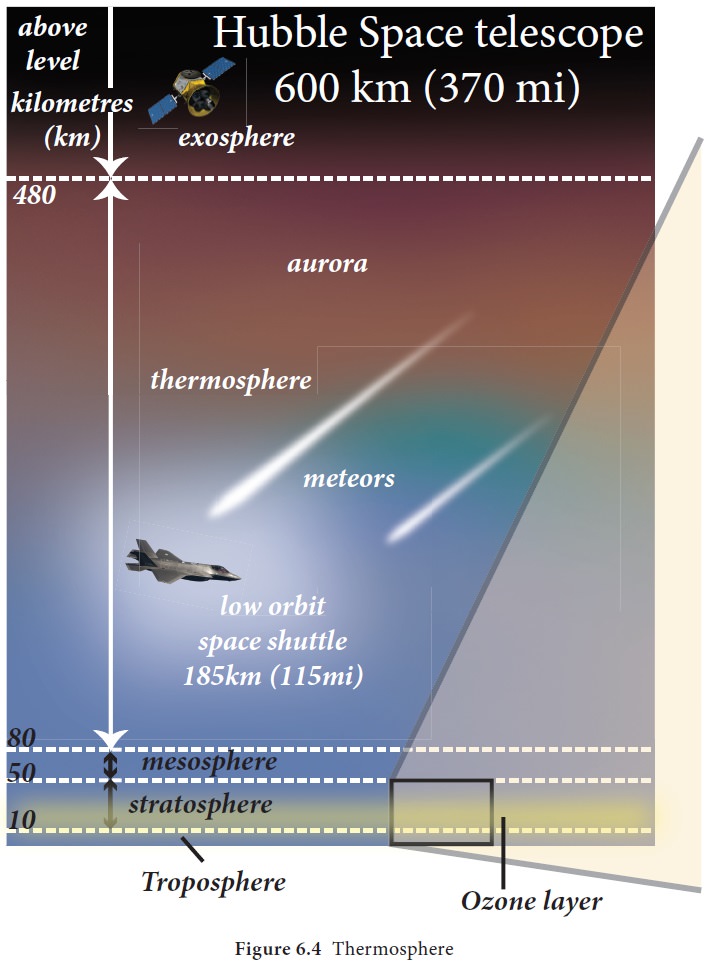 The upper most layer of the atmosphere which extends into the outer space from above 400 km up to 1600km. It has rarefied contents. It contains mainly oxygen and hydrogen atoms. These atoms can travel hundreds of kilometres without colliding with one another. Thus, the exosphere has no longer behaves like a gas. The temperature increases with increase of altitude and it ranges as high as 1650 ° C. The gravitational pull is minimal in this layer. This layer gradually merges with the space.