Humidity is the amount of water vapour in the atmosphere.

Humidity of the air can be expressed in the following ways.

a. Absolute Humidity: This measures the total amount of water vapour present in the air at particular time. It is highly variable based on the surface on which the air moves. It is measured as weight of humidity/ volume of the air.

Hygrometer is used to measure  the  relative humidity of a region.

Condensation is the change of the physical state of water vapour (gas state) into water (liquid state). The following process explains mechanism of condensation in the atmosphere. 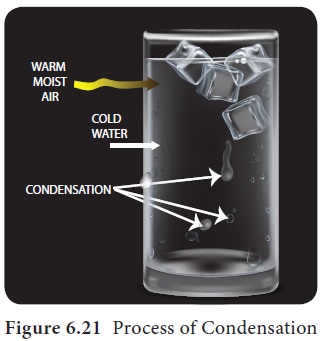 If an air reaches 100% relative humidity, it means that the air is completely filled with moisture content. It indicates that both the absolute humidity and the humidity capacity of the air are in same level. This condition is called ‘saturation of air’ which can be attained by reducing the temperature of the air or increasing the moisture content. The temperature at which the air gets saturated is called as ‘dew point’. The RH crosses the 100% when the temperature of the air drops below its dew point. This condition is called as ‘super saturation’ of the air. In this condition the air releases the excess moisture out of it in the form of tiny water droplets which floats and form clouds in the atmosphere.

If the same process occurs on the surface of the earth, it is called as ‘fog’ or cloud on the ground.

Clouds and its Types

Clouds are tiny water droplets suspended in the air formed due to the condensation. 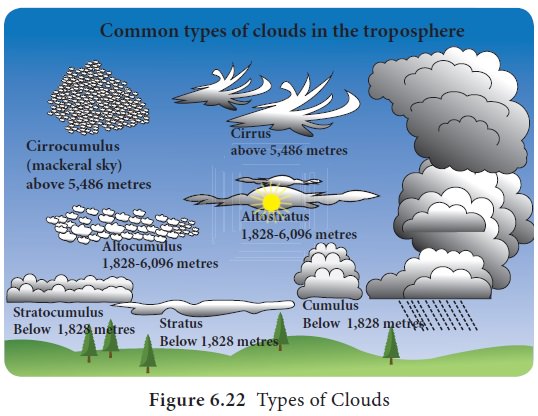 The clouds can be classified based on their form, height and appearance as follows: (Figure 6.22)

a. High clouds: Mainly cirrus (Ci) which are feathery form at 6 km above the ground.

i. Cirrus (Ci) – This looks fibrous and appears as wisps cotton in the blue sky. It indicates fair weather and gives brilliant sun set.

iii. Cirro Stratus (Cs) – This resembles a thin white sheet. The sky looks milky and the sun and moon shines through this clouds and form a ‘halo’.

b. Middle Clouds: Mainly Alto (Alt) clouds at 2 km to 6 km above the ground.

•            Altocumulus (Alt-Cu): These are woolly, bumpy clouds arranged in layers appearing like waves in the blue sky. They indicate fine weather.

Stratocumulus (St-Cu): This is rough and bumpy clouds with wavy structure.

•            Stratus (St): This is very low cloud, uniformly grey and thick, appears like highland fog. It brings dull weather and light drizzle. It reduces the visibility and is a hindrance to air transportation.

d. Clouds with vertical extent: These are mainly cumulus clouds whose heights extend from 2 km to 10 km approximately.

•          Cumulus (Cu): This is vertical cloud with rounded top and horizontal base, associated with convectional process in the tropical region. It also called as ‘fair weather cloud’.

•            Cumulonimbus (Cu-Ni): This is over grown cumulus cloud with great vertical extent, with black and white globular mass. The cauliflower top spreads like an anvil. This is formed due to heavy convection in the tropical regions. It is accompanied by lightning, thunder and heavy rainfall. 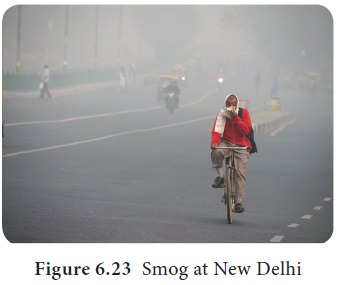 ‘Fog’ is defined as almost microscopic droplets of water condensed from super saturated air and suspended over or near the surface of the earth. Fogs reduce the visibility to less than 1 km. Fog occurs during calm or light wind conditions. It is more common in the areas near to the ocean due to the supply of more moisture by sea breeze. In the interior of the continents fog is formed due to reduction of temperature to extreme low during the winter nights.

If the fog has higher visibility due to lesser water drops near the surface it is termed as ‘mist’.

In large industrial areas the air is more polluted. If the fog forms in that area it mixes with the pollutants and turns into smog (smoke 1 fog 5 smog)  which is more hazardous to the health of the people. 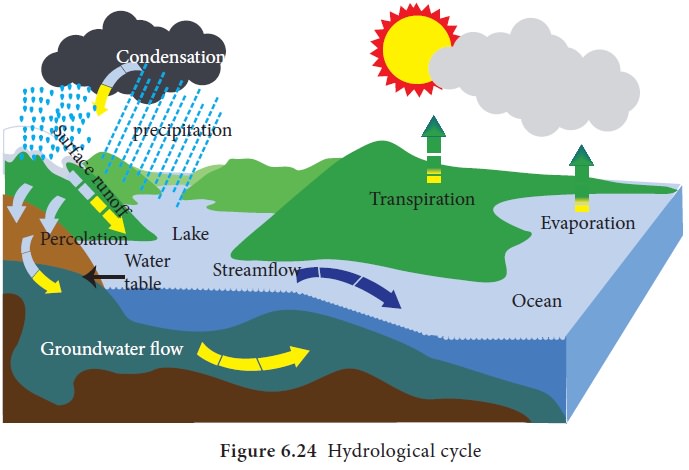 Evaporation is the process by which water in liquid state changes into vapour state using heat energy from Sun. Evaporation is maximum when the temperature is high, on the large expanse of water and when dry winds blow over water surface.

Condensation is the process by which water vapour cools to form water droplet by loosing temperature. The condensation occurs when dew point is reached in the atmosphere.

Precipitation is the process by which all forms of water particles fall from the atmosphere and reach the ground.

The rain drop that falls may get evaporated  before  it reaches the ground in an extremely arid region.

The cup filled with ice cubes has tiny water droplets on its outer surface (Figure 6.21). Identify why.

The moisture in the atmosphere is based on the following processes:

Transpiration – Water state changes from liquid in to (gas) vapour state due to the activity of plants.

Evapotranspiration – This denotes that the total amount of (liquid) water state changed in to (gas) vapour state due to evaporation and the activity of plants transpiration.

Isonephs – The imaginary line connecting the places having equal amount of cloudiness.