Ozone (O3) is form of oxygen that combines three atoms into each molecule.

Ozone (O3) is form of oxygen that combines three atoms into each molecule. It absorbs and filters the harmful ultraviolet B radiation coming from the sun. This way the ozone layer protects all life on earth. However, ozone is harmful when it develops near the ground. It causes health problems like asthma and other respiratory illness. 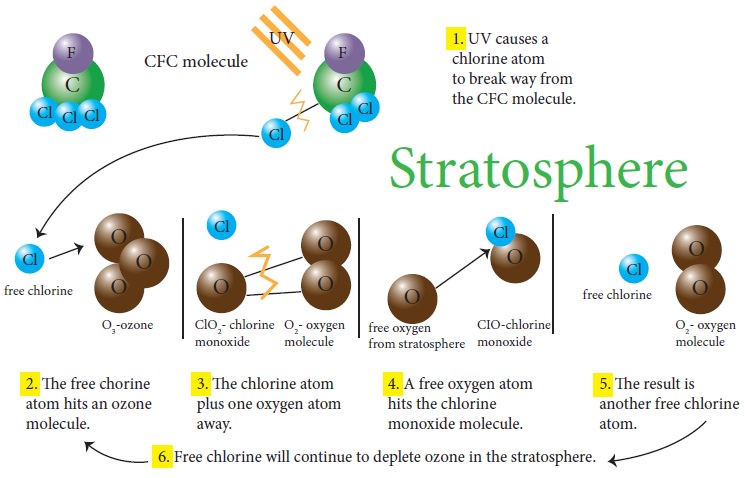 Ozone Depletion: A steady decline in the concentration of ozone in the earth’s stratosphere (the ozone layer) is called ozone depletion.

Ozone depletion occurs when chloro fluoro carbon (CFC) and halon gases, formerly  found  in  aerosol  spray  cans and  refrigerants  are  released  into  the atmosphere and they cause chemical reactions that break down ozone molecules and reduce the concentration of them. Nitrogen oxide released by emitted by supersonic aircrafts can also destroy the ozone molecules to break down. Ozone-depleting substances are present throughout the stratospheric ozone layer because they are transported great distances by atmospheric air motions. The severe depletion of the Antarctic ozone layer known as the “ozone hole” occurs because of the special atmospheric and chemical conditions that exist there and nowhere else on the globe. The very low winter temperatures in the Antarctic stratosphere cause polar stratospheric clouds (PSCs) to form. Special reactions that occur on PSCs, combined with the relative isolation of polar stratospheric air, allow chlorine and bromine reactions to produce the ozone hole in Antarctic springtime.

Satellite images of the earth over last decades observed that the atmospheric ozone layer is getting thinner. On October 2, 2015, the ozone hole was recorded to its maximum size of 28.2 million sq.km over Antarctica (Figure 6.5). The size of the ozone hole is larger than the size of continent of North America. The ozone holes over Antarctica allow the ultraviolet radiation to enter and cause global warming, skin cancer, eye cataract and even blindness. 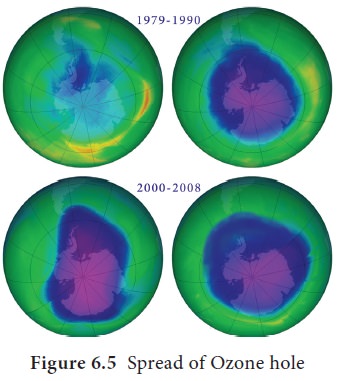 Depletion of the ozone layer has consequences on human, animal, plants and micro organisms. This typically results from higher UV levels reaching us on earth. Research confirms that high levels of UV rays cause non-melanoma skin cancer.

To protect the ozone layer for our future generation, avoid using products which are emitting pollutants such as aerosol sprays, blowing agents for foams and packing materials, as solvents and as refrigerants.