The antibody cross-links antigen molecules in variable proportions, and aggregates (precipitates) form. In the zone of equivalence, optimal proportions of antigen and antibody combine;

Procedures involving soluble antigens have been used to study the antigenic composition of fish pathogens (bacterial, viral and parasite) and to a lesser extent a diagnostic tools.Precipitin reactions can be done in semisolid medium (agar):

Using this method, it is possible to quantitate the concentration of anti body and antigen in a solution. The antigen diffuses in a radial direction out from the well and a precipitin ring develops when the reactants are close to their optimal proportions (Figure 10-2). At the equivalence point, when the ring is stationary, the square of the diameter or area of the ring is directly proportional to antigen concentration. Conversely, though less sen-sitive, antigen can be mixed into the agar and the amount of antibody in a sample can be determined. Consequently, it is possible to calibrate the plate using a pre-determined constant amount of antibody (or antigen) in the agar and placing known concentrations of antigen (or antibody), or sample dilutions in the wells. By calibrating the method, such radial immu-nodiffusion is used to measure IgG, IgM, complement components, and other substances in the serum. 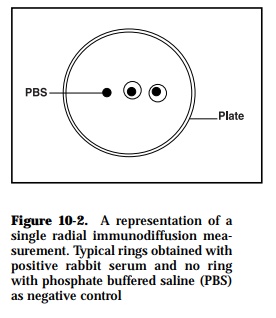 In some cases, poor resolution occurs with complex antigenic mixtures al-though the method is relatively sensitive when soluble antigens are em-ployed. Furthermore, the length of time for visualization of results depends on antigenic type and/or molecular mass. This technique is best used with low molecular weight antigens and is unaffected by molecular charge. With high molecular weight antigens, the diffusion time is longer for formation of the precipitin ring maximum diameter. The use of tannic acid as a precip-itin intensifying agent increases the plate sensitivity and allows detection of lower antigen levels in serum. The method offers a limited benefit and is insensitive for diagnostic purposes. It requires higher antigen concentra-tions in the test mixture since low amounts may result in lack of precipita-tion of the samples used.

The method has been used infrequently in fish immunological studies and then only for estimation of the immunoglobulin concentrations in both nor-mal and immune serum. The concentration of immunoglobulins produced in response to injection with Salmonella bacterial and/or red blood cell (RBC) antigens have been measured in catfish (Ourth, 1986). Serum IgM levels have been measured in rainbow trout naturally infected with VHS virus and ERM bacteria (Olesen and Jorgensen, 1986).

In the gel diffusion technique, gels, usually clarified agar are used as matri-ces for combining diffusion with precipitation. Antigen and antibody are placed in different wells in agar and allowed to diffuse towards each other (passive diffusion) and precipitation results where the optimal antibody/ antigen ratios have been reached (Figure 10-3). This method (Ouchterlony) can be used either to detect the number of major components in an anti-genic mixture or identify the presence of homologous and heterologous molecules in an antigenic extract based on the specific recognition capacity of a prepared antiserum. 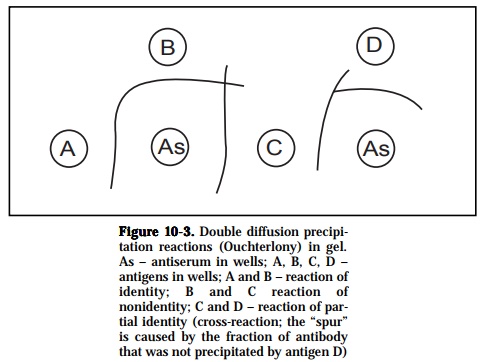 If two different samples contain identical or related antigen epitopes, the precipitin lines are confluent and meet to give a single arc, thus a denoting a reaction of identity. If antigens in the two samples are dissimilar or unre-lated and possess no common epitopes then the precipitin lines are inde-pendent of each other and cross over, indicating a reaction of non-identity. When the antigen samples contain two molecular species, a reaction of identity occurs when epitopes are similar to both of the molecular types but an additional epitope on one of the antigen species would give rise to a line of non-identity such that a spur is formed. This is also referred to as a reaction of partial identity since the antisera would detect the unique com-ponent on one but not the other antigen of similarity. Lastly, if the two molecular species have one epitope in common and each has an epitope(s) not present in the other, partial identity occurs and two spurs are formed.

The method has been employed frequently to determine the serological re-lationships between fish bacterial strains on the basis of lipopolysaccharide types, between Vibriobacteria isolated from other marine teleosts (Johnsen, 1977), in the identification of extracellular Vibrio toxins patho-genic to eels and ayu (Kanemori et al., 1987) and for comparison of antige-nicity of Edwardsiella tarda after injection into ells (Salati and Kusuda, 1985). It was also used to diagnose BKD (Kimura et al., 1978) and to deter-mine the serological differences of Photobacterium damsela subsp. piscicida isolates (Kawahara et al., 1998). 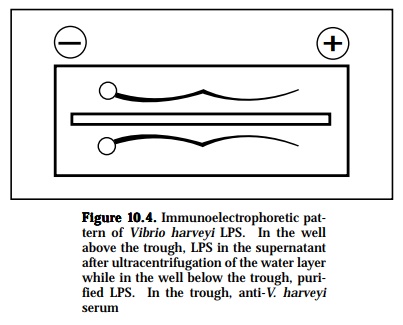 to different electrophoretic mobilities caused by charges on the molecules. After the antigen has been separated into its components, antiserum will be put into a channel cut parallel to the direction of the electrophoresis. From this channel, the antibodies will diffuse torwards the electrophoretically separated antigen components, and vice versa. As the antigen and anti-body diffuse toward each other, they form a series of arcs of precipitate (Figure 10-4). This permits the serum proteins to be characterized in terms of their presence, absence, or unusual pattern. The separated components are then visualized on the plate by precipitin band formation due to the diffusion of a specific antiseruminto the agar parallel to the current direc-tion. With this method, the antigenic complexities of various sera can be determined, detect the purity of one component system or isolated frac-tions, detect and to determine the number of components in a multicompo-nent system and to demonstrate antibody heterogeneity.

The test was used to identify IPN virus in cell culture (Dea and Elazhary, 1983) and determine the serological characteristics of atypical strains of Edwardsiella tardaisolated from sea breams (Costa et al., 1998).