·           Photo diode operates in to a low impedance amplifier bias or load resistor “Rb” is used to match the amplifier impedance. 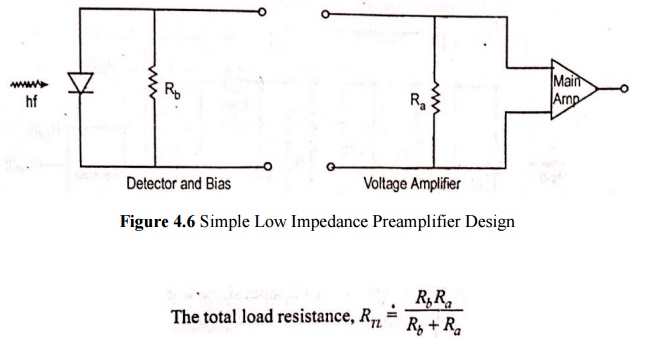 ·           Low impedance preamplifier can operate over a wide bandwidth but they have poor receiver sensitivity.

·           They are used in special short distance application where high sensitivity is not a major concern. 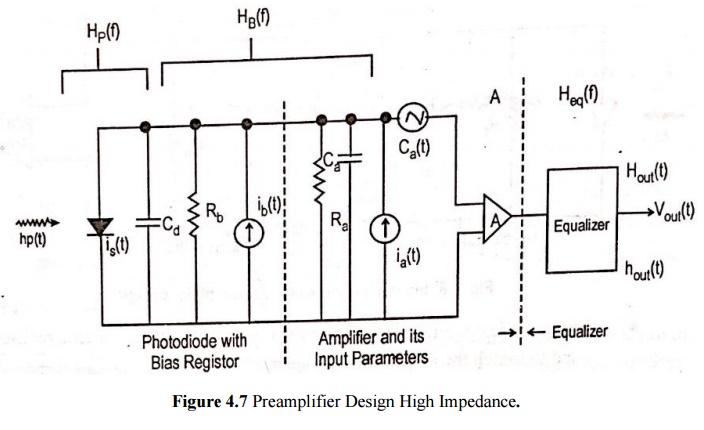 ·           The second configuration consists of a high input impedance amplifier together with a large detector bias resistor (Ra) in order to reduce the effect of thermal noise.

·           In high impedance preamplifier, the goal is to reduce all sources of noise to the absolute minimum. This can be achieved by reducing input capacitance through the selection of low capacitance high frequency devices.

·           The high impedance procedure a large input RC time constant, the front end bandwidth is less than signal bandwidth. Thus, the input signal is integrated and equalization techniques must be employed to compensate for this. 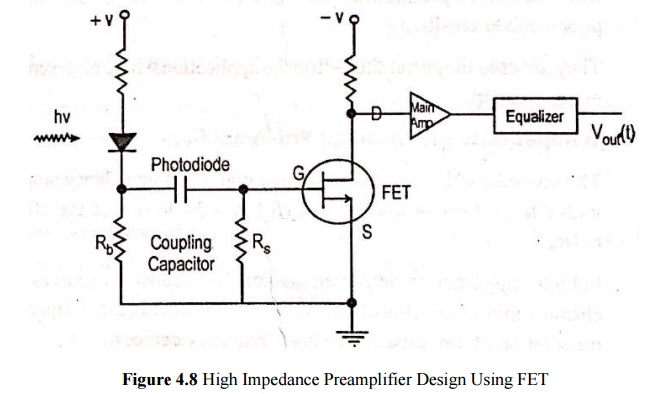 Basic Noise Sources in the Circuit are:

·           This (1/f noise) was not include in the above analyses beceause it contributes to the overall noise only at very low bit rates.

·           As he amplifier input resistance is very high, the input current noise spectral density S1 is

Where Igate is the channel noise factor.

·           The thermal noise of the conducting channel resistance is characterized by the transconductance gm.

·           Ѓ  is a numerical that accounts for thermal noise and gate included noise plus the correlation between these two noises. ·           The 1/f noise corner frequency fc is defined as the frequency at which 1/f noise, which dominates the FET noise at low frequencies and has 1/fpower spectrum, becomes equal frequency channel noise described by Ѓ.

·           To minimize the noise in a high impedance design, the bias resistor  shoud be very large. The effect of this is the detector output signal is integrated by the amplifier input resistance. 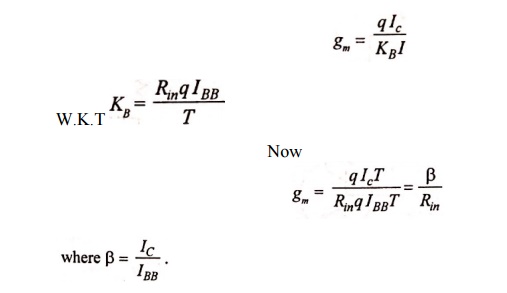 Where kb is the boltzmann’s constant.

(1)  For broadband applications, equalization is required.

(2)  It has limited dynamic range.

·           The thermal noise characteristic ‘WTZ’ at equalizer output can be found by replacing Rb and Rb’. 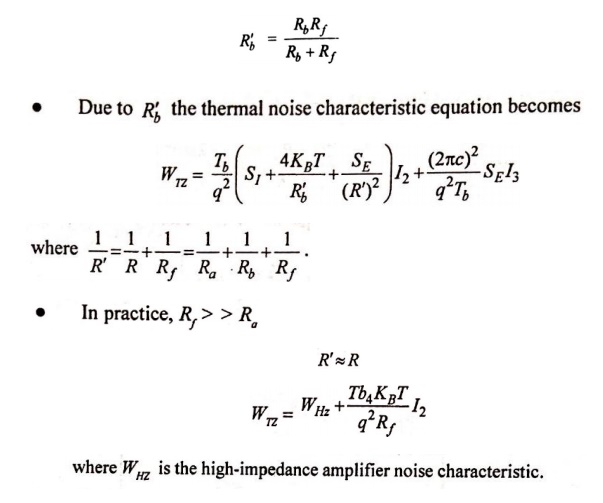 ·           The transfer function of non-feedback amplifier is given by

(2)  Little or no equalization is required.

(4)  It is very easily controllable and stable.