The efficiency of an amplifier is the ratio of ac output power to dc input power, written as a percentage. By formula:

The lower the position of the Q-point on the dc load line, the higher the maximum theoretical efficiency of a given amplifier. Typical Q-point locations for class A, B, AB, and C amplifiers are shown in Figure 11.1 of the text.

These equations are developed as illustrated in Figure 11.1. 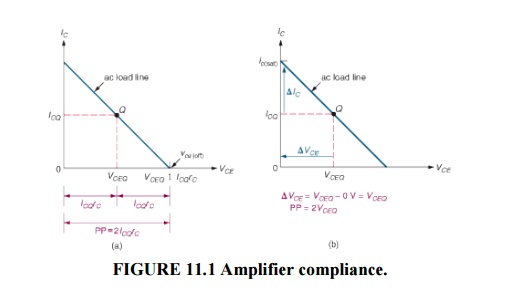 The compliance of an amplifier is determined by solving both PP equations and using the lower of the two results, as demonstrated in Example 11.1 of the text. Note the following:

A transformer-coupled class A amplifier is shown in Figure 11.2. The transformer is used to couple the amplifier output signal to its load. 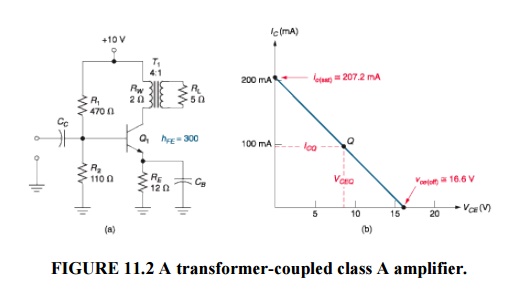 The dc biasing of the transformer-coupled class A amplifier is similar to that of other amplifiers, outside of the fact that the value of VCEQ is designed to be as close as possible to the value of VCC.

The maximum theoretical efficiency of a transformer-coupled class A amplifier is 50%.

In practice, the transformer-coupled amplifier has a value of < 25%. The high theoretical value is a result of assuming that VCEQ = VCC and ignoring transformer (and other) circuit losses. The efficiency of a transformer-coupled circuit is calculated as shown in Example 11.7 of the text.

The transformer-coupled class A amplifier has the following advantages over the RC-coupled circuit:

·                    A transformer-coupled circuit can easily be converted to a tuned amplifier; that is, a circuit that provides a specific value of gain over a specified range of operating frequencies.

where ICO is the collector cutoff current rating for the transistor. 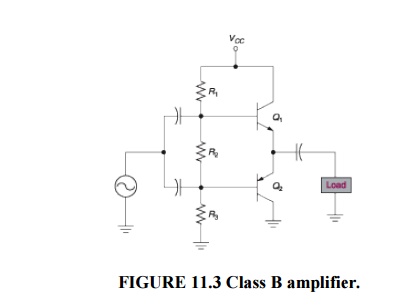 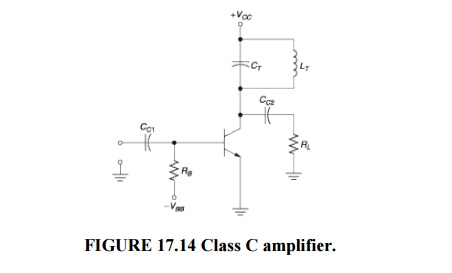 The most important aspect of the dc operation of this amplifier is that it is biased deeply into cutoff, meaning that VCEQ =~~=VCC and ICQ =~~= 0 A. If a negative supply is used to bias the base circuit, the value of VBB usually fulfills the following relationship:

The ac operation of the class C amplifier is based on the characteristics of the parallel-resonant tank circuit. If a single current pulse is applied to the tank circuit, the result is a decaying sinusoidal waveform (as shown in Figure 17.43b of the text). The waveform shown is a result of the charge/discharge cycle of the capacitor and inductor in the tank circuit, and is commonly referred to as the flywheel effect.

To produce a sine wave that does not decay, we must repeatedly apply a current pulse during each full cycle. At the peak of each positive alternation of the input signal, the tank circuit in a class C amplifier gets the current pulse it needs to produce a complete sine wave at the output. This concept is illustrated in Figure 17.44 of the text. Note that T1, T2, and T3 are inverted at the output relative to the input. This is due to the fact that a common-emitter amplifier produces a 180° voltage phase shift. Note that the bandwidth, Q, and QL characteristics of a class C amplifier are the same as those for any tuned discrete amplifier.