In tuned RF amplifiers, transistor are used at the frequencies nearer to their unity gain bandwidths (i.e. fT), to amplify a narrow band of high frequencies centred around a ratio frequency.

In tuned RF amplifiers, transistor are used at the frequencies nearer to their unity gain bandwidths (i.e. fT), to amplify a narrow band of high frequencies centred around a ratio frequency. At this frequency, the inter junction capacitance between base and collector, Cbc of the transistor becomes dominant, i.e., its reactance between low enough to be considered, which is otherwise infinite to be neglected as open circuit. Being CE configuration capacitance Cbe, shown in the ig. 3.35 come across input and output circuits of an amplifier. As reactance of Cbc at RF is low enough it provide the feedback path from collector to base. With this circuit condition, if some feedback signal manages to reach the input from output in a positive manner with proper phase shift, then there is possibility of circuit converted to a positive manner with proper phase shift, then there is possibility of circuit converted to an unstable one, generating its own oscillations and can stop working as an amplifier. This circuit will always oscillate if enough energy is fed back from the collector to the base in the correct phase to overcome circuit losses. Unfortunately, the conditions for best gain and selectivity are also those which promote oscillation. In order to prevent oscillations in tuned RF amplifiers it was necessary to reduce the stage gain to a level that ensured circuit stability. This could be accomplished in several ways such as lowering the Q of tune circuits; stager tuning, losse coupling

between the stages or inserting a ‘loser’ element into the circuit. While all these methods reduced gain, detuning and Q reduction had detrimental effects on selectivity. Instead of loosing the circuit performance to achieve stability, the professor L.A. Hazeltine introduced a circuit in which the troublesome effect o the collector to base capacitance of the transistor was neutralized by introducing a signal which cancels the signal coupled through the collector to base capacitance. He proved that the neutralization can be achieved by deliberately feeding back a portion of the output signal to the input in such a way that it has the same amplitude as the unwanted feedback but the opposite phase. Later on many neutralizing circuits were introduced. Let us study some of these circuits.

The ig. 3.36 shows one variation of the Hazeline circuit. In this circuit a small value of variable capacitance CN  is connected from the bottom of coil, point B, to the base. Therefore, the  internal capacitance Cbc, shown dotted, feeds a signal from the top end of the coil, point A, to the transistor base and the CN feeds a signal o equal magnitude but opposite polarity rom the bottom o coil, point B, to the base. The neutralizing capacitor, CN can be adjusted correctly to completely nulliy the signal ed through the Cbc. 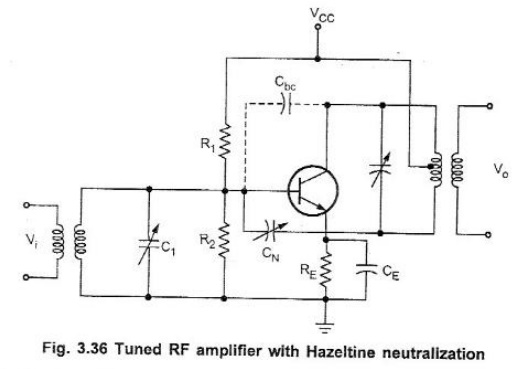 The Fig. 3.38 shows the neutralization o RF amplifier using coil. In this circuit, L part of the tuned circuit at the base o next stage is oriented or minimum coupling to the other winding. It is wound on a separate from and is mounted at right angle to the coupled windings. If the windings are properly polarized, the voltage across L due to the circulating current in the base circuit will have the proper phase to cancel the signal coupled through the base to collector, Cbc capacitance. 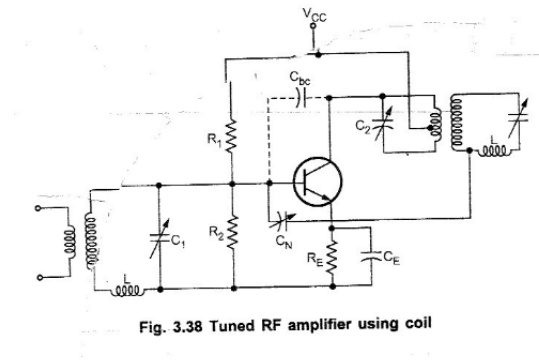