In practice, we need amplifier which can amplify a signal from a very weak source such as a microphone, to a level which is suitable for the operation of another transducer such as loudspeaker . This is achieved by cascading number of amplifier stages, known as multistage amplifier

In practice, we need amplifier which can amplify a signal from a very weak source such as a microphone, to a level which is suitable for the operation of another transducer such as loudspeaker . This is achieved by cascading number of amplifier stages, known as multistage amplifier

For faithful amplification amplifier should have desired voltage gain, current gain and it should match its input impedance with the source and output impedance with the load. Many times these primary requirements of the amplifier can not be achieved with single stage amplifier, because of the limitation of the transistor/FET parameters. In such situations more than one amplifier stages are cascaded such that input and output stages provide impedance matching requirements with some amplification and remaining middle stages provide most of the amplification.

We can say that,

·                    When the input or output impedance is not of the correct magnitude, for a particular application two or more amplifier stages are connected, in cascade. Such amplifier,with two or more stages is also known as multistage amplifier.

Vi1 is the input of the first stage and Vo2 is the output of second stage.

So,Vo2/Vi1 is the overall voltage gain of two stage amplifier. 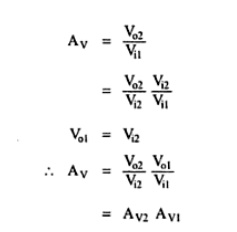 The resultant voltage gain of the multistage amplifier is the product of voltage gains of the various stages.

In many situations it is found very convenient to compare two powers on logarithmic scale rather than on a linear scale. The unit of this logarithmic scale is called decibel (abbreviated dB). The number N decibels by which a power P2 exceeds the power P1 is defined by

Both can be given as

Where Ri and Ro are the input and output impedances of the amplifier respectively. Then,

If the input and output impedances of the amplifier are equal i.e. Ri = Ro= R, then

Gain of Multistage Amplifier in dB

The gain of a multistage amplifier can be easily calculated if the gain of the individual stages are known in dB, as shown below

Thus, the overall voltage gain in dB of a multistage amplifier is the decibel voltage gains of the individual stages. It can be given as

2. Advantages of Representation of Gain in Decibels

Logarithmic scale is preferred over linear scale to represent voltage and power gains because of the following reasons :

·                    Many times output of the amplifier is fed to loudspeakers to produce sound which is received by the human ear. It is important to note that the ear responds to the sound intensities on a proportional or logarithmic scale rather than linear scale. Thus use of dB unit is more appropriate for representation of amplifier gains.

In multistage amplifier, the output signal of preceding stage is to be coupled to the input circuit of succeeding stage. For this interstage coupling, different types of coupling elements can be employed. These are :

Figure shows RC coupled amplifier using transistors. The output signal of first stage is coupled to the input of the next stage through coupling capacitor and resistive load at the output terminal of first stage 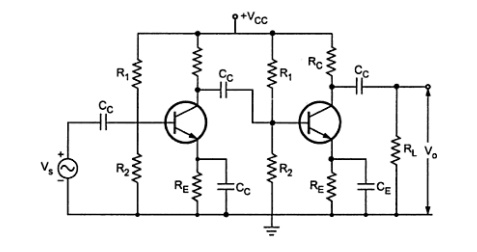 The coupling does not affect the quiescent point of the next stage since the coupling capacitor Cc blocks the d.c. voltage of the first stage from reaching the base of the second stage. The RC network is broadband in nature. Therefore, it gives a wideband frequency response without peak at any frequency and hence used to cover a complete A.F amplifier bands. However its frequency response drops off at very low frequencies due to coupling capacitors and also at high frequencies due to shunt capacitors such as stray capacitance.

Figure shows transformer coupled amplifier using transistors. The output signal of first stage is coupled to the input of the next stage through an impedance matching transformer 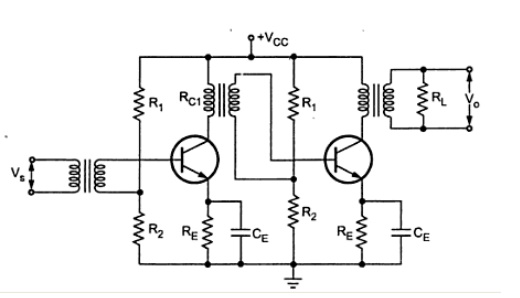 This type of coupling is used to match the impedance between output an input cascaded stage. Usually, it is used to match the larger output resistance of AF power amplifier to a low impedance load like loudspeaker. As we know, transformer blocks d.c, providing d.c. isolation between the two stages. Therefore, transformer coupling does not affect the quiescent point of the next stage.

Frequency response of transformer coupled amplifier is poor in comparison with that an RC coupled amplifier. Its leakage inductance and inter winding capacitances does not allow amplifier to amplify the signals of different frequencies equally well. Inter winding capacitance of the transformer coupled may give rise resonance at certain frequency which makes amplifier to give very high gain at that frequency. By putting shunting capacitors across each winding of the transformer, we can get resonance at any desired RF frequency. Such amplifiers are called tuned voltage amplifiers. These provide high gain at the desired of frequency, i.e. they amplify selective frequencies. For this reason, the transformer-coupled amplifiers are used in radio and TV receivers for amplifying RF signals. As d.c. resistance of the transformer winding is very low, almost all d.c. voltage applied by Vcc is available at the collector. Due to the absence of collector resistance it eliminates unnecessary power loss in the resistor. 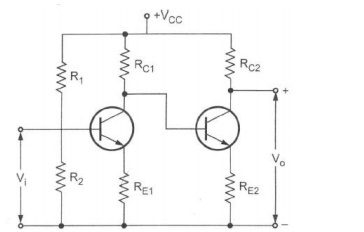 Due to absence of RC components, frequency response is good but at higher frequencies shunting capacitors such as stray capacitances reduce gain of the amplifier.

The transistor parameters such as VBE and β change with temperature causing the collector current and voltage to change. Because of direct coupling these changes appear at the base of next stage, and hence in the output. Such an unwanted change in the output is called drift and it is serious problem in the direct coupled amplifiers.