Can you imagine a world without human beings? Humanbeings are important to develop the economy and society. The Latin word 'populus' means 'people'. Population is the total number of people living together in a particular place at the given point of time.

Can you imagine a world without human beings? Humanbeings are important to develop the economy and society. The Latin word 'populus' means 'people'. Population is the total number of people living together in a particular place at the given point of time.

‘It is easy to add but difficult to maintain’ Population is a dynamic phenomenon where the number, distribution and composition are constantly changing. Human population increases as babies are born and decreases as people die. For most of human history, births have only slightly exceeded deaths every year. As a result, human population grow slowly. About the time of Industrial Revolution, it began to increase rapidly.

Natural increase of population is the difference between the birth rate and death rate. In fact population is always increasing but only in very rare cases it may decrease through natural or man-made disasters such as famine, landslides, earthquakes, tsunami, epidemics, extreme weather conditions and war.

Population change refers to an increase or decrease in the population of an area influenced by the number of births, deaths and migration. The population of the world doubled from 500 million in 1650 to 1000 million in1850.The projected population for 2025 and 2050 is about 8 billion and 9 billion respectively.

Population growth refers to an increase in the number of people who reside in a particular area during a particular period.

The important features associated with the population studies in Tamil Nadu are as follows: 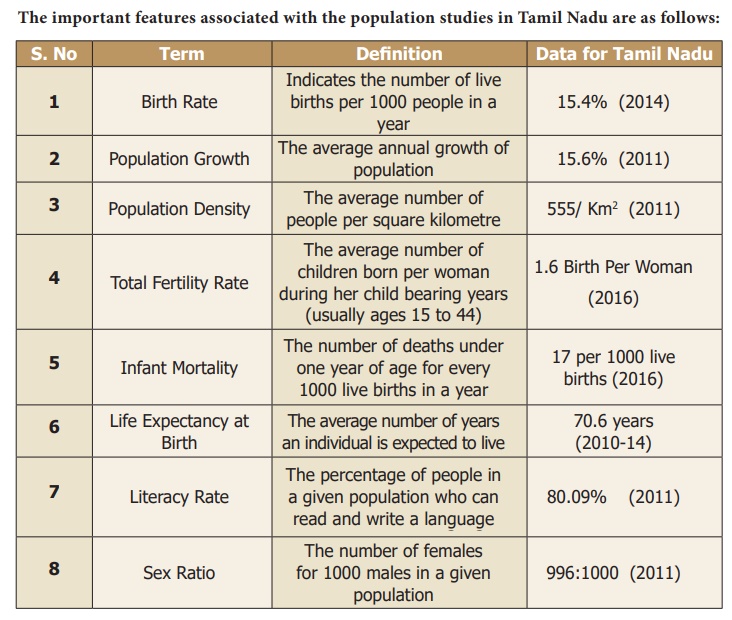 Population distribution refers to the way in which people are spread out across the earth’s surface.

The world population is not uniformly distributed, owing to the following factors.

The world’s population density is divided into three main groups. 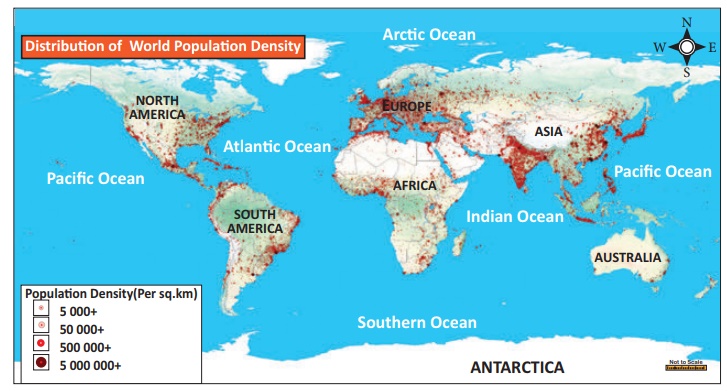 Activity: The population data of the five most densely populated districts of Tamil Nadu is given below. (Findout the population density and their rank)

Migration is defined as the permanent or semi-permanent change  of  home  of  an individual or a group of people over a significant distance from their place of origin.

There are two types of migration:

The movement of people within a country i.e. between states, districts, villages, etc is called as Internal migration.

The movement of people from one country to another, across international borders is called as International migration.

Push and pull factors of migration 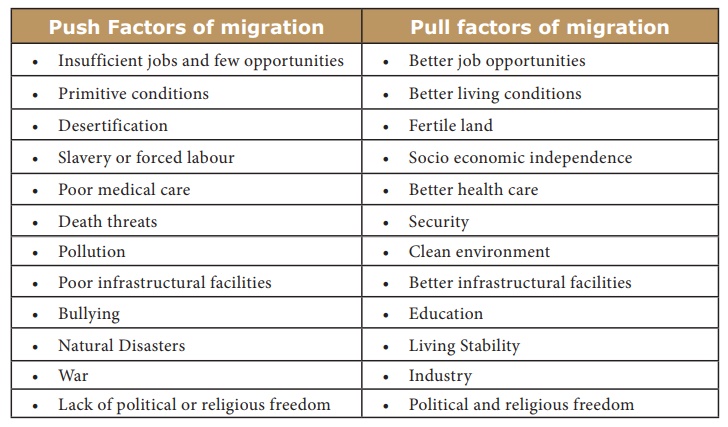 Emigration means moving out or to leave a place.

Immigration means to enter or come into a new country for the purpose of settling there.