Cylindrical optical fibers do not generally maintain the polarization state of the light input for more than a few meters, and hence for many applications involving optical fiber transmission some form of intensity modulation of the optical source is utilized. The optical signal is thus detected by a photodiode which is insensitive to optical polarization or phase of the lightwave within the fiber. Nevertheless, systems and applications have been investigated which could require the polarization states of the input light to be maintained over significant distances, and fibers have been designed for this purpose. These fibers are single mode and the maintenance of the polarization state is described in terms of a phenomenon known as fiber birefringence.

Single-mode fibers with nominal circular symmetry about the core axis allow the propagation of two nearly degenerate modes with orthogonal polarizations. They are therefore bimodal supporting HEx11 and HEy11 modes where the principal axes x and y are determined by the symmetry elements of the fiber cross section. Hence in an optical fiber with an ideal optically circularly symmetric core both polarization modes propagate with identical velocities.

Manufactured optical fibers, however, exhibit some birefringence resulting from differences in the core geometry (i.e. ellipticity) resulting from variations in the internal and external stresses, and fiber bending. The fiber therefore behaves as a birefringent medium due to the difference in the effective refractive indices, and hence phase velocities, for these two orthogonally polarized modes. The modes therefore have different propagation constants bx and by which are dictated by the anisotropy of the fiber cross section. In this case bx and by are the propagation constants for the slow mode and the fast mode respectively. When the fiber cross-section is independent of the fiber length L in the z direction, then the modal birefringenceBF for the fiber is given by:

Where l is the optical wavelength. Light polarized along one of the principal axes will retain its polarization for all L. The difference in phase velocities causes the fiber to exhibit a linear retardation F(z) which depends on the fiber length L in the z direction and is given by:

It may be shown that birefringent coherence is maintained over a length of fiber Lbc (i.e. coherence length) when:

wherec is the velocity of light in a vacuum and dl is the source linewidth. 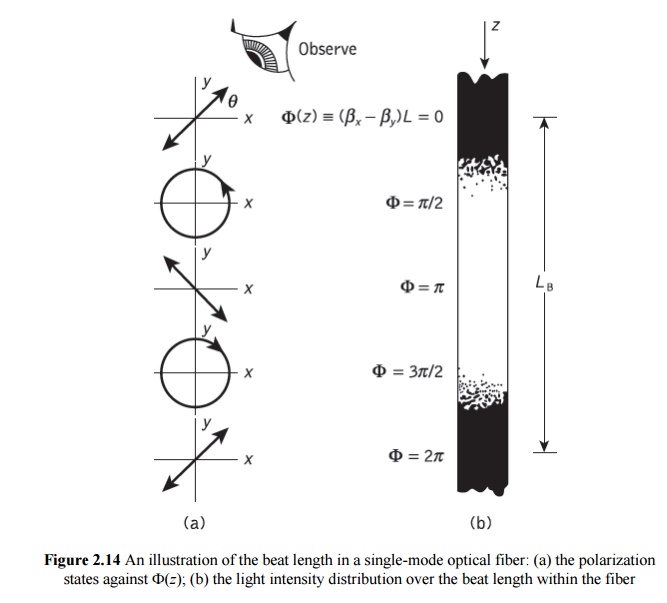 Typical single-mode fibers are found to have beat lengths of a few centimeters, and the effect may be observed directly within a fiber via Rayleigh scattering with use of a suitable visible source (e.g. He–Ne laser). It appears as a series of bright and dark bands with a period corresponding to the beat length, as shown in Figure 2.14.(b).

The modal birefringence BF may be determined from these observations of beat length. In a nonperfect fiber various perturbations along the fiber length such as strain or variations in the fiber geometry and composition lead to coupling of energy from one polarization to the other. These perturbations are difficult to eradicate as they may easily occur in the fiber manufacture and cabling. The energy transfer is at a maximum when the perturbations have a period L, corresponding to the beat length, and defined by:

However, the cross-polarizing effect may be minimized when the period of the perturbations is less than a cutoff period Lc (around 1 mm). Hence polarization-maintaining fibers may be designed by either:

(a)  high (large) birefringence: the maximization of the fiber birefringence, may be achieved by reducing the beat length LB to around 1 mm or less; or

(b) low (small) birefringence: the minimization of the polarization coupling perturbations with a period of L. This may be achieved by increasing Lc giving a large beat length of around 50 m or more.

Although the polarization state of the light arriving at a conventional photodetector is not distinguished and hence of little concern, it is of considerable importance in coherent lightwave systems in which the incident signal is superimposed on the field of a local oscillator (see Section 13.3). Moreover, interference and delay differences between the orthogonally polarized modes in birefringent fibers may cause polarization modal noise and PMD respectively (see Section 3.13.2). Finally, polarization is also of concern when a single-mode fiber is coupled to a modulator or other waveguide device (see Section 11.4.2) that can require the light to be linearly polarized for efficient operation. Hence, there are several reasons why it may be desirable to use fibers that will permit light to pass through while retaining its state of polarization. Such polarization-maintaining (PM) fibers

The birefringence of conventional single-mode fibers is in the range BF = 10-6 to 10-5. An HB fiber requires BF > 10-5 and a value better than 10-4 is a minimum for polarization maintenance. HB fibers can be separated into two types which are generally referred to as two-polarization fibers and single-polarization fibers. In the latter case, in order to allow only one polarization mode to propagate through the fiber, a cutoff condition is imposed on the other mode by utilizing the difference in bending loss between the two polarization modes. 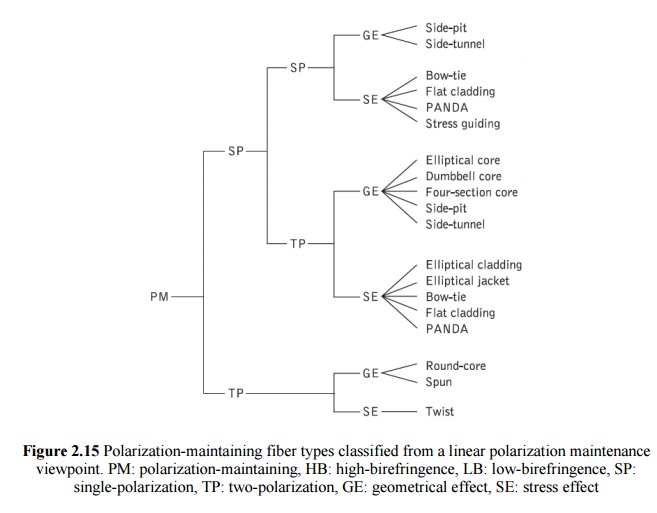 The various types of PM fiber, classified in terms of their linear polarization maintenance, are shown in Figure 2.16