Material absorption is a loss mechanism related to the material composition and the fabrication process for the fiber, which results in the dissipation of some of the transmitted optical power as heat in the waveguide. The absorption of the light may be intrinsic (caused by the interaction with one or more of the major components of the glass) or extrinsic (caused by impurities within the glass). 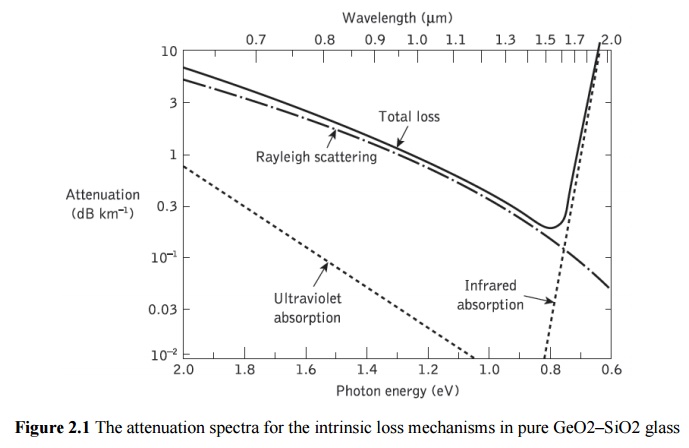 It may be observed that there is a fundamental absorption edge, the peaks of which are centered in the ultraviolet wavelength region. This is due to the stimulation of electron transitions within the glass by higher energy excitations.

The tail of this peak may extend into the window region at the shorter wavelengths, as illustrated in Figure 2.1. Also in the infrared and far infrared, normally at wavelengths above 7 µm, fundamentals of absorption bands from the interaction of photons with molecular vibrations within the glass occur.

These give absorption peaks which again extend into the window region. The strong absorption bands occur due to oscillations of structural units such as Si–O (9.2 µm), P–O (8.1 µm), B–O (7.2 µm) and Ge–O (11.0µm) within the glass. Hence, above 1.5 µm the tails of these largely far-infrared absorption peaks tend to cause most of the pure glass losses.

However, the effects of both these processes may be minimized by suitable choice of both core and cladding compositions. For instance, in some non oxide glasses such as fluorides and chlorides, the infrared absorption peaks occur at much longer wavelengths which are well into the far infrared (up to 50 µm), giving less attenuation to longer wavelength transmission compared with oxide glasses.

Some of the more common metallic impurities found in glasses are shown in the Table 2.1, together with the absorption losses caused by one part in 109

It may be noted that certain of these impurities, namely chromium and copper, in their worst valence state can cause attenuation in excess of 1 dB km−1 in the near-infrared region. Transition element contamination may be reduced to acceptable levels (i.e. one part in 1010) by glass refining techniques such as vapor-phase oxidation, which largely eliminates the effects of these metallic impurities.

However, another major extrinsic loss mechanism is caused by absorption due to water (as the hydroxyl or OH ion) dissolved in the glass. These hydroxyl groups are bonded into the glass structure and have fundamental stretching vibrations which occur at wavelengths between 2.7 and 4.2µm depending on group position in the glass network. The fundamental vibrations give rise to overtones appearing almost harmonically at 1.38, 0.95 and 0.72 µm, as illustrated in Figure 2.2. This shows the absorption spectrum for the hydroxyl group in silica. 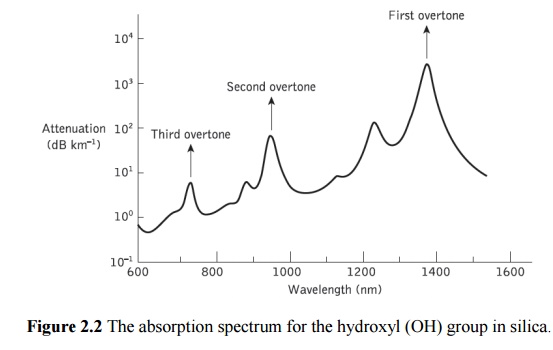 Furthermore, combinations between the overtones and the fundamental SiO2 vibration occur at 1.24, 1.13 and 0.88 μm, completing the absorption spectrum shown in Figure 2.2.It may also be observed in Figure 3.2 that the only significant absorption band in the region below a wavelength of

1 μm is the second overtone at 0.95 μm which causes attenuation of about 1 dB km−1 for one part per million (ppm) of hydroxyl. 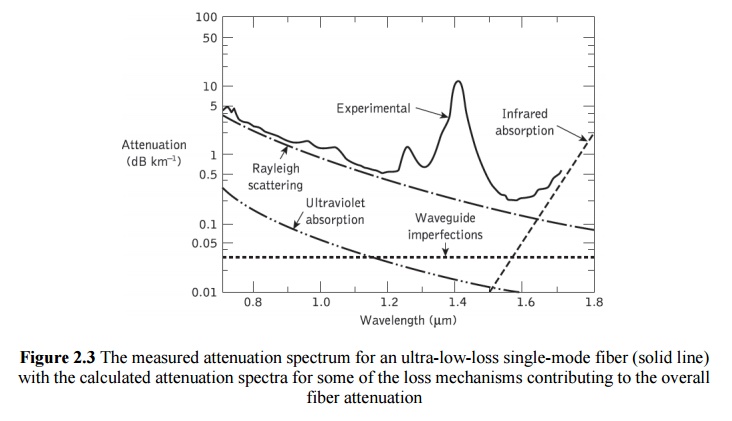 At longer wavelengths the first overtone at 1.383 μm and its sideband at 1.24 μm are strong absorbers giving attenuation of about 2 dB km−1 ppm and 4 dB km−1 ppm respectively. Since most resonances are sharply peaked, narrow windows exist in the longer wavelength region around 1.31 and 1.55 μm which are essentially unaffected by OH absorption once the impurity level has been reduced below one part in 107. This situation is illustrated in Figure 2.3, which shows the attenuation spectrum of a low-loss single-mode fiber produced in 1979. It may be observed that the lowest attenuation for this fiber occurs at a wavelength of 1.55 μm and is 0.2 dB km−1. Despite this value approaching the minimum possible attenuation of around 0.18 dB km−1 at the 1.55 μm wavelength, it should be noted that the transmission loss of an ultra-low-loss pure silica core fiber was more recently measured as 0.1484 dB km−1 at the slightly longer wavelength of 1.57μm.

Although in standard, modern single-mode fibers the loss caused by the primary OH peak at 1.383 μm has been reduced below 1 dB km−1, it still limits operation over significant distances to the lower loss windows at 1.31 and 1.55 μm.