We very often see that forests and lands in our areas are drastically affected by natural calamities (Flood, earthquake) and anthropogenic activities (Fire, over grazing, cutting of trees). Due to these reasons all plants of an area are destroyed and the areas become nude. When we observe this area, over a period of a time we can see that it will be gradually covered by plant community again and become fertile. Such successive replacement of one type of plant community by the other of the same area/ place is known as plant succession. The first invaded plants in a barren area are called pioneers. On the other hand, a series of transitional developments of plant communities one after another in a given area are called seral communities. At the end a final stage and a final plant community gets established which are called as climax and climax community respectively.

a.  Initiating causes - Activity of abiotic (light, temperature, water, fire, soil erosion and wind) and biotic factors (competition among organisms) leads to formation of a barren area or destruction of the existing community of an area, initiating primary or secondary succession respectively.

b. Continuing causes - The processes of migration, aggregation, competition, reaction etc, are the continuing causes which lead to change the plant communities and nature of the soil in an area.

c.      Stabilizing causes - The stabilization of the plant community in an area is primarly controlled by climatic factors rather than other factors.

·         It is a systematic process which causes changes in specific structure of plant community.

·         It is resultant of changes of abiotic and biotic factors.

·         It progresses from simple food chain to complex food web.

·         It modifies the lower and simple life form to the higher life forms.

·         It creates inter-dependence of plants and animals.

The various types of succession have been classified in different ways on the basis of different aspects. These are as follows:

Example: The forest destroyed by fire and excessive lumbering may be re-occupied by herbs over period of times. 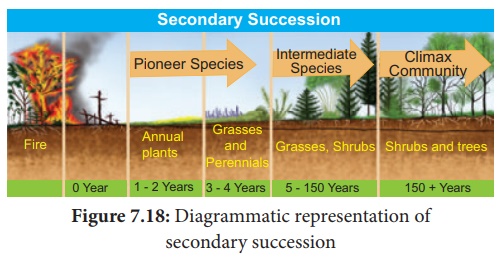 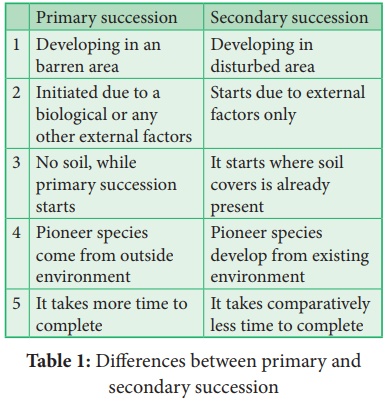 Autogenic succession occurs as a result of biotic factors.The vegetation reacts with its environment and modifies its own environment causing its own replacement by new communities. This is known as autogenicsuccession.Example: In forest ecosystem, the larger trees produce broader leaves providing shade to the forest floor area. It affects the shrubs and herbs which require more light (heliophytes) but supports the shade tolerant species (sciophytes) to grow well.

Allogeneic succession occurs as a result of abiotic factors. The replacement of existing community is caused by other external factors (soil erosion, leaching, etc.,) and not by existing organisms.Example: In a forest ecosystem soil erosion and leaching alter the nutrient value of the soil leading to the change of vegetation in that area.

If the autotrophic organisms like green plants are dominant during the early stages of succession it is called autotrophic succession, this occurs in  the  habitat  which  is  rich  in  inorganic substances. Since, green plants dominate in the beginning of this succession, there is a gradual increase in organic matter and subsequently the energy flow in the ecosystem

If heterotrophic organisms like bacteria, fungi,actinomycetes, and  animals are dominant during the early stages of succession it is called heterotrophic succession. Such a succession takes place in organic habitats. Since heterotrophs dominate in the beginning of such succession, there will be a gradual decrease in the energy content.

There are a number of sequential processes in primary autotrophic succession. They are (1) Nudation, (2) Invasion (migration) (3) Ecesis, (4) Aggregation, (5) Competition, (6) Reaction (7) Stabilization (climax).

1.     Nudation - This is the development of a barren area without any form of life. The barren area may be developed due to topographic (soil erosion, wind action), climatic (hails, storm, fire), and biotic (human activities, epidemics, etc.,) factors.

2.     Invasion - If species invade or reach a barren area from any other area it is called invasion. When the seeds, spores or other propagules of plant species reach the barren area, by air, water and various other agent, it is known as migration.

3.     Ecesis(Establishment)-Afterreachinganew area (invasion), the successful establishment of the species, as a result of adjustment with the conditions prevailing in the area, is known as ecesis. If the establishment is complete, the plant will be able to reproduce sexually in that particular area.

4.     Aggregation - The successful establishment of species, as a result of reproduction and increase in population of the species than the earlier stage is called aggregation.

5.     Competition - It refers to the aggregation of a particular species in an area which leads to inter specific and intraspecific competition among the individuals for water, nutrient, radiant energy, CO2, O2 and space, etc. 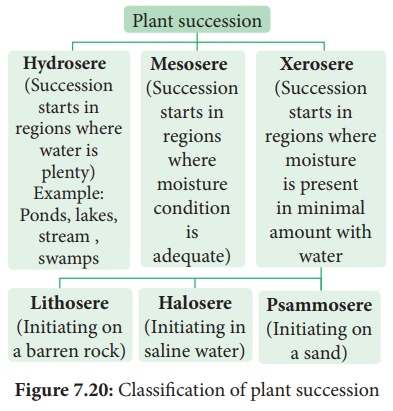 The succession in a freshwater ecosystem is also referred to as hydrosere. Succession in a pond, begins with colonization of the pioneers like phytoplankton and finally ends with the formation of climax community like forest stage. It includes the following stages Fig 7.21.

1. Phytoplankton stage - It is the first stage of succession consisting of the pioneer community like blue green algae, green algae,diatoms, bacteria, etc., The colonization of these organisms enrich the amount of organic matter and nutrients of pond due to their life activities and death. This favors the development of the next seral stages.

2. Submerged plant stage - As the result of death and decomposition of planktons, silt brought from land by rain water, lead to a loose mud formation at the bottom of the pond.

Hence, the rooted submerged hydrophytes begin to appear on the new substratum. Example: Chara, Utricularia, Vallisneria and Hydrilla etc. The death and decay of these plants will build up the substratum of pond to become shallow. Therefore, this habitat now replaces another group of plants which are of floating type.

3. Submerged free floating stage - During this stage, the depth of the pond will become almost 2-5 feet. Hence, the rooted hydrophytic plants and with floating large leaves start colonising the pond. Example: Rooted floating plants like Nelumbo, Nymphaea and Trapa. Some free floating species like Azolla, Lemna, Wolffia and Pistia are also present in this stage. By death and decomposition of these plants, further the pond becomes more shallow. Due to this reason, floating plant species is gradually replaced by another species which makes new seral stage.

4. Reed-swamp stage - It is also called an amphibious stage. During this stage, rooted floating plants are replaced by plants which can live successfully in aquatic as well as aerial environment. Example: Typha, Phragmites, Sagittaria and Scirpus etc. At the end of this stage, water level is very much reduced, making it unsuitable for the continuous growth of amphibious plants.

5. Marsh meadow stage - When the pond becomes swallowed due to decreasing water level, species of Cyperaceae and Poaceae such as Carex, Juncus, Cyperus and Eleocharis colonise the area. They form a mat-like vegetation with the help of their much branched root system. This leads to an absorption and loss of large quantity of water. At the end of this stage, the soil becomes dry and the marshy vegetation disappears gradually and leads to shurb stage.

6. Shrub stage - As the disappearance of marshy vegetation continues, soil becomes dry. Hence, these areas are now invaded by terrestrial plants like shrubs (Salix and Cornus) and trees (Populus and Alnus).

These plants absorb large quantity of water and make the habitat dry. Further, the accumulation of humus with a rich flora of microorganisms produce minerals in the soil, ultimately favouring the arrival of new tree species in the area.

7. Forest stage - It is the climax community of hydrosere. A variety of trees invade the area and develop any one of the diverse type of vegetation. Example:Temperate mixed forest (Ulmus,Acer and Quercus), Tropical rain forest (Artocarpus and Cinnamomum ) and Tropical deciduous forest (Bamboo and Tectona).

Lithosere is a type of xerosere initiating on a barren rock surface. The barren rock is devoid of water and organic matter. A barren rock surface gets mineral deposits due to weathering. This results in the colonization of pioneer organisms like crustose lichens. Through a series of successive seral stages, forest stage (Climax community) is achieved finally. These series of stages are given below Fig 7.22.

1. Crustose lichen stage - The pioneers like crustose lichens (Rhizocarpon and Lecanora) secrete some acids which enhance the weathering of rock. Due to this continuous process, small particles of rocks are formed, which together with decaying lichen make the first thin layer of soil on rock surface. However, this process is very slow. At the end, this habitats become less fit for existing plants and is gradually replaced by another type of lichens called foliose lichen.

2. Foliose lichen stage - Gradually crustose lichens are replaced by foliose lichen like Parmelia and Dermatocarpon etc. These plants have leaf like structures. They also secrete some acids which further loosen the rocks into small soil particles. This process enhances water retaining capacity of the habitat and causes further accumulation of soil particles and humus. Gradual changes make the area less favourable for existing foliose lichen.

3.     Moss stage - When the habitat is changed, the existing foliose lichen starts disappearing and favours the growth of some xerophytic moss like Polytrichum, Tortula and Grimmia. The luxurious growth of moss competes with lichens. Due to the death and decay of mosses, further addition of humus and moisture to the habitat takes place. Therefore, the next seral community tries to replace the moss community.

4. Herb stage - With the gradual disappearance of moss stage, herbaceous plant communities like Aristida, Festuca and Poa, etc., invade the habitat. The extensive growth of these herbs alter the habitat. The decaying leaves, stems, root and other parts of these plants get deposited on the soil surface in the form of humus. It further increases the water holding capacity of soil. These conditions become more suitable for shrubs.

5. Shrub stage - The habitat change results in the invasion of shrubs like Rhus, Zizyphus, Capparis and dominated by herbaceous plants. The death and decaying of shrubs further enrich the habitat with soil and humus. Therefore, the shrubs are replaced by trees which constitute the climax community.

6. Forest stage - The trees capable of growing in xerophytic condition try to invade the area which was occupied previously by shrubs. Further increasing the humus content of the soil favours the arrival of more trees and vegetation finally become mesophytes. As the trees are deeply rooted and much branched , they absorb more quantity of water and nutrients. After a long interval, a complete harmony is established among the plant communities. The climax stage remains unchanged unless some major environmental changes disturb it

Of the 6 stages of lithosere succession, stage 1 is occupied by pioneer community and the stage 6 is occupied by climax community. The stages 2 to 5 are occupied by seral communities. Seral stages occurring on the same rock surfaces.

·         Succession is a dynamic process. Hence an ecologist can access and study the seral stages of a plant community found in a particular area.

·         The knowledge of ecological succession helps to understand the controlled growth of one or more species in a forest.

·         Utilizing the knowledge of succession, even dams can be protected by preventing siltation.

·         It gives information about the techniques to be used during reforestation and afforestation.

·         Plant succession helps to maintain species diversity in an ecosystem.

·         Patterns of diversity during succession are influenced by resource availability and disturbance by various factors.

·         Primary succession involves the colonization of habitat of an area devoid of life.

·         Secondary succession involves the reestablishment of a plant community in disturbed area or habitat.

·         Forests and vegetation that we come across all over the world are the result of plant succession.