15. Productivity of profundal zone will be low. Why?

Answer: (i) The deeper region of a pond below the limnetic zone is called profundal zone with no effective light penetration and predominance of heterotrophs. Hence producers are not found here.

(ii) The primary productivity through photosynthesis of littoral and limnetic zone of the pond is more due to greater penetration of light than the profundal zone.

The total amount of food energy or organic matter or biomass produced in an ecosystem by autotrophs through the process of photosynthesis is called gross primary productivity.

The proportion of energy which remains after respiration loss in the plant is called net primary productivity. It is also called as apparent photosynthesis. Thus the difference between GPP and respiration is known as NPP.

17. Pyramid of energy is always upright. Give reasons

18. Write some plants are found in sub alpine forest.

19. What will happen if all producers are removed from ecosystem?

Answer: If all producers are removed, then there will be no primary productivity and there will be no biomass available for consumption by higher trophic levels or heterotrophs. Thus the food chain / food web will collapse leading to destruction of organisms and will affect functioning of ecosystem.

21. Name of the food chain which is generally present in all type of ecosystem. Explain and write their significance.

22. Shape of pyramid in a particular ecosystem is always different in shape. Explain with example.

A graphical representation of the number of organisms present at each successive trophic level in an ecosystem is called pyramids of number. There are three different shapes of pyramids upright, spindle and inverted.

There is a gradual decrease in the number of organisms in each trophic level from producers to primary consumers and then to secondary consumers, and finally to tertiary consumers. Therefore, pyramids of number in grassland and pond ecosystem are always upright.

In a forest ecosystem the pyramid of number is somewhat different in shape, it is because the base (T1) of the pyramid occupies large sized trees (Producer) which are lesser in number. Herbivores (T2) (Fruit eating birds, elephant, deer) occupying second trophic level, are more in number than the producers. In final trophic level (T4), tertiary consumers (lion) are lesser in number than the secondary consumer (T3) (fox and snake). Therefore, the pyramid of number in forest ecosystem looks spindle shaped,

The pyramid of number in a parasite ecosystem is always inverted, because it starts with a single tree. Therefore there is gradual increase in the number of organisms in successive tropic levels from producer to tertiary consumers.

23. Generally human activities are against to the ecosystem, where as you a student how will you help to protect ecosystem?

Answer: If we change our everyday life style, we can help to protect the planet and its ecosystem. Therefore, we have to practice the following in our day to day life:

(i) Buy and use only ecofriendly products and recycle them.

(iv) Reduce the use of natural resources.

(v) Recycle the waste and reduce the amount of waste you produce.

(vii) Reduce or eliminate the use of house-hold chemicals and pesticides.

(viii) Maintain your cars and vehicles properly. (In order to reduce carbon emission)

(ix) Create awareness and educate about ecosystem protection among your friends and family members and ask them to find out solution to minimise this problem.

(i) It refers to the changing of one’s lifestyle for the safety and benefits of the environments (Reduce, Reuse, Recycle)

(ii) Way to go green and save green

(a) Close the tap when not in use.

(b) Switch off the electrical gadgets when not in use.

(c) Never use plastics and replace them with biodegradable products

24. Generally in summer the forest are affected by natural fire. Over a period of time it recovers itself by the process of successions . Find out the types of succession and explain.

(i) The development of a plant community in an area where an already developed community has been destroyed by some natural disturbance. Ex. Fire is known as secondary successions.

(ii) Generally, this succession takes less time than the time taken for primary successions. Ex: The forest destroyed by fire and excessive lumbering may be re-occupied by herbs over period of times.

25. Draw a pyramid from following details and explain in brief.

Quantities of organisms are given-Hawks-50, 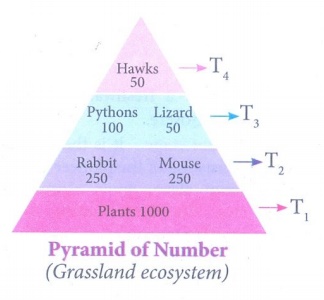 This is a pyramid of number and is based on grassland ecosystem.

(iii) This is followed by secondary consumers. (150)

Therefore there is a gradual decrease in the number of organisms in each trophic level from producers to tertiary consumers. Therefore the pyramid of number in grassland ecosystem is upright.

Answer: This is hydrosere plant succession

This type of succession starts in regions where water is plenty.

The succession in a freshwater ecosystem is referred to as hydrosere.

1. Phytoplankton stage - It is the first stage of succession consisting of the pioneer community like blue green algae, green algae, diatoms, bacteria, etc., The colonization of these organisms enrich the amount of organic matter and nutrients of pond due to their life activities and death.

2. Submerged plant stage - As the result of death and decomposition of planktons, silt brought from land by rain water, lead to a loose mud formation at the bottom of the pond. Hence, the rooted submerged hydrophytes begin to appear on the new substratum. Example: Chara, Utricularia. The death and decay of these plants will build up the substratum of pond to become shallow and replaces another group of plants which are of floating type.

3. Submerged free floating stage - During this stage, the depth of the pond will become almost 2-5 feet. Hence, the rooted hydrophytic plants colonise the pond. Example: Rooted floating plants like Nelumbo, Nymphaea and Trapa. Some free floating species like Azolla, Lemna, Wolffia and Pistia are also present in this stage. By death and decomposition of these plants, further the pond becomes more shallow and floating plant species is gradually replaced by another species.

4. Reed-swamp stage - It is also called an amphibious stage. During this stage, rooted floating plants are replaced by plants which can live successfully in aquatic as well as aerial environment. Example: Typha, Phragmites. At the end of this stage, water level is very much reduced, making it unsuitable for the continuous growth of amphibious plants.

5. Marsh meadow stage - When the pond becomes swallowed due to decreasing water level, species of Cyperaceae and Poaceae such as Carex, Juncus, etc., colonise the area. They form a mat-like vegetation with the help of their much branched root system. This leads to an absorption and loss of large quantity of water. At the end of this stage, the soil becomes dry and the marshy vegetation disappears gradually and leads to shrub stage.

6. Shrub stage - As the disappearance of marshy vegetation continues, soil becomes dry. Hence, these areas are now invaded by terrestrial plants like shrubs (Salix and Cornus) and trees (Populus and Alnus). These plants absorb large quantity of water and make the habitat dry. Further, the accumulation of humus with a rich flora of microorganisms produce minerals in the soil, ultimately favouring the arrival of new tree species in the area.

7. Forest stage - It is the climax community of hydrosere. A variety of trees invade the area and develop any one of the diverse type of vegetation. Example: Temperate mixed forest (Ulmus, Acer and Quercus), Tropical rain forest (Artocarpus and Cinnamomum) and Tropical deciduous forest (Bamboo and Tectona).