For us to see, light rays must be focused on the retina, and the resulting nerve impulses must be trans-mitted to the visual areas of the cerebral cortex in the brain.

For us to see, light rays must be focused on the retina, and the resulting nerve impulses must be trans-mitted to the visual areas of the cerebral cortex in the brain.

Refraction of light rays is the deflection or bend-ing of a ray of light as it passes through one object and into another object of greater or lesser density. The refraction of light within the eye takes place in the fol-lowing pathway of structures: the cornea, aqueous humor, lens, and vitreous humor. The lens is the only adjustable part of the refraction system. When looking at distant objects, the ciliary muscle is relaxed and the lens is elongated and thin. When looking at near objects, the ciliary muscle contracts to form a smaller circle, the elastic lens recoils and bulges in the middle, and has greater refractive power.

When light rays strike the retina, they stimulate chemical reactions in the rods and cones. In rods, the chemical rhodopsin breaks down to form scotopsin and retinal (a derivative of vitamin A). This chem-ical reaction generates an electrical impulse, and rhodopsin is then resynthesized in a slower reaction. Adaptation to darkness, such as going outside at night, takes a little while because being in a well-lit area has broken down most of the rhodopsin in the rods, and resynthesis of rhodopsin is slow. The opposite situa-tion, perhaps being suddenly awakened by a bright light, can seem almost painful. What happens is this: In darkness the rods have resynthesized a full supply of rhodopsin, and the sudden bright light breaks down all the rhodopsin at the same time. The barrage of impulses generated is very intense, and the brain may interpret any intense sensation as pain. A few minutes later the bright light seems fine because the rods are recycling their rhodopsin slowly, and it is not breaking down all at once.

Chemical reactions in the cones, also involving retinal, are brought about by different wavelengths of light. It is believed that there are three types of cones: red-absorbing, blue-absorbing, and green-absorbing cones. Each type absorbs wavelengths over about a third of the visible light spectrum, so red cones, for example, absorb light of the red, orange, and yellow wavelengths. The chemical reactions in cones also generate electrical impulses. 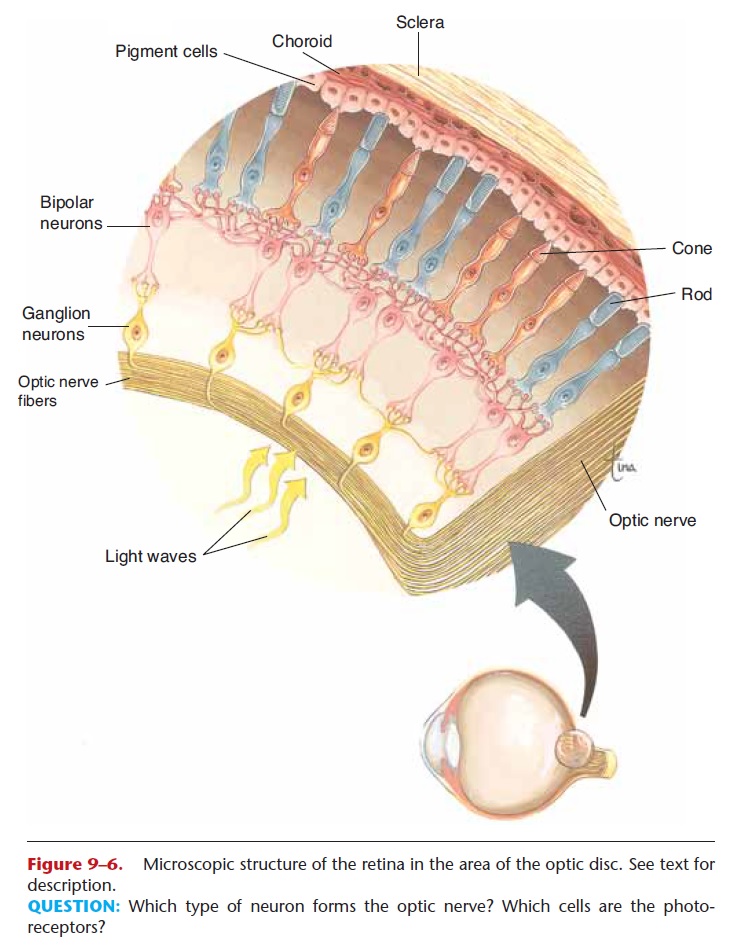 The impulses from the rods and cones are trans-mitted to ganglion neurons (see Fig. 9–6); these con-verge at the optic disc and become the optic nerve, which passes posteriorly through the wall of the eye-ball. Ganglion neurons also seem to have a photo-receptor chemical (called melanopsin) that may contribute to the daily resetting of our biological clocks.

The optic nerves from both eyes come together at the optic chiasma (or chiasm), just in front of the pituitary gland (see Fig. 8–11). Here, the medial fibers of each optic nerve cross to the other side. This cross-ing permits each visual area to receive impulses from both eyes, which is important for binocular vision. 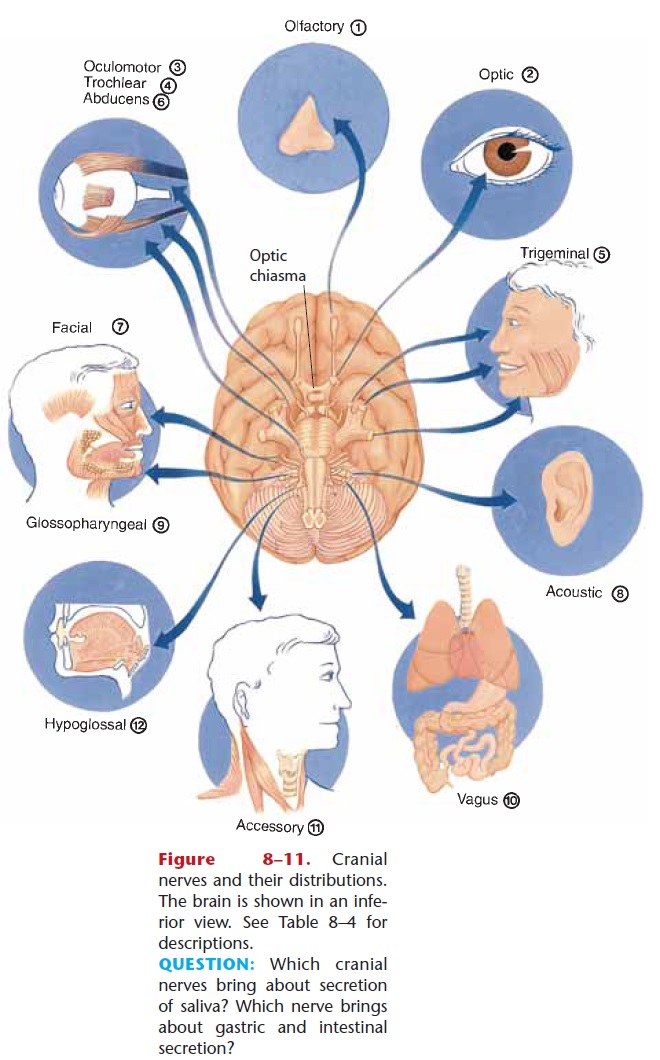 The visual areas are in the occipital lobes of the cerebral cortex. Although each eye transmits a slightly different picture (look straight ahead and close one eye at a time to see the difference between the two pic-tures), the visual areas put them together, or integrate them, to make a single image that has depth and three dimensions. This is called binocular vision. The visual areas also right the image, because the image on the retina is upside down. The image on film in a cam-era is also upside down, but we don’t even realize that because we look at the pictures right side up. The brain just as automatically ensures that we see our world right side up.

Also for near vision, the pupils constrict to block out peripheral light rays that would otherwise blur the image, and the eyes converge even further to keep the images on the corresponding parts of both retinas.

The importance of pupil constriction can be demon-strated by looking at this page through a pinhole in a piece of paper. You will be able to read with the page much closer to your eye because the paper blocks out light from the sides.

The importance of convergence can be demon-strated by looking at your finger placed on the tip of your nose. You can feel your eyes move medially (“cross”) in maximum convergence. If the eyes don’t converge, the result is double vision; the brain cannot make the very different images into one, and settles for two. This is temporary, however, because the brain does not like seeing double and will eventually sup-press one image.

You have probably heard of the condition called “lazy eye” (the formal name is strabismus), in which a person’s eyes (the visual axis of each) cannot be directed at precisely the same point. True convergence is not possible and, if untreated, the brain simply will not use the lazy eye image. That eye may stop focus-ing and become functionally blind because the brain is ignoring the nerve impulses from it. Such loss of vision is called amblyopia. Correction of a lazy eye may involve eye exercises (to make the lazy eye straighten out), a patch over the good eye (to make the lazy eye straighten out and take over), or surgery to correct an imbalance of the extrinsic muscles. You can show yourself the benefits of converging eyes the next time you are a passenger in a car (not the driver). As the car is moving, close one eye. Does the oncoming landscape seem to flatten out, lose dimension? This is loss of depth perception and some of the three dimen-sionality that our brains provide. 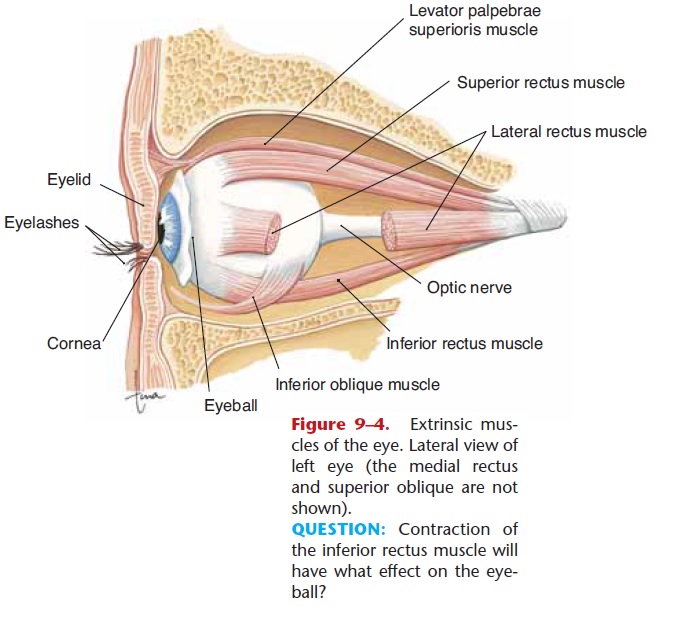