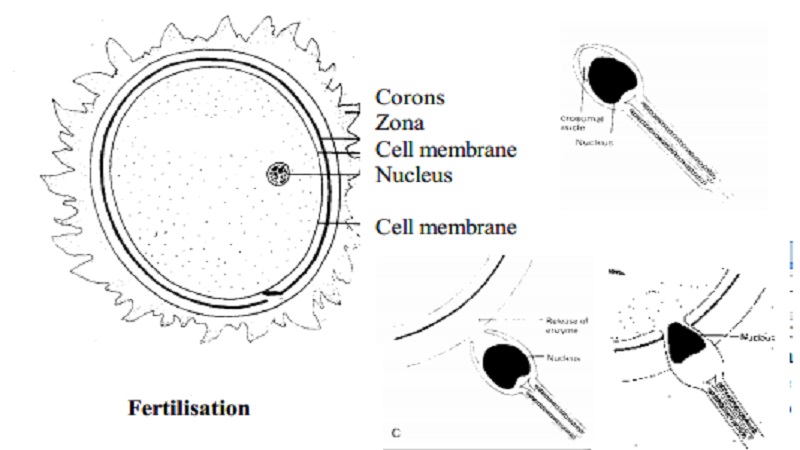 Menstrual cycle or uterine cycle:It is a series of changes in the uterus resulting in the discharge of blood from the vagina each month.

It is a series of changes in the uterus resulting in the discharge of blood from the vagina each month. Menstruation can be defined as, 'sloughing and discharge of the lining of the uterus if conception does not take place.' This time varies in different women and also from time to time-in same woman.

The first day of the cycle is the first day when bleeding begins. The ovarian hormones control the menstrual cycle. There are three main phases and they affect the tissue structures of the endometrium. The average time of menstrual cycle is 28 days and recurs regularly from puberty to menopause except in pregnancy. The three phases are:

2. Secretary phase: The secretary phase follows ovulation and is under the influence of progesterone and oestrogen from the corpus luteum. Leutinising hormone level increases in blood. Under the combined stimulus of estrogen and progesterone, the endometrium reaches the peak of its thickening and vascularisation.

3. Menstrual phase: It is characterised by vaginal bleeding, lasts for 3 - 5 days. On absence of fertilization, the thickened endometrium is shedded.

Two Gonadotrophic hormones are released by the anterior pituitary gland. They are

1.     Follicular stimulating hormone:FSH is primarily responsible for stimulating the ovaries to secrete oestrogen and for maturation of ovum.

2.     Luteinising Hormone (LH): ): LH is primarily responsible for stimulating the orpus luteum for productoin of progesterone.

Puberty: This is the period in which, the reproductive organs develop and reach maturity. The first signs are breast development and appearance of pubic hair. The body grows considerably and takes on the female contour. Puberty culminates in the onset of menstruation, the first period being called menarche. The first few cycles are not accompanied by ovulation. Puberty usually occurs between 12 and 14 years.

Menopause: It is the end of a woman' s reproductive life, characterised by the gradual cessation of menstruation. The period first becomes irregular and then ceases altogether. This occurs between the ages of 45 to 50. It is the normal part of aging and maturation. Menstruation ceases because the ovaries are no longer active. No more ovarian hormones are produced. The reproductive organs become atrophied.

Fertilization: Following ovulation, the ovum about (0.15 mm) in diameter passes into the fallopian tube and moves towards uterus. If coitus takes place at this time, the alkaline mucus attracts the spermatozoa. About 300 million sperms are deposited in the posterior fornix of the vagina. Those which are propelled by the cervical mucus reach the fallopian tube and others are destroyed by the acid medium of the vagina.

The matured sperm is capable of producing the enzyme hyaluronidase, which allows the sperm to penetrate the cell membrane, surrounding the ovum. Many sperm are needed for this, but only one will enter into the ovum and fertilisation occurs. After this, the membrane is sealed to prevent the entry of any further sperm and the nuclei of the two cells fuse.

Implantation of the fertilised ovum (embedding) into the uterine cavity (endometrium) is called as nidation or nesting. Normally this occurs by the 11th day after ovulation and the endometrium closes over it completely.

Development of the fertilised ovum:

Fertilised ovum reaches the uterus by 3-4 days. Cell division takes place as 2 into 4,8,16, etc, till a cluster of cells formed known as morula (mulberry). Next a fluid filled cavity, a blastocele appears in the morula and it is known as blastocyst. Outside of blastocyst there is a single layer of cells known as trophoblast, while the remaining cells are clumped together forming an inner cell mass.

The trophablast forms the placenta and chorion while the inner cell mass become fetus and amnion.

Formation of fetal membrane and placenta:

The trophoblast has two layers,

1.     Outer syncitiotrophoblast, which erodes the endometrium in the process of embedding.

2.     The inner cytotrophoblast produces a hormone called human chorionic gonadotrophin (HCG) which reacts on corpus lutuem to continue the pregnancy by producing oestrogen and progesterone.The trophoblast develops as placenta which will nourish the fetus until delivery.

1.     From the ectoderm skin and nervous system are formed.

2.     From the mesoderm bones and muscles, heart and blood vessels and certain internal organs are formed.

3.     From the endoderm mucous membranes and glands are formed.

During the first three weeks following conceptual the fertilised ovum is termed as zygote. From 3-8 weeks, it is termed as embryo. The organs and systems are developed by 7th week. After 8 weeks, till birth it is termed as fetus.

The placenta is a remarkable organ. It originates from the trophoblastic layer of the fertilised ovum. The placenta is completely formed and starts functioning from 10 weeks after fertilisation.

The placenta is a round flat mass about 20 cm in diameter and 2.5 cm thick at its center. It weighs approximately 1/6th of the baby' s weight. The fetus obtains oxygen and excretes carbon dioxide through the placenta. Oxygen from the mother' s hemoglobin passes into the fetal blood by diffusion. Similarly the fetus gives off carbon dioxide into the maternal blood.

The fetus obtains amino acids, glucose, vitamins, calcium, phosphorus, iron and other minerals from the maternal blood through the placenta.

1.     The placenta also stores glucose in the form of glycogen. It also stores iron and fats soluble vitamins.

2.     The waste products such as carbon dioxide, bilirubin and urea are excreted from the fetus through the placenta.

3.     The placenta prevents passing of microorganisms from the mother to the fetus to some extent.

The fetal sac consists of a double membrane, which contains the fetus and the amniotic fluid.

1.     The chorion is the outer thick, opaque membrane. It is derived from the trophoblastic cells.

2.     The amnion is the inner smooth tough membrane. It is derived from the inner cell mass

It is the clear, pale, straw-coloured fluid in which the fetus floats. It is 500-800 ml in quantity at a term. Presence of amniotic fluid allows for growth and free movement of the fetus and it acts as a shock absorber thereby protecting the fetus.

The cord extends from the fetus to the placenta and transmits the umbilical blood vessels, two arteries and one vein. These are enclosed by Wharton' s jelly.

The length of the cord is about 50 cm.

Summary of fetal growth and development: 0-4 weeks after conception:

3.All major organs laid down in primitive form.

4.External genitalia present but sex is not  distinguishable.

Kidneys begin to function and the fetus passes urine from weeks.

4.Moves freely (not felt by mother)

4.Finger-nails can be seen.

5.Skin cells begin to be renewed.

1.Most organs become capable of functioning.

2.Periods of sleep and activity present.