All the gases of concern in respiratory physiology are simple molecules that are free to move among one another, which is the process called “diffusion.”

All the gases of concern in respiratory physiology are simple molecules that are free to move among one another, which is the process called “diffusion.” This is also true of gases dissolved in the fluids and tissues of the body.

For diffusion to occur, there must be a source of energy. This is provided by the kinetic motion of the molecules themselves. Except at absolute zero temperature, all molecules of all matter are continually undergoing motion. For free molecules that are not physically attached to others, this means linear movement at high veloc-ity until they strike other molecules. Then they bounce away in new directions and continue until striking other molecules again. In this way, the molecules move rapidly and randomly among one another.

Net Diffusion of a Gas in One Direction—Effect of a Concentration Gradient. If a gas chamberor a solution has a high concentration of a particular gas at one end of the chamber and a low concentration at the other end, as shown in Figure 39–1, net diffusion of the gas will occur from the high-concentration area toward the low-concentration area. The reason is obvious: There are far more molecules at end A of the chamber to diffuse toward end B than there are molecules to diffuse in the opposite direc-tion. Therefore, the rates of diffusion in each of the two directions are proportion-ately different, as demonstrated by the lengths of the arrows in the figure. 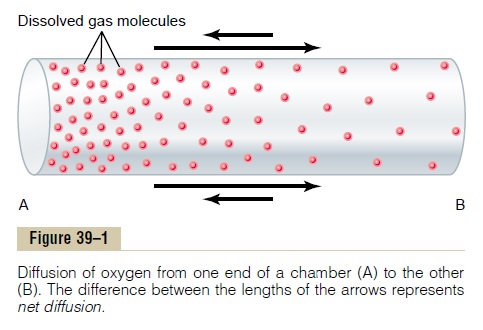 In respiratory physiology, one deals with mixtures of gases, mainly of oxygen, nitrogen, and carbon dioxide.

Pressures of Gases Dissolved in Water and Tissues

Factors That Determine the Partial Pressure of a Gas Dissolved in a Fluid. The partial pressure of a gas in a solution isdetermined not only by its concentration but also by the solubility coefficient of the gas. That is, some types ofmolecules, especially carbon dioxide, are physically or chemically attracted to water molecules, whereas others are repelled. When molecules are attracted, far more of them can be dissolved without building up excess partial pressure within the solution. Conversely, in the case of those that are repelled, high partial pressure will develop with fewer dissolved molecules. These relations are expressed by the following formula, which isHenry’s law:

When partial pressure is expressed in atmospheres (1 atmosphere pressure equals 760 mm Hg) and con-centration is expressed in volume of gas dissolved in each volume of water, the solubility coefficients for important respiratory gases at body temperature are the following:

From this table, one can see that carbon dioxide is more than 20 times as soluble as oxygen. Therefore, the partial pressure of carbon dioxide (for a given concen-tration) is less than one twentieth that exerted by oxygen.

Diffusion of Gases Between the Gas Phase in the Alveoli and the Dissolved Phase in the Pulmonary Blood. The partial pressureof each gas in the alveolar respiratory gas mixture tends to force molecules of that gas into solution in the blood of the alveolar capillaries. Conversely, the molecules of the same gas that are already dissolved in the blood are bouncing randomly in the fluid of the blood, and some of these bouncing molecules escape back into the alveoli. The rate at which they escape is directly pro-portional to their partial pressure in the blood.

When nonhumidified air is breathed into the respiratory passageways, water immediately evaporates from the surfaces of these passages and humidifies the air. This results from the fact that water molecules, like the dif-ferent dissolved gas molecules, are continually escaping from the water surface into the gas phase. The partial pressure that the water molecules exert to escape through the surface is called the vapor pressure of the water. At normal body temperature, 37°C, this vapor pressure is 47 mm Hg. Therefore, once the gas mixture has become fully humidified—that is, once it is in “equi-librium” with the water—the partial pressure of the water vapor in the gas mixture is 47 mm Hg. This partial pressure, like the other partial pressures, is designated PH2O.

Quantifying the Net Rate of Diffusion in Fluids. In addition tothe pressure difference, several other factors affect the rate of gas diffusion in a fluid. They are (1) the solubil-ity of the gas in the fluid, (2) the cross-sectional area of the fluid, (3) the distance through which the gas must diffuse, (4) the molecular weight of the gas, and (5) the temperature of the fluid. In the body, the last of these factors, the temperature, remains reasonably constant and usually need not be considered.

in which D is the diffusion rate, DP is the partial pres-sure difference between the two ends of the diffusion pathway, A is the cross-sectional area of the pathway, S is the solubility of the gas, d is the distance of diffusion, and MW is the molecular weight of the gas.

Diffusion of Gases Through Tissues