Composition of Alveolar Air - Its Relation to Atmospheric Air 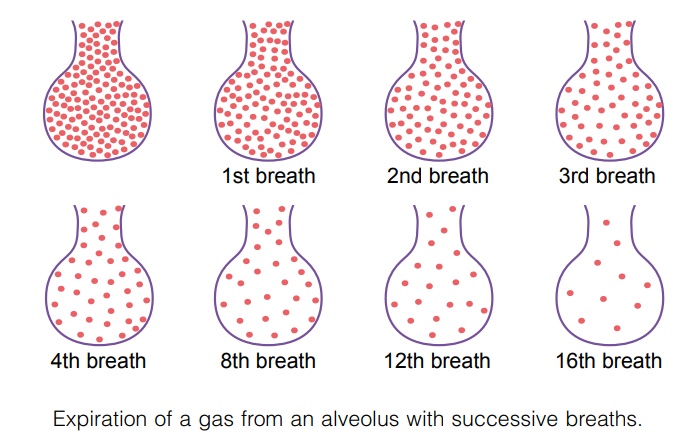 Alveolar air does not have the same concentrations of gases as atmospheric air by any means, which can readily be seen by comparing the alveolar air composition .

Composition of Alveolar Air - Its Relation to Atmospheric Air

Humidification of the Air in the Respiratory Passages. Table39–1 shows that atmospheric air is composed almost entirely of nitrogen and oxygen; it normally contains almost no carbon dioxide and little water vapor. However, as soon as the atmospheric air enters the res-piratory passages, it is exposed to the fluids that cover the respiratory surfaces. Even before the air enters the alveoli, it becomes (for all practical purposes) totally humidified.

Rate at Which Alveolar Air Is Renewed by Atmospheric Air

It was pointed out that the average male functional residual capacity of the lungs (the volumeof air remaining in the lungs at the end of normal expi-ration) measures about 2300 milliliters. Yet only 350 milliliters of new air is brought into the alveoli with each normal inspiration, and this same amount of old alveolar air is expired. Therefore, the volume of alve-olar air replaced by new atmospheric air with each breath is only one seventh of the total, so that multi-ple breaths are required to exchange most of the alve-olar air. Figure 39–2 shows this slow rate of renewal of the alveolar air. In the first alveolus of the figure, an excess amount of a gas is present in the alveoli, but note that even at the end of 16 breaths, the excess gas still has not been completely removed from the alveoli. 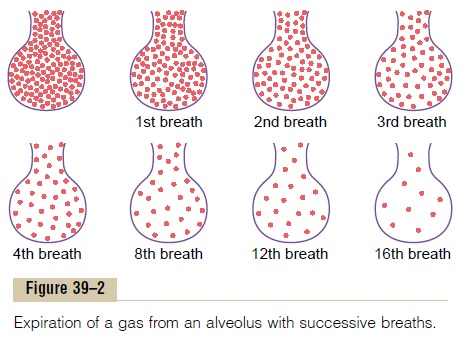 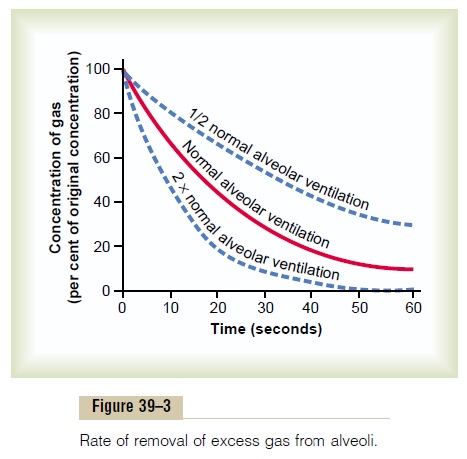 Importance of the Slow Replacement of Alveolar Air. The slowreplacement of alveolar air is of particular importance in preventing sudden changes in gas concentrations in the blood. This makes the respiratory control mecha-nism much more stable than it would be otherwise, and it helps prevent excessive increases and decreases in tissue oxygenation, tissue carbon dioxide concentra-tion, and tissue pH when respiration is temporarily interrupted.

Oxygen Concentration and Partial Pressure in the Alveoli

(1) the rate of absorption of oxygen into the blood and

(2) the rate of entry of new oxygen into the lungs by the ventilatory process. 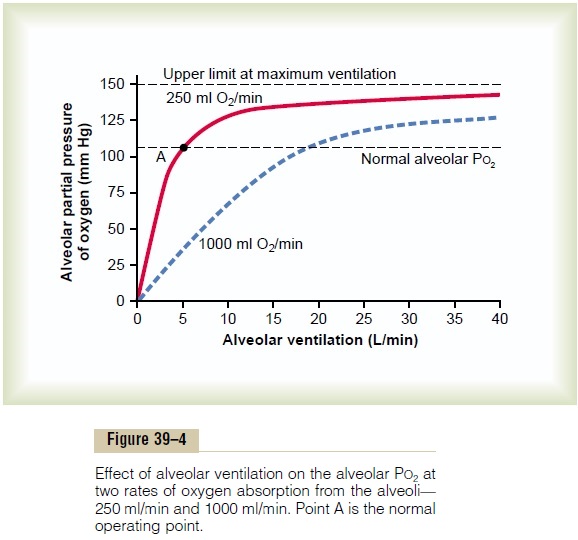 Figure 39–4 shows the effect of both alveolar venti-lation and rate of oxygen absorption into the blood on the alveolar partial pressure of oxygen (PO2). One curve represents oxygen absorption at a rate of 250 ml/min, and the other curve represents a rate of 1000 ml/min. At a normal ventilatory rate of 4.2 L/min and an oxygen consumption of 250 ml/min, the normal operating point in Figure 39–4 is point A. The figure also shows that when 1000 milliliters of oxygen is being absorbed each minute, as occurs during moderate exercise, the rate of alveolar ventilation must increase fourfold to maintain the alveolar PO2 at the normal value of 104 mm Hg.

Another effect shown in Figure 39–4 is that an extremely marked increase in alveolar ventilation can never increase the alveolar PO2above 149 mm Hg as long as the person is breathing normal atmospheric air at sea level pressure, because this is the maximum PO2 in humidified air at this pressure. If the person breathes gases that contain partial pressures of oxygen higher than 149 mm Hg, the alveolar PO2 can approach these higher pressures at high rates of ventilation.

CO2  Concentration and Partial Pressure in the Alveoli 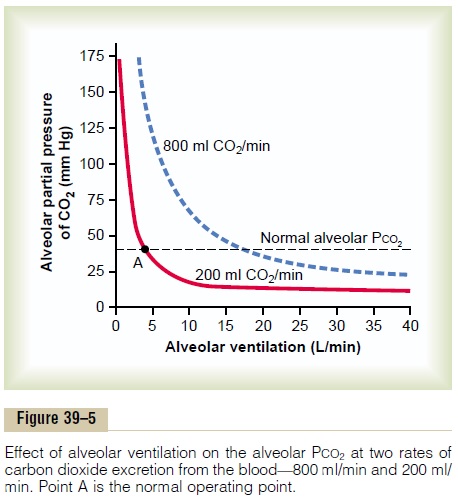 Two other facts are also evident from Figure 39–5: First, the alveolar PCO2increases directly in proportion to the rate of carbon dioxide excretion, as representedby the fourfold elevation of the curve (when 800 milliliters of CO2 are excreted per minute). Second, the alveolar PCO2 decreases in inverse proportion to alveolar ventilation. Therefore, the concentrations andpartial pressures of both oxygen and carbon dioxide in the alveoli are determined by the rates of absorption or excretion of the two gases and by the amount of alveolar ventilation. 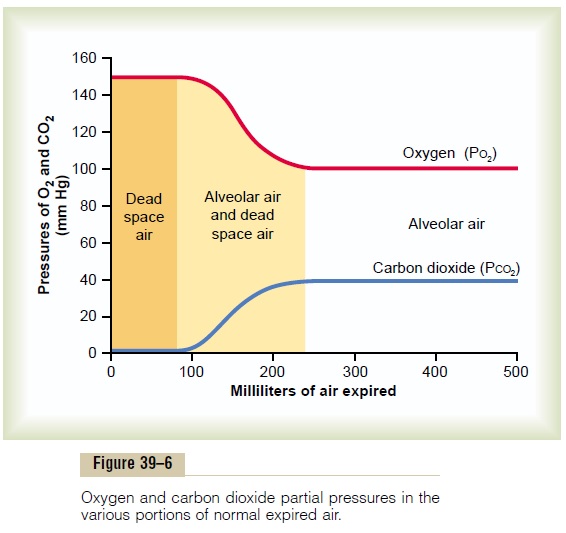 Normal expired air, containing both dead space air and alveolar air, has gas concentrations and partial pressures approximately as shown in Table 39–1—that is, concentrations between those of alveolar air and humidified atmospheric air.