Diffusion of Gases Through the Respiratory Membrane

Diffusion of Gases Through the Respiratory Membrane

Respiratory Unit. Figure 39–7 shows therespiratory unit(also called “respiratory lobule”), which is composed of a respiratory bronchiole, alveolar ducts, atria, and alveoli. There are about 300 million alveoli in the twolungs, and each alveolus has an average diameter of about 0.2 millimeter. The alveolar walls are extremely thin, and between the alveoli is an almost solid network of interconnecting capillaries, shown in Figure 39–8. Indeed, because of the extensiveness of the capillary plexus, the flow of blood in the alveolar wall has been described as a “sheet” of flowing blood. Thus, it is obvious that the alveolar gases are in very close proximity to the blood of the pulmonary capil-laries. Further, gas exchange between the alveolar air 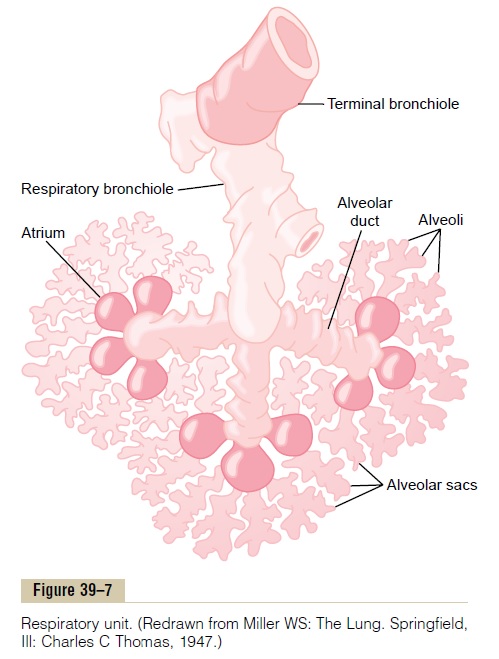 and the pulmonary blood occurs through the mem-branes of all the terminal portions of the lungs, not merely in the alveoli themselves. All these membranes are collectively known as the respiratory membrane, also called the pulmonary membrane. 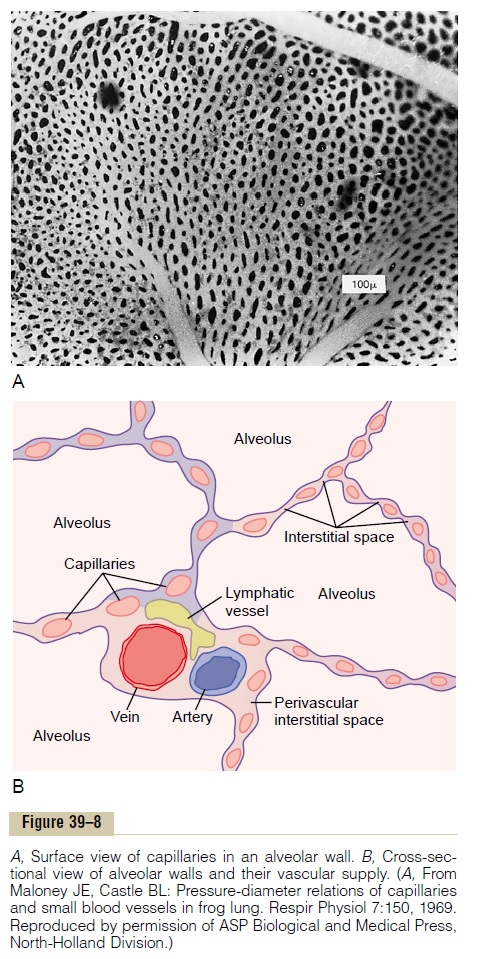 1.     A layer of fluid lining the alveolus and containing surfactant that reduces the surface tension of the alveolar fluid

4.     A thin interstitial space between the alveolar epithelium and the capillary membrane 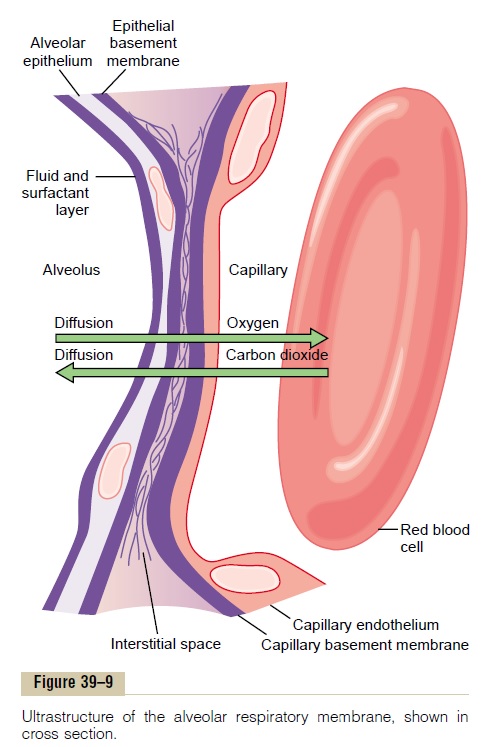 Despite the large number of layers, the overall thickness of the respiratory membrane in some areas is as little as 0.2 micrometer, and it averages about 0.6 micrometer, except where there are cell nuclei. From histological studies, it has been estimated that the total surface area of the respiratory membrane is about 70 square meters in the normal adult human male. This is equivalent to the floor area of a 25–by-30–foot room. The total quantity of blood in the capillaries of the lungs at any given instant is 60 to 140 milliliters. Now imagine this small amount of blood spread over the entire surface of a 25–by-30–foot floor, and it is easy to understand the rapidity of the respiratory exchange of oxygen and carbon dioxide.

The average diameter of the pulmonary capillaries is only about 5 micrometers, which means that red blood cells must squeeze through them. The red blood cell membrane usually touches the capillary wall, so that oxygen and carbon dioxide need not pass through significant amounts of plasma as they diffuse between the alveolus and the red cell. This, too, increases the rapidity of diffusion.

The diffusion coefficient for transfer of each gas through the respiratory membrane depends on the gas’s solubility in the membrane and, inversely, on the square root of the gas’s molecular weight. The rateof diffusion in the respiratory membrane is almost exactly the same as that in water, for reasons explained earlier. Therefore, for a given pressure difference, carbon dioxide diffuses about 20 times as rapidly as oxygen. Oxygen diffuses about twice as rapidly as nitrogen.

Diffusing Capacity of the Respiratory Membrane

Diffusing Capacity for Oxygen. In the average young man,the diffusing capacity for oxygen under resting condi-tions averages 21 ml/min/mm Hg. In functional terms, what does this mean? The mean oxygen pressure difference across the respiratory membrane during normal, quiet breathing is about 11 mm Hg. Multipli-cation of this pressure by the diffusing capacity (11 x 21) gives a total of about 230 milliliters of oxygen dif-fusing through the respiratory membrane each minute; this is equal to the rate at which the resting body uses oxygen.

Change in Oxygen Diffusing Capacity During Exercise. During strenuous exercise or other conditions that greatly increase pulmonary blood flow and alveolar ventilation, the diffusing capacity for oxygen increases in young men to a maximum of about 65 ml/min/ mm Hg, which is three times the diffusing capacity under resting conditions. This increase is caused by several factors, among which are (1) opening up of many previously dormant pulmonary capillaries or extra dilation of already open capillaries, thereby increasing the surface area of the blood into which the oxygen can diffuse; and (2) a better match between the ventilation of the alveoli and the perfusion of the alveolar capillaries with blood, called the ventilation-perfusion ratio, which is explained in detail later. Therefore, during exercise, oxygenation of the blood is increased not only by increased alveolar ventilation but also by greater diffusing capacity of the respiratory membrane for transporting oxygen into the blood.

Diffusing Capacity for Carbon Dioxide. The diffusing capac-ity for carbon dioxide has never been measured because of the following technical difficulty: Carbon dioxide diffuses through the respiratory membrane so rapidly that the average PCO2 in the pulmonary blood is not far different from the PCO2 in the alveoli—the average difference is less than 1 mm Hg—and with the available techniques, this difference is too small to be measured. 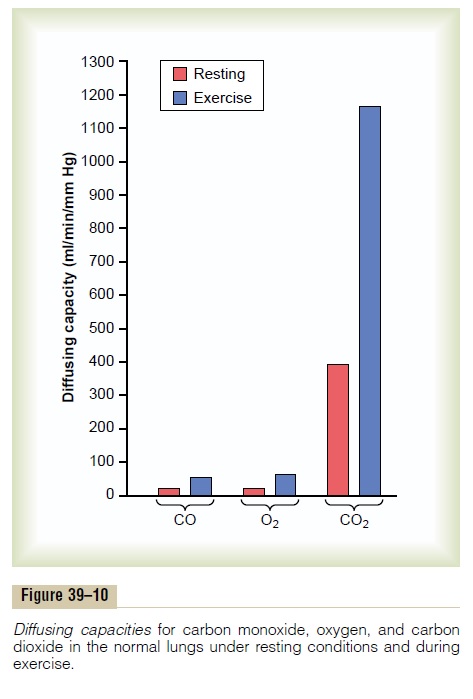 MeasurementofDiffusing Capacity—The CarbonMonoxide Method. The oxygen diffusing capacity can be calculatedfrom measurements of (1) alveolar PO2, (2) PO2 in the pulmonary capillary blood, and (3) the rate of oxygen uptake by the blood. However, measuring the PO2 in the pulmonary capillary blood is so difficult and so impre-cise that it is not practical to measure oxygen diffusing capacity by such a direct procedure, except on an experimental basis.