The physical examination is an important part of the compre-hensive psychiatric evaluation for several reasons.

The physical examination is an important part of the compre-hensive psychiatric evaluation for several reasons. First, many patients who present with psychiatric symptoms may have under-lying medical problems that are causing or exacerbating the pre-senting symptoms. For example, an agitated, delirious patient may be septic or a patient being treated for an autoimmune disorder who develops new onset paranoia may have a steroid-induced

psychosis. Secondly, the patient’s physical capacity to tolerate certain psychiatric medications, such as tricyclic antidepressants or lithium, must be assessed. Finally, many patients who present to a psychiatrist have had inadequate medical care and should be routinely examined to assess their general level of physical health. This is especially true for patients with chronic mental illness or substance abuse. In some settings, such as emergency rooms and inpatient wards, the psychiatrist may want to perform the physical examination; in others, it may be more appropri-ate to refer the patient to a general practitioner for this purpose. Genital, rectal and breast examinations can usually be included even for anxious and paranoid patients, but when they must be postponed, care should be taken to complete them at a later time. A same-sex chaperone is necessary for the security of both the patient and the examiner

Certain aspects of the information obtained in the psy-chiatric interview should alert the psychiatrist to the need for a physical examination. Any indication (Table 19.7) from the his-tory that the psychiatric symptoms followed physical trauma, in-fection, medical illness, or drug ingestion should prompt a full physical examination. Similarly, the acute onset of psychiatric symptoms in a previously psychiatrically healthy individual, as well as symptoms arising at an unusual age, should raise ques-tions about potential medical causes (Table 19.8).

New-onset psychosis or mania in a previously healthy 65-year-old is representative of a case requiring pursuit of a medical condition as the cause because these disorders do not commonly present at this age. Any gross physical abnormalities, such as gait disturbances, skin lesions, eye movement abnormalities, lacera-tions, flushed skin, or drooling, should raise the interviewer’s 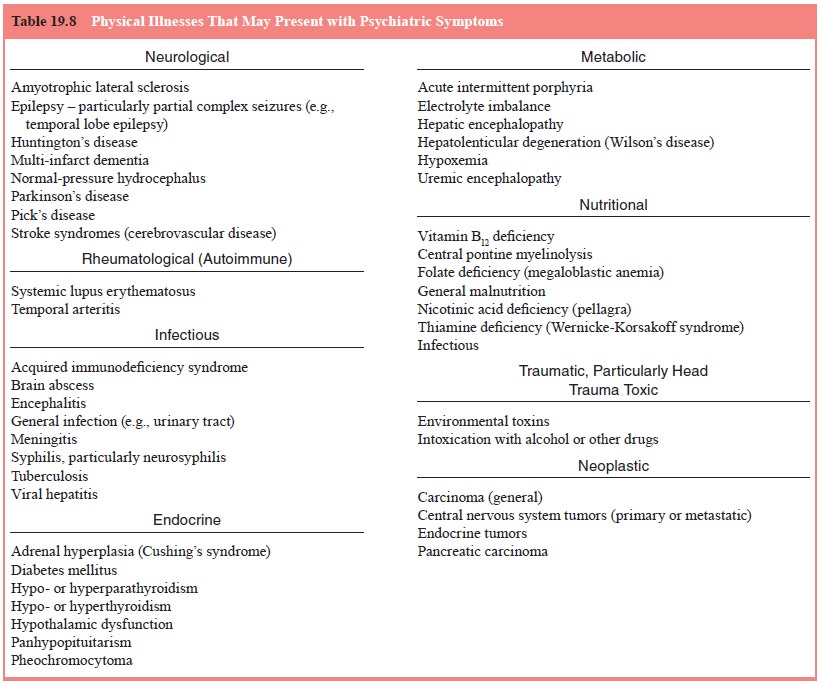 suspicion that there might be an underlying medical condition. Urinary or fecal incontinence is also highly suggestive of a medi-cal etiology. Stigmata of drug or alcohol use or abuse, such as di-lated or pinpoint pupils, track marks, evidence of skin popping, or frank evidence of intoxication (e.g., alcohol on the breath) should also signal the need for a more thorough physical examination. Abnormalities of speech, such as impaired fluency or dysarthria, may indicate the presence of an underlying medical disturbance. Many mood problems may be caused by physical disorders, and even apparently healthy patients with dysthymia may have hy-pothyroidism that can be treated medically. Finally, any cognitive disturbances, such as disorientation, fluctuating level of alert-ness, inattentiveness, or memory problems are, until proved oth-erwise, evidence of a physical problem that is causing psychiatric symptoms. In such situations, careful attention should be paid to the patient’s vital signs, neurological examination (See section on Neurological Examination), and any indications of infection. In a hospital setting, a physical examination, including a careful as-sessment of the patient’s vital signs (including orthostatic meas-urements), cardiovascular status and pulmonary status precedes the prescription of most psychiatric medications. Psychiatrists should pay particular attention to a patient’s cardiovascular status (e.g., electrocardiographic abnormalities, orthostatic hy-potension, decreased cardiac ejection fraction) before beginning tricyclic antidepressants, which may induce cardiac conduction disturbances and thus must be used with caution for patients with such cardiac abnormalities as arrhythmias or other con-duction abnormalities. Patients taking medications such as low-potency neuroleptics, monoamine oxidase inhibitors and tricyclic antidepressants should be assessed for orthostatic hypotension, especially if they are elderly. If beta-blockers such as propranolol are being considered, patients should be evaluated for the pres-ence of asthma, which may be exacerbated by these drugs.

Physical examination may also be warranted during treat-ment with medication if physical symptoms arise. For example, fever and a change of mental status during a course of neurolep-tics require a full physical and neurological examination to rule out neuroleptic malignant syndrome. Urinary retention induced by medications with anticholinergic side effects requires an abdominal examination to assess bladder fullness. Anticholin-ergic-induced constipation may warrant abdominal or rectal examination to assess for impaction. When patients are seen in office-based practices, the psychiatrist most often obtains a care-ful medical history and may complete simple procedures such as blood pressure checks but may refer the patient to another physi-cian for a complete physical examination.