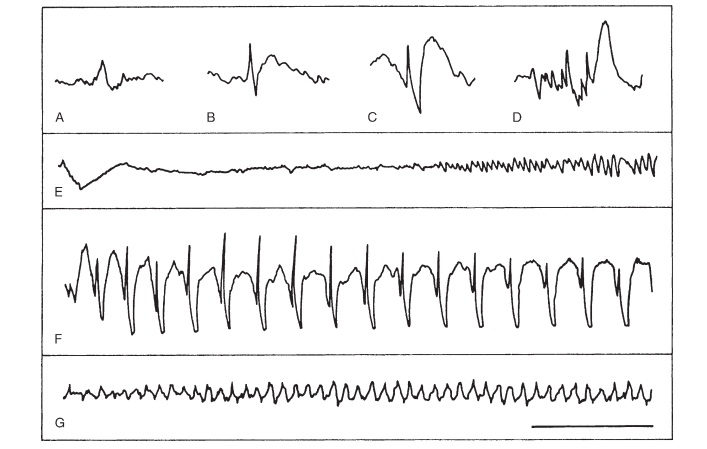 A variety of laboratory tests can aid in the clinical evaluation of the psychiatric patient.

A variety of laboratory tests can aid in the clinical evaluation of the psychiatric patient (Table 19.13). (Councilon Scientific Affairs, 1987; Gold and Dackis, 1986). 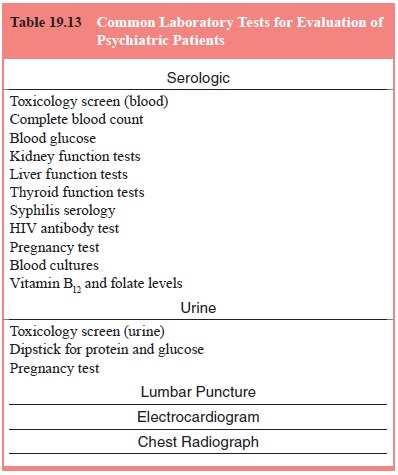 Blood tests are particularly helpful in ruling out medical causes of psychiatric symptoms.

When the clinician suspects that the ingestion of a substance has caused the presenting symptoms, a urine toxicology screen and blood alcohol level determination (Table 19.14) are indicated. (It is important to remember that an alcohol level of zero may indi-cate that the symptoms are due to a withdrawal syndrome and thus does not rule out alcohol as an inciting factor.) If the patient is known to be taking certain psychiatric medications, such as lithium, tricyclic antidepressants and anticonvulsants, levels of these medications should be tested as toxic levels may cause a variety of psychiatric symptoms. 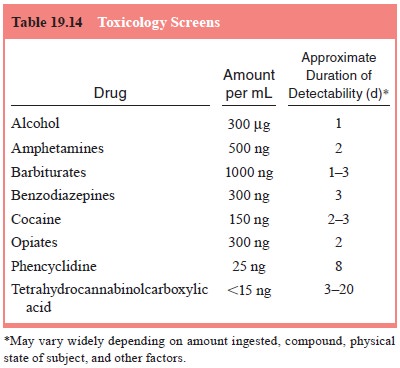 The complete blood count is part of the general laboratory eval-uation of a new patient. It is used to screen for multiple prob-lems, most commonly infections and anemia. In cases in which alcoholism is suspected or the mean corpuscular volume indi-cates a macrocytic anemia, vitamin B12 and folate levels should be tested. Vitamin B12 deficiency may lead to combined system disease, which can present with psychiatric symptoms such as irritability and forgetfulness in the early stages and dementia or frank psychosis in the later stages. The complete blood count is routinely used to monitor white blood cell counts in patients taking clozapine. Additional emergency complete blood counts may be necessary if such a patient develops fever, malaise, or other symptoms of infection. Certain mood stabilizers, such as carbamazepine and divalproex sodium, can induce a variety of blood dyscrasias.

The blood glucose test is an inexpensive, essential test in the evaluation of patients with a new onset of central nervous system dysfunction, psychosis, affective disorders and anxiety disor-ders. Hypoglycemia may produce lethargy and vegetative symp-toms that may mimic those of depression, and hyperglycemia may produce anxiety and delirium. This test is clearly indicated for known diabetics who present with the first onset of psychiat-ric symptoms. The atypical antipsychotic olanzapine can elevate blood sugar.

These tests, which check for levels of various enzymes in the liver, are indicated when there is some suspicion that liver disease is present. They help the clinician to screen for hepati-tis, alcoholism and biliary tract disease. They include creatine kinase, which is often elevated in neuroleptic malignant syn-drome as well as in other conditions in which muscle rigidity is prominent. Monitoring of liver function tests is essential with some psychotropic medications such as divalproex sodium and nefazodone.

These tests should be done for any patient with new-onset psy-chosis. They have become particularly important with the in-creasing incidence of syphilitic infection associated with the HIV epidemic. Positive serologic results in the presence of unex-plained psychiatric symptoms necessitate a lumbar puncture to test for neurosyphilis.

Blood cultures are indicated in the evaluation of medically ill pa-tients who develop fever and psychiatric symptoms such as con-fusion, disorientation and agitation because this delirium may be secondary to sepsis.

Psychiatric patients who present with known risk factors for HIV infection, including injection drug use and unsafe sexual prac-tices (see Table 19.5), should be approached for consent to HItesting, especially in geographic areas with high numbers of re-ported cases of acquired immunodeficiency syndrome. This also applies to patients who present with multiple sexually transmitted diseases or tuberculosis. HIV should always be suspected in cases of unexplained central nervous system dysfunction and when psychiatric illness is accompanied by suggestive medical find-ings such as thrush or swollen lymph nodes. HIV testing requires consent of the patient and should be preceded and followed by counseling. 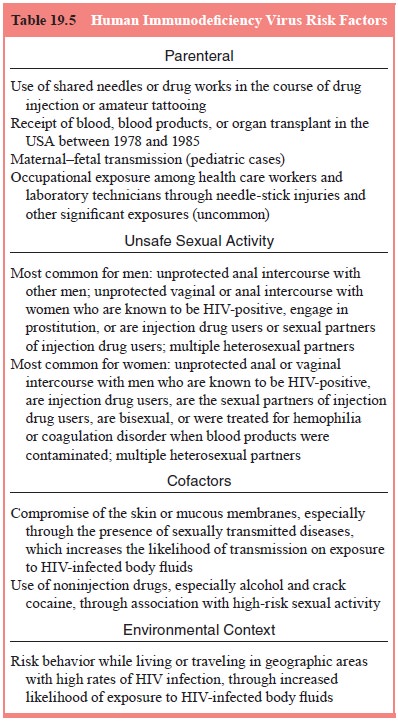 The serologic test for the presence of human chorionic gonado-tropin b-subunit may assist in ruling out pregnancy before the initiation of therapy with lithium, benzodiazepines, or other medications associated with fetal malformations. It is advisable to perform pregnancy testing for all women of childbearing age before initiating therapy with any psychotropic medication

Urine testing is indicated in two situations. Urine tests for preg-nancy are often indicated in the emergency room setting in which an immediate result is required before the initiation of drug ther-apy. Urinalysis may be indicated for geriatric patients with new onset of central nervous system dysfunction or psychosis because urinary tract infections may manifest themselves in this manner in the elderly.

Lumbar puncture may be indicated to test for infections, includ-ing meningitis, neurosyphilis, toxoplasmosis and cerebrospinal fluid tuberculosis. It is indicated in the evaluation of patients with symptoms such as confusion, disorientation, decreased alert-ness, or dementia when accompanied by fever (Table 19.15). It is also an important part of the evaluation of patients who have new-onset seizures or who are suspected of having neuroleptic malignant syndrome because these symptoms may be caused by central nervous system infections. In cases in which increased cerebrospinal fluid pressure is suspected, lumbar puncture should be preceded by computed tomographic (CT) scanning to evaluate for mass lesions. 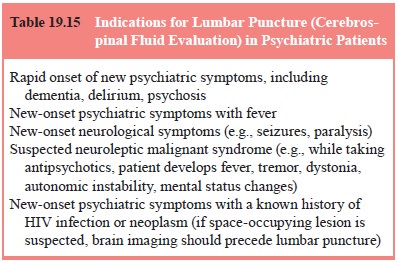 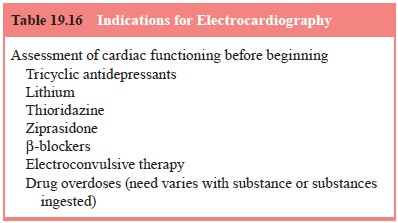 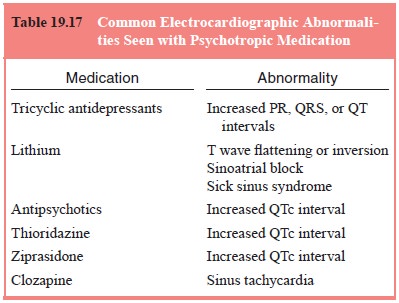 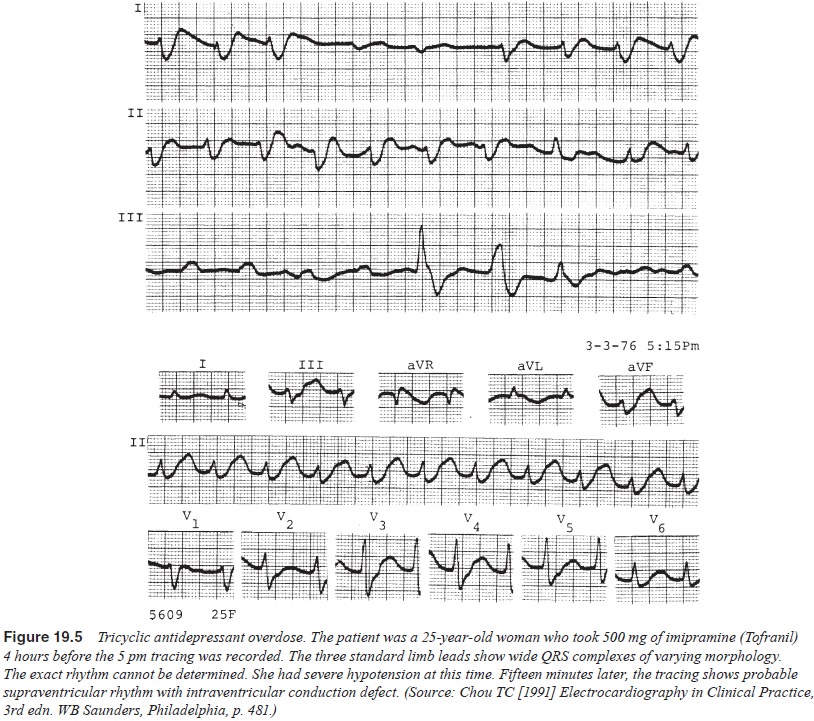 electrocardiographic tracing of a patient who took an overdose of tricyclic antidepressants is shown in Figure 19.5.

A history of brain injury or head trauma is an indication for an electroencephalogram (EEG) in the work-up of mental sta-tus changes or psychiatric symptoms. The patient with new-on-set psychosis should also have an EEG because partial complex seizures may produce psychosis. Symptoms suggesting tempo-ral lobe epilepsy (Figure 19.6), such as hyperreligiosity, hypo-sexuality and hypergraphia, also indicate that an EEG should be obtained, including nasopharyngeal leads, to best evaluate elec-trical activity in the temporal lobes. EEGs may be useful in the assessment of insomnia and other sleep disturbances.

Abrupt onset of psychiatric symptoms such as psychosis, mania, or personality change, or the presence of visual, olfactory and tactile hallucinations suggest central nervous system dysfunc-tion, which may warrant evaluation by electroencephalography. 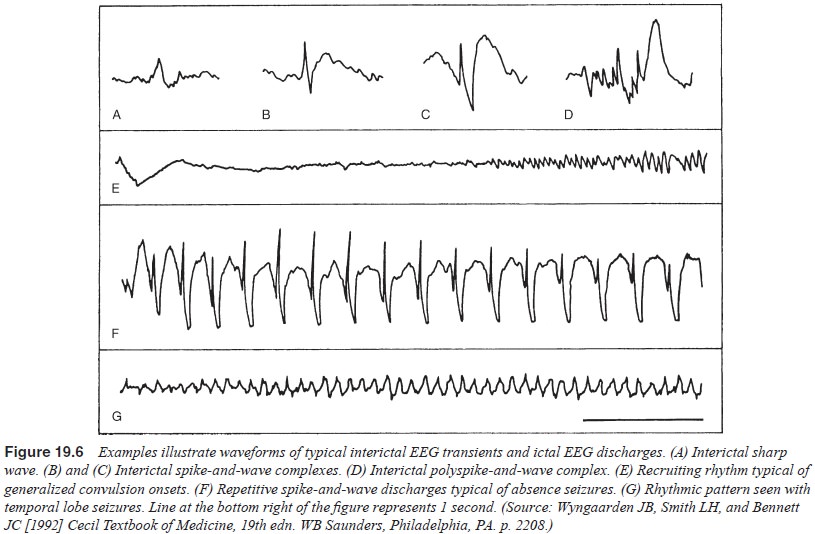