After cellulose, lignin is the second most abundant natural substance on earth. The basic components for lignin synthesis are p-coumaryl, sinapyl, and coniferyl alcohols, which are collectively termed monolignols (Fig. 18.7).

After cellulose, lignin is the second most abundant natural substance on earth. The basic components for lignin synthesis are p-coumaryl, sinapyl, and coniferyl alcohols, which are collectively termed monolignols (Fig. 18.7). Synthesis of the monolignols requires reduction of the carboxylic group of the corresponding acids to an alcohol. In the dis-cussion on the glyceraldehyde phosphate dehydrogenase reaction in sec-tion 6.3, it was shown that a carboxyl group can be reduced by NADPH to an aldehyde only if it is activated via the formation of a thioester. For the reduction of p-coumaric acid by NADPH (Fig. 18.7) a similar activa-tion occurs. The required thioester is formed with CoA at the expense of ATP in a reaction analogous to fatty acid activation. The cleavage of the energy-rich thioester bond drives the reduction of the carboxylate to the aldehyde. In the subsequent reduction to an alco-hol, NADPH is again the reductant. The synthesis of sinapyl- and coniferyl alcohols from sinapic and ferulic acids follows the same principle, but there are specific enzymes involved. Alternatively, coniferyl and sinapyl alcohols can also be formed from p-coumaryl alcohol by hydroxylation followed by methylation (Fig. 18.4). 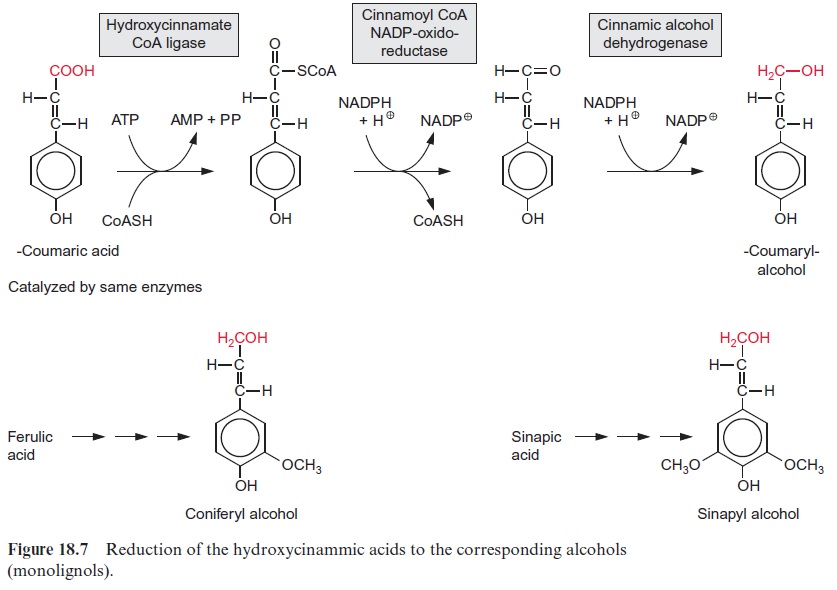 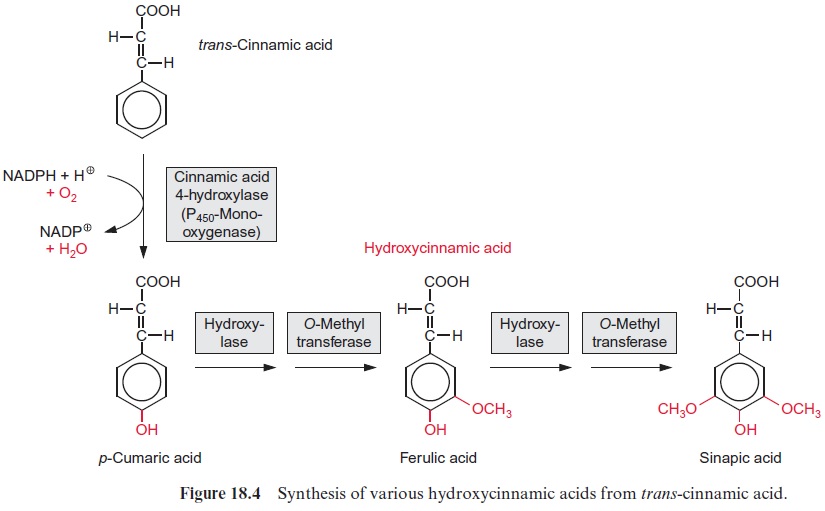 The dimerization of monolignols leads to the formation of lignans (Fig. 18.8). This takes place mostly by a reductive 8,8-linkage of the side chains, but sometimes also by a condensation of the two phenol rings. The mechanism of lignan synthesis is still not clear. Probably free radicals are involved. Plant lignans also occur as higher oligomers. In the plant world, lig-nans are widely distributed as defense substances. The lignan pinoresinol is a constituent of the resin of forsythia and is formed when the plant is wounded. Its toxicity to microorganisms is caused by an inhibition of cAMP phosphodi-esterase. Pinoresinol thus averts the regulatory action of cAMP, which acts as a messenger component in many organisms (whether also in plants is still undecided ). Malognol inhibits the growth of bacteria and fungi. 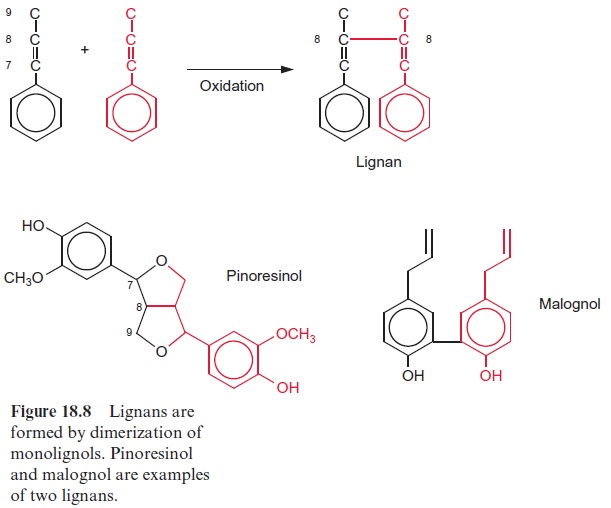 Some lignans have interesting pharmacological effects. Two examples may be used to illustrate this: podophyllotoxin, from Podophyllum, a mem-ber of the Berberidaceae family growing in America, is a mitosis toxin. Derivatives of podophyllotoxin are used to combat cancer. Arctigenin and tracheologin (from tropical climbing plants) have antiviral properties. Investigations are under way to try to utilize this property to cure AIDS.

Lignin is formed by radical polymerization of phenylpropanoid derivatives

Lignin is formed by polymerization of monolignols, in angiosperms prima-rily of sinapyl and coniferyl alcohol, and in gymnospermes mainly of con-iferyl alcohol. The synthesis of lignin takes place outside the cell, but the mechanism by which the monolignols are exported from the cell for lignin synthesis is still not known. There are indications that the monolignols are exported as glucosides that are hydrolyzed outside the cell by glucosidases, but this is still a matter of controversy. The mechanism of lignin formation also remains unclear. Both laccase and peroxidases probably play a role in the linkage of the monolignols. Laccase is a monophenol oxidase that oxi-dizes a phenol group to a radical and transfers hydrogen via an enzyme-bound Cu ion to molecular oxygen. The enzyme was given this name as it was first isolated from the lac tree (Rhus vermicifera), which grows in Japan. In the case of peroxidases, H2O2 functions as an oxidant, but the origin of the required H2O2 is not certain. As shown in Figure 18.9A, the oxidation of a phenol by H2O2 presumably results in the formation of a resonance-stabilized phenol radical. These phenol radicals can dimerize nonenzymatically and finally polymerize nonenzymatically (Fig. 18.9B). Due to the various resonance structures, many combinations are possible in the polymer. Monolignols react to form several C-C or C-O-C linkages, building a highly branched phenylpropanoid polymer. Free hydroxyl groups are present in only a few side chains of lignin and sometimes are oxidized to aldehyde and carboxyl groups. 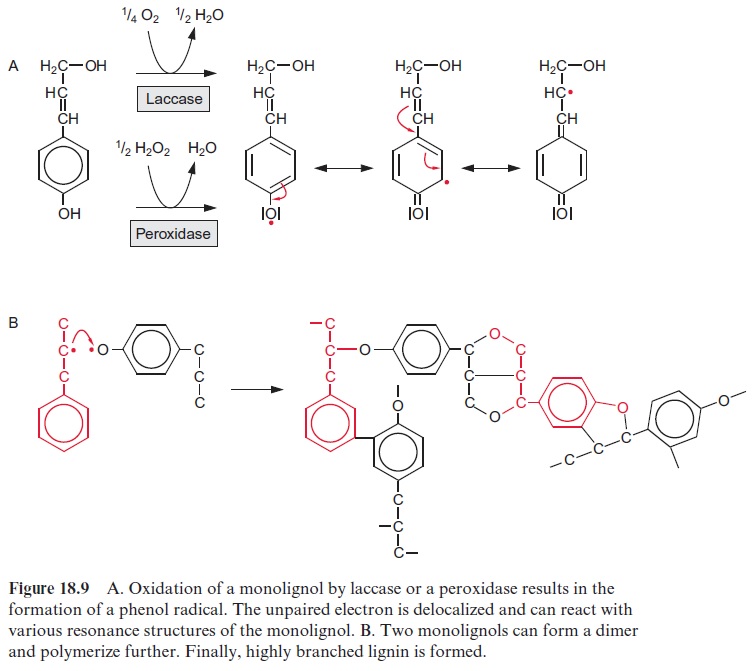 Although until now the primary structure of lignins has not been fully established in all its details, it is recognized that even in a single cell lignins of different structureare deposited in discrete sections of the cell wall. It has been postulated that certain extracellular glycoproteins, termed dirigent proteins, control the polymerization of monolignol radicals in such a way that defined lignin structures are formed. It is still a matter of debate to what extent lignin is formed by chance and formed specifically through the action of dirigent proteins.

The composition of lignin varies greatly in different plants. Lignin of conifers, for instance, has a high coniferyl content, whereas the coumaryl moiety prevails in the straw of cereals. Lignin is covalently bound to cellu-lose in the cell walls. Lignified cell walls have been compared with reinforced concrete, in which the cellulose fibers are the steel and lignin is the concrete. In addition to giving mechanical strength to plant parts such as stems or twigs, or providing stability for the vascular tissues of the xylem, lignin has a function in defense. Its mechanical strength and chemical composi-tion make plant tissues difficult for herbivores to digest. In addition, lignin inhibits the growth of pathogenic microorganisms. Lignin is synthesized in many plants in response to wounding. Only a few bacteria and fungi are able to cleave lignin. A special role in the degradation of lignin is played by woodrot fungi, which are involved in the rotting of tree trunks.

Often one-third of dry wood consists of lignin. For the production of cellulose and paper, this lignin has to be removed, which is very costly and the methods used ultimately contribute significantly to the pollution of riv-ers. Attempts are being made to reduce the content of lignin in wood by means of genetic engineering. Experiments have shown that it is possible to lower the lignin content of wood by antisense constructs that inhibit the expression of genes encoding lignin biosynthesis enzymes.

Suberin is a polymeric compound formed from phenylpropanoids, long chain fatty acids and fatty alcohols (C18–C30), as well as hydroxyfatty acids and dicarboxylic acids (C14–C20) (Fig. 18.10). In suberin, the phenylpro-panoids are to some extent linked with each other as in lignin. However, most of the 9’ -OH groups are not involved in these linkages and instead form esters with fatty acids. Often two phenylpropanoids are connected by dicarboxylic acids via ester linkages, and fatty acids and hydroxyfatty acids also can form esters with each other. Although the mechanism of suberin synthesis is to a large extent still not known, it appears that peroxidases are also involved in this process. 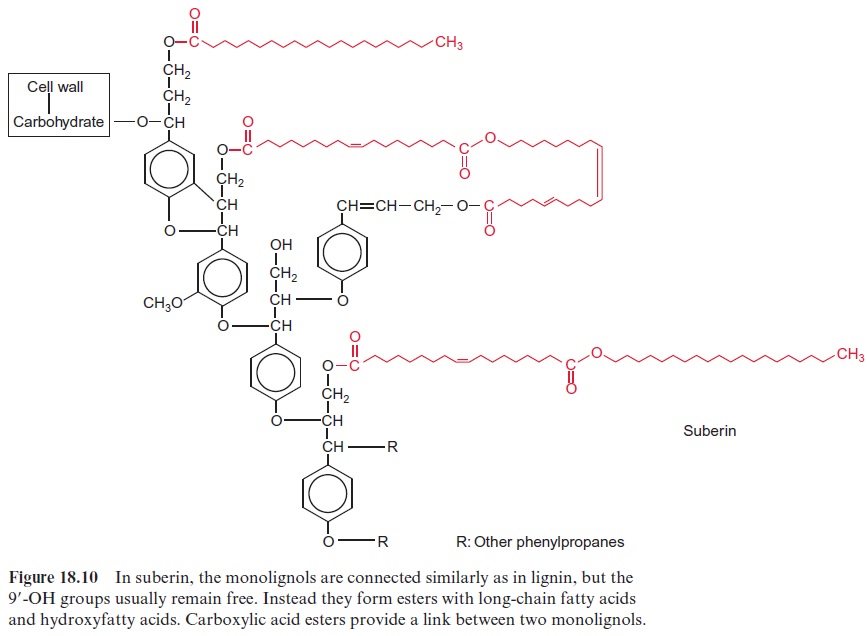 Suberin is a cell wall constituent that forms gas- and watertight lay-ers. It is part of the Casparian strip of the root endodermis, where it acts as a diffusion barrier between the apoplast of the root cortex and the central cylinder. Suberin is present in many C4 plants as an impermeable layer between the bundle sheath and mesophyll cells. Cork tissue, con-sisting of dead cells surrounded by alternating layers of suberin and wax, has a particularly high suberin content. Cork cells are found in a second-ary protective layer called the periderm and in the bark of trees. Cork lay-ers containing suberin protect plants against loss of water, infection by microorganisms, and heat exposure. Due to this, some plants even survive short fires and are able to continue growing afterwards.

Cutin is a gas- and water-impermeable constituent of the cuticle

The epidermis of leaves and shoots is surrounded by a gas- and water-impermeable cuticle . It consists of a cell wall that is impreg-nated with cutin and in addition is covered by a wax layer. Cutin is a polymer similar to suberin, but with a relatively small proportion of phe-nylpropanoids and dicarboxylic acids, mainly composed of esterified hydroxyfatty acids (C16–C18).