Hematopoietic growth factors act by binding to specific cell surface receptors. Activation of these receptors results in a cascade of intracellular second messengers and altered gene expression, which in turn induce cellular proliferation, differentiation, or activation. A HGF also may act indirectly by inducing the expression of a gene producing a different HGF or cytokine, which in turn stimulates another target cell. This indirect activity has made it difficult to delineate the pharmacologic activity of individual HGFs and accounts for some of the differences between in vitro and in vivo results. Cell culture studies can be designed to exclude indirect effects, but animal and clinical studies generally reflect the full scope of direct and indirect biologic effects.

As discussed earlier in this chapter, the hierarchy for hematopoiesis involves many steps and pathways. By definition, the pluripotent stem cell is the progenitor or precursor for all hematopoietic cells.

In addition to their effects on progenitor cells, HGFs bind to and regulate the functional activity of mature cells. Whereas lineage-specific growth factors (e.g., G-CSF and EPO) predominantly affect one cell lineage, multilineage growth factors (e.g., GM-CSF and IL-3) affect more than one cell lineage. This phenomenon is concentration dependent. The GM-CSF concentrations that regulate monocytes and granulocytes (5–20 pg/mL)are lower than those for eosinophils and platelets (20–2000 pg/mL) (Metcalf, 1990).

The in vivo activity of HGFs can be assessed by measuring endogenous concentrations under different conditions or by administering growth factors to animals or humans. Although the in vivo results are often consistent with those predicted by in vitro studies, differences can be observed and may be the result of interspecies variability. Other reasons for in vivo and in vitro variability include differences in clearance, pharmacokinetics, and glycosylation. Table 3 summarizes cellular sources, endogenous serum levels, and stimuli for release of growth factors. 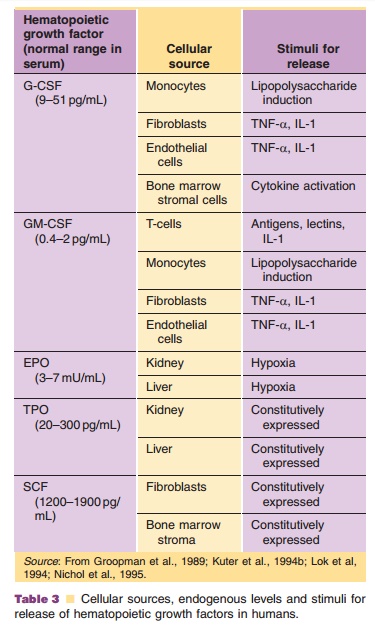 Cellular Sources and Stimuli for Release

T-lymphocytes, monocytes/macrophages, fibroblasts, and endothelial cells are the major cellular sources of most HGFs, excluding EPO, TPO, and darbepoetin alfa. EPO is produced primarily (> 90%) in the adult kidney (Jacobson et al., 2000). The liver also produces some EPO (< 10%), but the amount is insufficient to maintain normal red blood cell formation. TPO is produced in the liver and the kidney (Kuter, 1997).

Many inflammatory stimuli are capable of promoting the cellular release of HGFs (Table 3). Antigens, lectins, and IL-1 can signal T-lymphocytes to produce GM-CSF and IL-3. Endotoxins such as lipopolysaccharides can induce monocytes/macro-phages to release G-CSF and GM-CSF. IL-1 and tumor necrosis factor alpha (TNF-a), produced by activated monocytes, can trigger the release of G-CSF and GM-CSF by fibroblasts and endothelial cells. In addition, these findings suggest that HGFs play a major role in host response to infection or antigen challenge and may also play a limited role in maintaining normal hematopoiesis (Groopman et al., 1989; Hartung et al., 1999).

Physiologic Role of G-CSF and GM-CSF

G-CSF, but not GM-CSF, is usually detectable in the blood and increases during infection (Cebon et al., 1994). Mice that lack endogenous G-CSF (i.e., “knock-out mice”) have chronic neutropenia and impaired neutrophil mobilization (Lieschke et al., 1994). The collective results of these in vivo studies, together with in vitro observations, suggest that the two myeloid growth factors have complementary roles. G-CSF may help maintain neutrophil production during steady-state conditions and increase produc-tion during acute situations such as infection. GM-CSF may be a locally active growth factor that remains at the site of infection to localize and activate neutrophils (Rapoport et al., 1992).

In vivo definition of the physiologic role of GM-CSF in steady-state hematopoiesis has been further elucidated by a knockout mouse model (Stanley et al., 1994). Both survival and fertility of GM–/– mice were found to be normal. The peripheral blood of 6- to 7-week old GM–/– mice showed no significant difference from wild-type (normal) mice in terms of hemoglobin, platelets, total white blood cells, neutrophils, lymphocytes, monocytes, or eosinophils. No other differences were noted in bone marrow cellularity, myeloid:erythroid ratios of marrow, or assayed progenitor cells from different lineages. These data suggest that steady-state hematopoietic pathways that might be affected by loss of GM-CSF are redundantly regulated. The most striking finding in the GM-CSF–/– mice was the development of pulmonary disease. At birth, knockout and wild-type mice have similar lung morphology, but by 3 weeks, knockout mice con-sistently showed focal peribronchovascularlymphoid aggregate. Older animals had alveoli with large foamy macrophages. The changes were histo-logically similar to those produced by pulmonary alveolar proteinosis. These changes were not seen in the wild-type animals.

EPO increases red blood cell count by causing committed erythroid progenitor cells to proliferate and differentiate into normoblasts (a nucleated pre-cursor cell in the erythropoietic lineage). EPO also shifts reticulocytes (mature red blood cells) from the bone marrow into the peripheral circulation. EPO is ordinarily present in plasma in low, but detectable, quantities. Unlike some other HGFs, EPO release is not mediated by inflammatory stimuli. Tissue hypoxia resulting from anemia induces the kidney to increase its production of EPO by a magnitude of a hundred-fold or more. Patients with chronic renal failure are unable to produce adequate EPO levels because of the loss of renal function (Erslev, 1991).

rhEPO accelerates erythropoiesis in patients with chronic renal failure and has been used to enhance red cell production after chemotherapy and allogeneic bone marrow transplantation, and to increase red blood cell numbers for presurgical autodonation. Although rhEPO is a late-acting factor, it may synergize with TPO s to stimulate the production of megakaryocyte colony-forming cells (Broudy et al., 1997).

SCF is an early acting HGF that stimulates the proliferation of primitive hematopoietic and non-hematopoietic cells. In vitro, SCF alone has minimal colony-stimulating activity on hematopoietic progeni-tor cells; however, it synergistically increases colony-forming or stimulatory activity of other HGFs, including G-CSF, GM-CSF, EPO, MGDF, and IL-2. SCF is produced by bone marrow stroma and has an important role in steady-state hematopoiesis. Unlike most HGFs, SCF circulates in relatively high concen-trations in normal human plasma (Langley et al., 1993). The generation of dendritic cells from CD34þ cells is enhanced 2.5-fold by the addition of SCF to the culture cocktail, and is enhanced fivefold if SCF and fit-3 ligand are added (Siena et al., 1997).

TPO/MGDF are HGFs that stimulate the production of megakaryocyte precursors, megakaryocytes, and platelets. Endogenous TPO is produced by the liver and enters the peripheral circulation. It eventually reaches the bone marrow and stimulates bone marrow megakaryocytes to produce platelets (Kuter, 1997). Platelet production is subject to a homeostatic regulation, similar to that observed for EPO.

IL-11 has pleiotropic effects on multiple tissues. In terms of thrombopoiesis, IL-11 works synergistically with IL-3, TPO, MGDF, or SCF to stimulate various stages of megakaryocytopoiesis and thrombopoiesis (Du and Williams, 1997). It is possible that IL-11’s effects on platelet formation are mediated in part by TPO.