Properties such as atomic radius, ionic radius, ionisation energy, electronegativity, electron affinity, show a regular periodicity and hence they are called periodic properties. The main significance of the modern periodic table is that it gives a clear understanding of the general properties and trends within a group or a period to predict with considerable accuracy, the properties of any element, even though that element may be unfamiliar to us. Let us discuss the periodic trend of some of the properties.

Atomic radius of an atom is defined as the distance between the centre of its nucleus and the outermost shell containing the valence electron. Direct measurement of the radius of an isolated atom is not possible. Except for noble gases, usually the atomic radius is referred to as covalent radius or metallic radius depending on the nature of the bonding between the concerned atoms.Atomic radius in metal atoms is known as metallic radius.It is defined as half the distance between the nuclei of adjacent metal atoms (Figure 8.2 (a)). 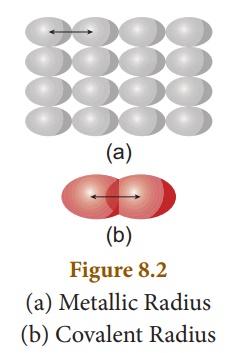 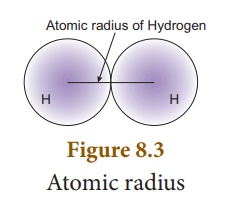 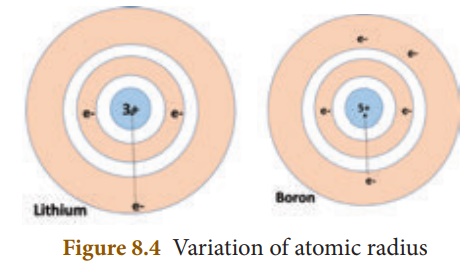 It is defined as the distance from the centre of the nucleus of the ion upto the point where it exerts its influence on the electron cloud of the ion. 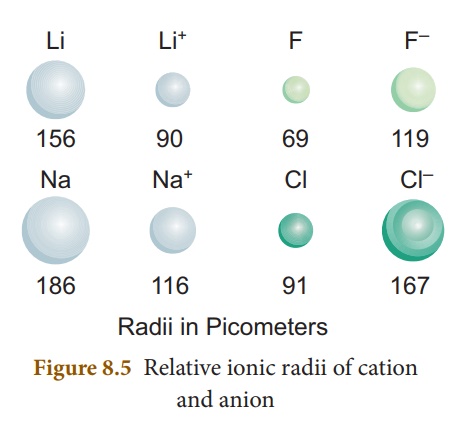 For instance, lithium and sodium lose the single electron from their outermost energy level to form cations. The ions so formed are smaller because the remaining electrons are at a inner cells and attracted more strongly by the nucleus. Fluorine and chlorine become negative ions by gaining an electron. When electrons are added, the charge on the nucleus is not great enough to hold the increased number of electrons as closely as it holds the electrons in the neutral atom. So, as seen in atomic radius, ionic radii also decrease along the period from left to right and increase down the group.

Ionisation energy is the minimum energy required to remove an electron from a gaseous atom in its ground state to form a cation. It is otherwise called ionisation enthalpy. It is measured in kJ/mol. Higher the ionisation energy, it is more difficult to remove the electron.

As the atomic size decreases from left to right in a period, more energy is required to remove the electrons. So, the ionisation energy increases along the period. But, down the group, the atomic size increases and hence the valence electrons are loosely bound. They require relatively less energy for the removal. Thus, ionisation energy decreases down the group in the periodic table.

Note: As the positive charge increases the size of the cation decreases

As the negative charge increases the size of the anion increases

Electron affinity is the amount of energy released when a gaseous atom gains an electron to form its anion. It is also measured in kJ/mol and represented by the following equation:

Like ionisation energy, electron affinity also increases from left to right in a period and decreases from top to bottom in a group.

Electronegativity of an element is the measure of the tendency of its atom to attract the shared pair of electrons towards itself in a covalent bond. Let us consider HCl molecule. Both the hydrogen and chlorine atoms share one electron each to form the covalent bond between them. chlorine atom has a higher electronegativity and hence it pulls the shared electrons towards itself more strongly than hydrogen. Thus, when the bond breaks, the bonding electrons are left with chlorine forming H+ and Cl– ions. It is represented, diagrammatically, as shown below: 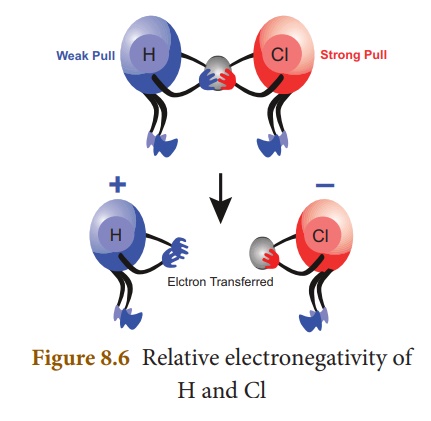 Electronegativity is based on various experimental data such as bond energy, ionization potential, electron affinity, etc.

Pauling scale is the widely used scale to determine the electronegativity, which in turn predicts the nature of bonding (ionic or covalent) between the atoms in a molecule.

Electronegativity of some of the elements are given below

If the difference in electronegativity between two elements is 1.7, the bond has 50% ionic character and 50% covalent character.

If the difference is less than 1.7, the bond is considered to be covalent.

If the difference is greater than 1.7, the bond is considered to be ionic. 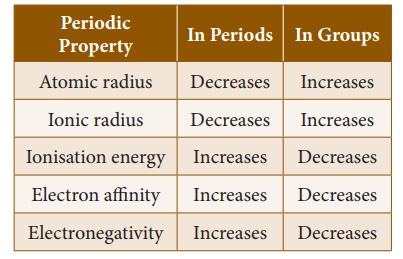