Iron is the second most abundant metal available next to aluminium. It occurs in nature as oxides, sulphides and carbonates.

Iron is the second most abundant metal available next to aluminium. It occurs in nature as oxides, sulphides and carbonates. The ores of iron are as follows:

i. Concentration by Gravity Separation: The powdered ore is washed with a steam of water. As a result, the lighter sand particles and other impurities are washed away and the heavier ore particles settle down.

ii. Roasting and Calcination: The concentrated ore is strongly heated in a limited supply of air in a reverberatory furnace. As a result, moisture is driven out and sulphur, arsenic and phosphorus impurities are oxidized off.

iii. Smelting (in a Blast Furnace): The charge consisting of roasted ore, coke and limestone in the ratio 8:4:1 is smelted in a blast furnace by introducing it through the cup and cone arrangement at the top. There are three important regions in the furnace. 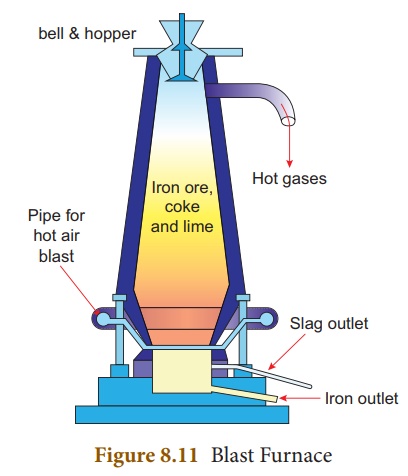 (a) The Lower Region (Combustion Zone)-The temperature is at 1500°C. In this region, coke burns with oxygen to form CO2 when the charge comes in contact with a hot blast of air.

It is an exothermic reaction since heat is liberated.

(b) The Middle Region (Fusion Zone) – The temperature prevails at 1000°C. In this region, CO2 is reduced to CO.

These two reactions are endothermic due to absorption of heat. Calcium oxide combines with silica to form calcium silicate slag.

The molten iron is collected at the bottom of the furnace after removing the slag.

The iron thus formed is called pig iron. It is remelted and cast into different moulds. This iron is called cast iron.

i. Reaction with air or oxygen: Only on heating in air, iron forms magnetic oxide.

ii. Reaction with moist air: When iron is exposed to moist air, it forms a layer of brown hydrated ferric oxide on its surface. This compound is known as rust and the phenomenon of formation of rust is known as rusting.

iii. Reaction with steam: When steam is passed over red hot iron, magnetic oxide is formed.

With dilute HNO3 in cold condition it gives ferrous nitrate.

When iron is dipped in con. HNO3 it becomes chemically passive or inert due to the formation of a layer of iron oxide (Fe3O4) on its surface.

Pig iron (Iron with 2-4.5% of carbon): It is used in making pipes, stoves, radiators, railings, manhole covers and drain pipes.

Steel (Iron with < 0.25% of carbon): It is used in the construction of buildings, machinery, transmission cables and T.V towers and in making alloys.

Wrought iron (Iron with 0.25-2% of wraught carbon): It is used in making springs, anchors and electromagnets.