Metallurgy is a science of extracting metals from their ores and modifying the metals into alloys for various uses, based on their physical and chemical properties and their structural arrangement of atoms.

Human life is associated with various metals. We use metals in our day to day activities. It is the utmost need to have some metals like sodium, potassium, calcium, iron, etc. in the human body. Deficiency of these metals affects the metabolic activities thereby causing diseases. So, metals play a vital role in our life. In this section, let us discuss how metals are obtained from various sources by the process of metallurgy.

Metallurgy is a science of extracting metals from their ores and modifying the metals into alloys for various uses, based on their physical and chemical properties and their structural arrangement of atoms. A metallurgical process involve three main steps as follows:

(i) Concentration or Separation of the ore: It is the process of removal of impuries from the ore.

(ii) Production of the metal: It is the convertion of the ore into metal.

Minerals: A mineral may be a single compound or a complex mixture of various compounds of metals found in the Earth.

Ore: The mineral from which a metal can be readily and economically extracted on a large scale is said to be an ore.

For example: Clay (Al2O 3. 2 SiO 2. 2 H2O) and bauxite (Al2O3 .2 H2O) are the two minerals of aluminium, but aluminium can be profitably extracted only from bauxite. Hence, bauxite is an ore of aluminium and clay is its mineral.

Mining: The process of extracting the ores from the Earth's crust is called mining.

Gangue or Matrix: The rocky impurity associated with an ore is called gangue or matrix.

Flux: It is the substance added to the ore to reduce the fusion temperature and to remove the impurities. E.g. Calcium oxide (basic), Silica (acidic). If the gangue is acidic, then basic flux is added and vice versa.

Slag: It is the fusible product formed when a flux reacts with a gangue during the extraction of metals.

Smelting: Smelting is the process of reducing the roasted metallic oxide from the metal in its molten condition. In this process, impurities are removed as slag by the addition of flux.

2. Types of separation or concentration of an ore

There are four major types of separation of ores based on the nature of the ore. The different kinds of ores of metals are given in Table 8.1

Concentration of the crushed ore is done mainly by the following methods: -

The difference in the densities or specific gravities of the ore and the gangue is the main principle behind this method. Oxide ores are purified by this method. e.g., Haematite Fe2O3 the ore of iron.

The ore is poured over a sloping,vibrating corrugated table with grooves and a jet of water is allowed to flow over it. The denser ore particles settle down in the grooves and lighter gangue particles are washed down by water.

The magnetic properties of the ores form the basis of separation. When either the ore or the gangue is magnetic, this method is employed. e.g., Tinstone SnO2, the ore of tin. 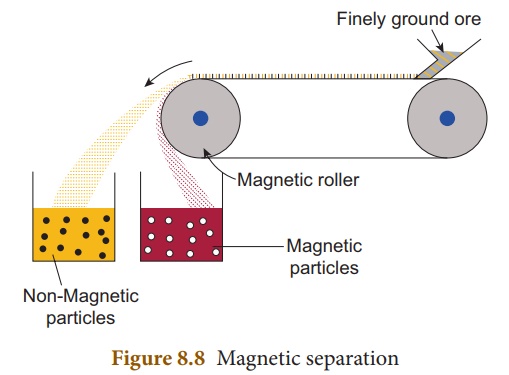 This process depends on the preferential wettability of the ore with oil (pine oil) and the gangue particles by water. Lighter ores, such as sulphide ores, are concentrated by this method. e.g., Zinc blende (ZnS). 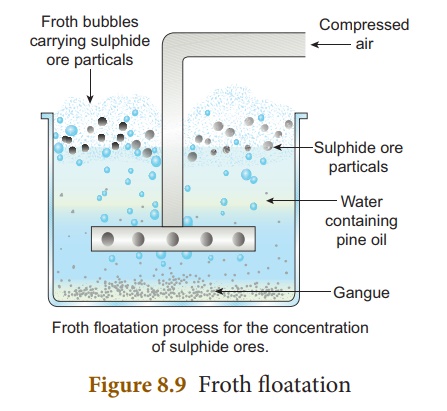 The crushed ore is taken in a large tank containing oil and water and agitated with a current of compressed air. The ore is wetted by the oil and gets separated from the gangue in the form of froth. Since the ore is lighter, it comes on the surface with the froth and the impurities are left behind. e.g., Zinc blende (ZnS).

This method is employed when the ore is in a very pure form.

Extraction of metal from metal oxide can be categorized into three types.