These can be hard to separate on clinical grounds and only the two most important, pemphigoid and dermatitis herpetiformis, are described in detail here. Several others are mentioned briefly.

Pemphigoid is an autoimmune disease. Serum from about 70% of patients contains antibodies that bind in vitro to normal skin at the basement membrane zone.

However, their titre does not correlate with clinical disease activity. The IgG antibodies bind to two main antigens: most commonly to BP230 (within the cel-lular part of the hemidesmosome), and less often to BP180 (a transmembrane molecule with one end within the hemidesmosome and the other bound to the lamina lucida). Complement is then activated, an inflammatory cascade starts and mast cells degranulate, liberating a variety of inflammatory mediators. 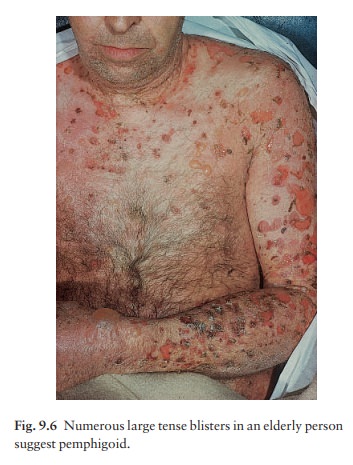 Pemphigoid is a chronic, usually itchy, blistering dis-ease, mainly affecting the elderly. The tense bullae can arise from normal skin but usually do so from urticarial plaques (Fig. 9.6). The flexures are often affected; the mucous membranes usually are not. The Nikolsky test is negative

Pemphigoid is usually self-limiting and treatment can often be stopped after 1–2 years.

Untreated, the disease causes much discomfort and loss of fluid from ruptured bullae. Systemic steroids and immunosuppressive agents carry their usual com-plications if used long-term. The validity of a possible association with internal malignancy is still debated. 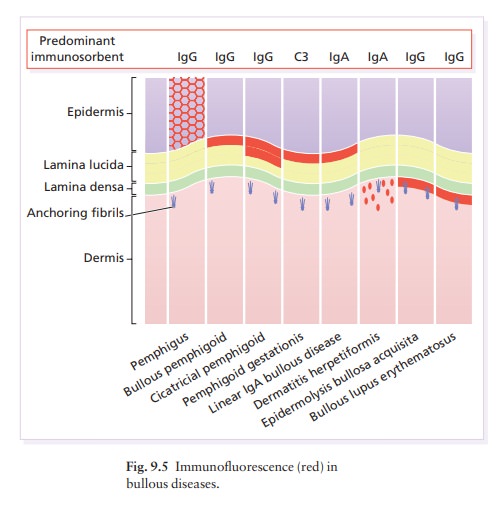 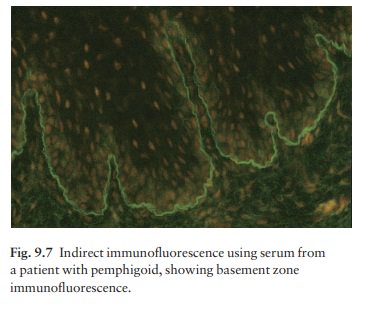 In the acute phase, prednisolone or prednisone  at a dosage of 40 – 60 mg/day is usually needed to control the eruption. Immuno-suppressive agents may also be required. The dosage is reduced as soon as possible, and patients end up on a low maintenance regimen of systemic steroids, taken on alternate days until treatment is stopped. For unknown reasons, tetracyclines and niacinamide help some patients.