Injuries caused by missiles entering live tissue are directly related to the amount of kinetic energy transferred from the missile to the target tissue.

Injuries caused by missiles entering live tissue are directly related to the amount of kinetic energy transferred from the missile to the target tissue. This energy is expressed by the equation Ek = ‰ mv2, where the exponential factor of velocity represents the greatest contribution to energy transferred. The mass is also of importance. Therefore, the damage caused by a bullet is determined not only by the velocity, but also by tissue resistance (the greatest amount of energy is transferred at the point where tissue resistance is maximal), the yaw (angle of the bullet in relation to its trajectory path), the bullet's tumble effect after it hits the target tissue, the bullet weight, and the extent of bullet fragmentation.

In shotgun injuries, especially those inflicted at close range, the total mass of the individual projectiles is a very important factor in the kinetic energy equation. At close range the pellets act as a solitary missile because of tight clustering, and their total weight is much greater than that of individual rifle or handgun bullets. Furthermore, the ballistically poor design of multiple small, round balls does not favour maintenance of high kinetic energy at considerable distances from the muzzle, nor does it permit great tissue penetration. However, at close ranges (ie up to about 3 m in the case of shotguns) the energy release generally causes massive tissue disruption close to the point of penetration. For this reason close-range shotgun injuries have many of the characteristics of high-velocity missile war wounds. 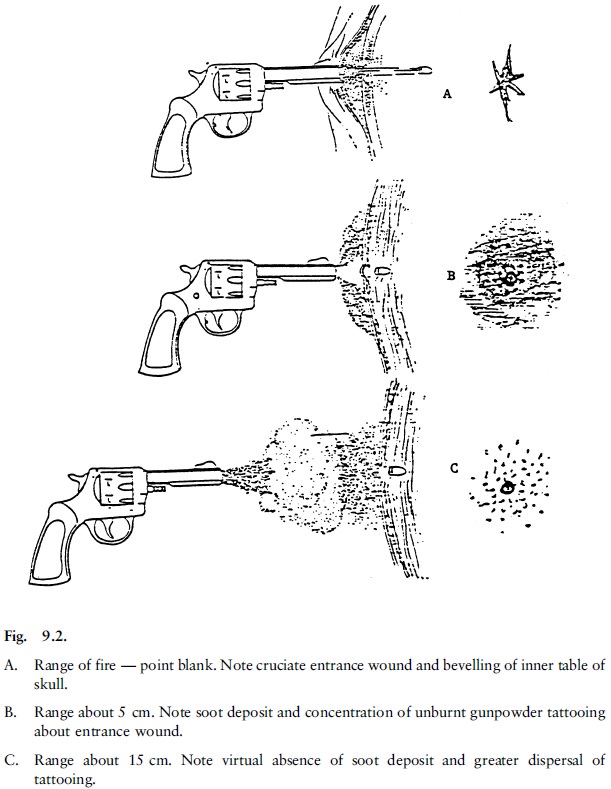 When a missile enters tissue a temporary pulsing cavity, in which the tissues undulate and stretch and compress, is formed along the missile tract within 10 to 30 milliseconds after impact. This cavity can be as large as 30 to 40 times the diameter of the bullet. This phenomenon, that has been seen in muscle, liver, bone, brain, lungs, and arteries, is caused by energy released by the missile, forming shock waves with pressures of up to 100 to 200 atmospheres directly related to missile velocity, and imparting momentum to the tissues, both forward and laterally. In addition there is mechanical damage due to the shearing effect between tissues of differing heterogeneity and density. The actual cavity created by the missile rapidly collapses behind the projectile as a result of tissue elasticity, haemorrhage and oedema, leaving a smaller permanent pathway usually marked by tissue loss, haemorrhage, bullet fragments or sometimes bone fragments which can be seen during radiological examination shortly after injury. Bullet fragmentation is a major cause of tissue disruption and there is a close connection between large exit wounds and bullet fragmentation.

The critical velocity at which bone is fractured is approximately 66 m/s. Kinetic energy imparted to the tissue causes bone to fracture. Although some bone fragments may be contained within the surrounding framework of the periosteum (bone membrane), muscle and connective tissue, others may have sufficient energy to act as secondary missiles, creating further destruction and multiple exit-wounds. The medical examiner may thus be faced with a discrepancy between the number of entrance and exit wounds.

In low-velocity gunshot wounds, defined as those inflicted by missiles travelling at a velocity of less than 360 m/s (ie most handguns), the energy transferred to the tissues is considerably less than that of high-velocity missiles, resulting in less tissue destruction. As an interesting rider: the Soviet AK-47 assault rifle, despite the high velocity (900 m/s at the muzzle) and marked tendency of its bullet to yaw after penetration, causes relatively non-dramatic wounds in the more elastic soft tissues (muscle, bowel wall, lung) because of its nonfragmenting behaviour, but multiple fractures and massive disruption in inelastic tissues such as bone and liver.