These are produced by a stretching force applied to the skin from its undersurface with perforation of the dermis and epidermis when their limits of elasticity are exceeded.

These are produced by a stretching force applied to the skin from its undersurface with perforation of the dermis and epidermis when their limits of elasticity are exceeded. The surface defects vary widely in shape and configuration and may be stellate, cruciate, round, elliptical, crescentic or linear cutaneous-lacerations. The greater the missile's velocity when it exits, the larger and more jagged the exit wound. Skin edges are often everted (inside-out) and shreds of contused (bruised), haemorrhagic subcutaneous fat may extrude through the defect. Characteristic features of dermal entrance wounds such as the marginal abrasion ring, soiling and burning, are absent from exit wounds, with the exception of those located over a part of the body which lies beneath or is pressed against a firm surface such as a leather belt, a wall or the ground. In these cases a marginal abrasion ring may surround the exit wound. 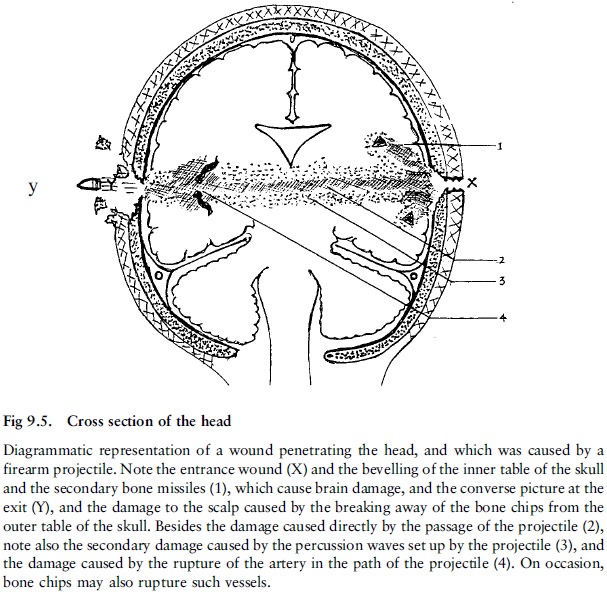 Exit wounds are usually larger than entrance wounds, provided the latter had not been affected by expanding explosion gases. Two factors, acting either individually or together, are usually responsible for the greater size of exit wounds. The first factor is tumbling of the missile, which increases the chances of it leaving the body with an oblique surface presented at the striking area. The missile is thus turned sideways, and does not move forward head first. The second factor is bullet deformation due to it striking some hard object such as bone, which causes consequent flattening of and an increase in missile diameter, a type of change especially common in soft-nosed and hollow-nosed projectiles.

When the examiner is confronted with a single entrance wound and multiple exits, the possibility of bullet and/or bone fragmentation should be considered. If the shot was fired from beyond the range at which tattooing would occur it can be difficult to differentiate between an entrance and exit wound. If the projectile passes through bone, and particularly the skull, the direction can be readily determined, since the entrance into the bone will be sharply cut and about the same diameter as the projectile. On the inner table the bone will exhibit a bevelling (sloping) effect and the defect in the bone will be generally larger than that at the entrance. The bone breaking away from the inner table will produce secondary missiles which may cause more extensive tissue damage than the missile itself. As the projectile leaves the skull the converse will apply, that is the wound on the outer table will be bevelled.

A patient was found to have a .22 bullet lodged in the occipital portion of his skull immediately below the entrance wound in the scalp. He died later that night. At post-mortem examination it was found that a small chip of bone from the inner table of the skull had pierced the dural venous sinus, which had given rise to a large subdural haemorrhage which, in turn had caused the victim's demise. The small bone fragment was missed upon initial examination of the X-ray plate.