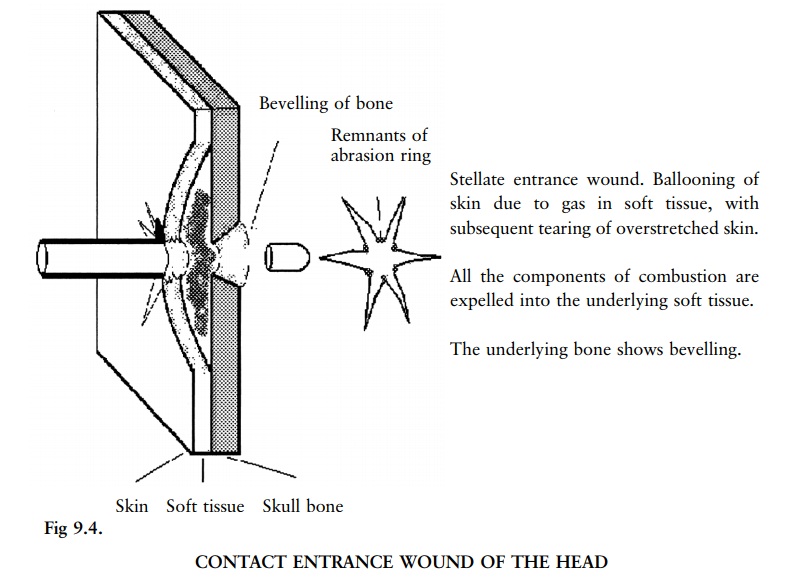 Entrance wounds are usually round or ovoid (oval) with an abrasion ring where the bullet abraded the skin during entrance. This abrasion ring is caused by the force exerted by the projectile at entry, when the outermost layers of the epidermis are stripped away. It is not caused by the rotational movement of the projectile, as it is sometimes described in the literature, but by the tangential force exerted on the skin. Similar abrasions are sometimes seen surrounding the exit wound when the skin is pressed against a hard object, for instance a belt buckle. After the bullet perforated the skin the elasticity of the cutaneous tissue restores the skin's previous elasticity and the skin defect contracts.

Entrance wound shape (ie round, oval, star-shaped or cross-shaped) and size must be described precisely. Cutaneous injury and its associated features, such as soiling and rim abrasion ring, should be accurately measured and the dimensions recorded. A circular wound requires only the diameter measure-ment, whereas an elliptical wound is measured across its widest and narrowest diameters and variations in width of the marginal abrasion are recorded. Peripheral fouling or stippling due to unburnt powder residues should be specifically noted.

Entrance wounds occasionally occur in unusual sites or are not easily seen. If the body is covered in blood, clots may obscure the injury. Similarly, scalp and pubic wounds are not easily seen, and in these cases shaving the hair before autopsy will reveal the injury. The possibility of wounds in concealed or unusual sites should always be borne in mind. Such sites comprise the external auditory meatus (opening), nostrils, umbilicus (navel), axillae (armpits), perineum (pelvic floor), vagina and rectum. Oral wounds are sometimes difficult to see as a bullet may have entered the open mouth, and after rigor mortis set in the mouth could not be opened.

Injuries which do not look like gunshot wounds can be difficult to interpret. This occurs for example when the missile passes through glass or if the bullet strikes the body after it has ricocheted. If the bullet then glances off the body without penetrating, only an abrasion or laceration may be produced.

A round penetrating defect similar to a bullet entrance wound can also be produced by an instrument such as a screwdriver, but in this case no missile will be found at the end of the track. Similar wounds can be produced if the victim was beaten with a nail-studded plank.

The definitive factor determining the appearance of a cutaneous entrance wound is the muzzle-to-skin distance, which accounts for the simple classification of entrance wounds as ``contact'', ``intermediate'' and ``distant''. However, estimates of the firing range cannot be made with accuracy unless the exact type of firearm is known, and even then only by ballistic experts, preferably after test shots were fired at varying distances under controlled conditions. 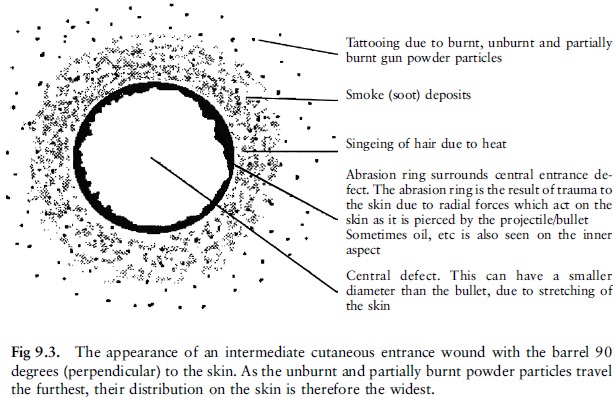 The margins of the skin perforation are charred by the flame coming from the muzzle, and the abraded border is usually soiled with powder residue which can also be clearly visible in the subcutaneous and deeper tissues. The surrounding abrasion ring is of uniform width, and around this there can be an additional abrasion ring from the gun barrel and gun sight. These muzzle imprints result from expansion of the subcutaneous tissue when gas is blown into the tissue, elevating the skin surface and pressing it tightly against the muzzle. The subcutaneous tissues in and immediately adjacent to the bullet track may have a cherry red colour due to localised carboxyhaemoglobin formation from carbon monoxide in the muzzle gases. If the muzzle is at an angle with the skin, the distribution is more elliptical.

Contact-range entrance wounds in the scalp look slightly different because stellate (star-shaped) lacerations radiate from the central defect (fig 9.4). This is due to expansion of the explosion gases between scalp and skull and within the cranial cavity. Explosion skull fractures may result, producing bone fragments which can act as secondary missiles.

Entrance gunshot wounds are classified as intermediary when muzzle-to-target distances are such that the target surface is still within range of the muzzle blast although target and muzzle are not in contact. Maximum muzzle-to-target distances at which flame and muzzle blast create dermal damage and soiling vary according to the type of gun and ammunition. Handguns and ammunition encountered in civilian homicides do not ordinarily deposit powder on the target at ranges greater than 50 to 75 cm. Close-range entrance wounds in unclothed areas may be surrounded by a radial arrangement of soot and be singed by flame. If the wound is in a hairy area, hair may be singed and examination with a hand lens may reveal clubbing of the hair ends due to melting of the keratin. 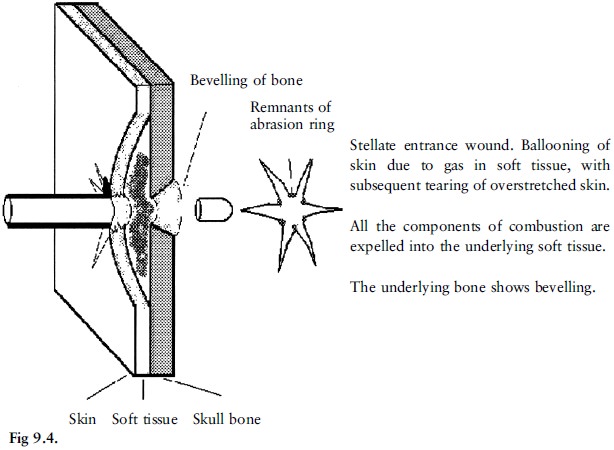 A distant wound may show a surrounding faint zone of ecchymotic discoloration due to subcutaneous bleeding. Only the defect where the bullet entered the skin, with a surrounding abrasion ring, is evident.