The major determinants of myocardial oxygen requirement are set forth in Table 12–1. The effect of arterial blood pressure is medi-ated through its effect on wall stress. As a consequence of its continuous activity, the heart’s oxygen needs are relatively high, and it extracts approximately 75% of the available oxygen even in the absence of stress. The myocardial oxygen requirement increases when there is an increase in heart rate, contractility, arterial pres-sure, or ventricular volume. These hemodynamic alterations fre-quently occur during physical exercise and sympathetic discharge, which often precipitate angina in patients with obstructive coro-nary artery disease. 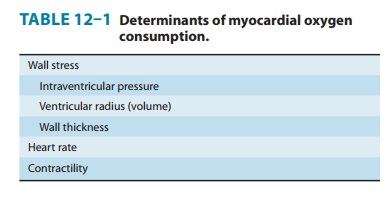 Drugs that reduce cardiac size, rate, or force reduce cardiac oxygen demand. Thus, vasodilators, β blockers, and calcium block-ers have predictable benefits in angina. A small, late component of sodium current helps to maintain the long plateau and prolong the calcium current of myocardial action potentials. Drugs that block this late sodium current can indirectly reduce calcium influx and consequently reduce cardiac contractile force. The heart favors fatty acids as a substrate for energy production. However, oxidation of fatty acids requires more oxygen per unit of ATP generated than oxidation of carbohydrates. Therefore, drugs that shift myocardial metabolism toward greater use of glucose (fatty acid oxidation inhibitors) have the potential, at least in theory, to reduce the oxy-gen demand without altering hemodynamics.

Increased demand for oxygen in the normal heart is met by aug-menting coronary blood flow. Coronary blood flow is directly related to the perfusion pressure (aortic diastolic pressure) and the duration of diastole. Because coronary flow drops to negligible values during systole, the duration of diastole becomes a limiting factor for myocardial perfusion during tachycardia. Coronary blood flow is inversely proportional to coronary vascular resis-tance. Resistance is determined mainly by intrinsic factors— including metabolic products and autonomic activity—and by various pharmacologic agents. Damage to the endothelium of coronary vessels has been shown to alter their ability to dilate and to increase coronary vascular resistance. 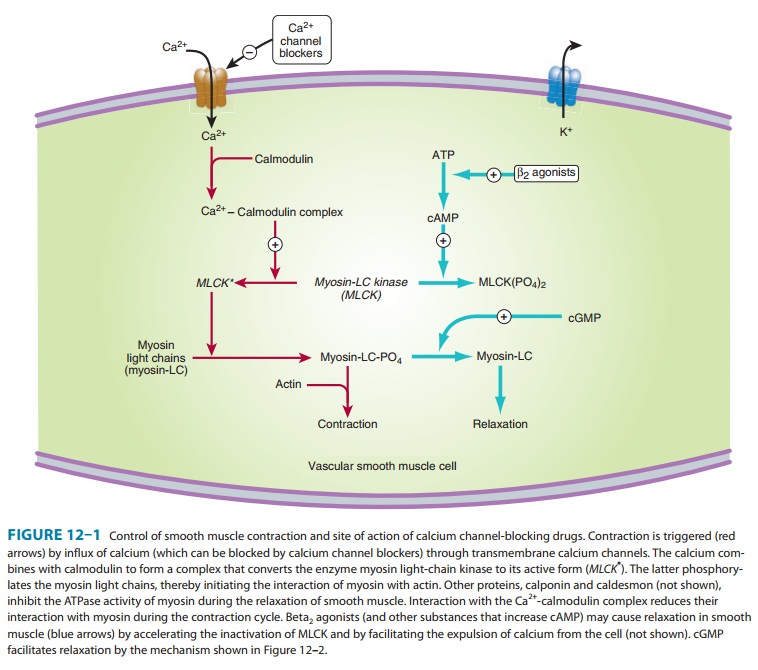 The regulation of smooth muscle contraction and relaxation is shown schematically in Figure 12–1. The mechanisms of action of the major types of vasodilators are listed in Table 11–2. As shown in Figures 12–1 and 12–2, drugs may relax vascular smooth muscle in several ways:

1.        Increasing cGMP: As indicated in Figures 12–1 and 12–2,cGMP facilitates the dephosphorylation of myosin light chains, preventing the interaction of myosin with actin. Nitricoxide is an effective activator of soluble guanylyl cyclase andacts mainly through this mechanism. Important molecular donors of nitric oxide include nitroprusside  and the organic nitrates used in angina. 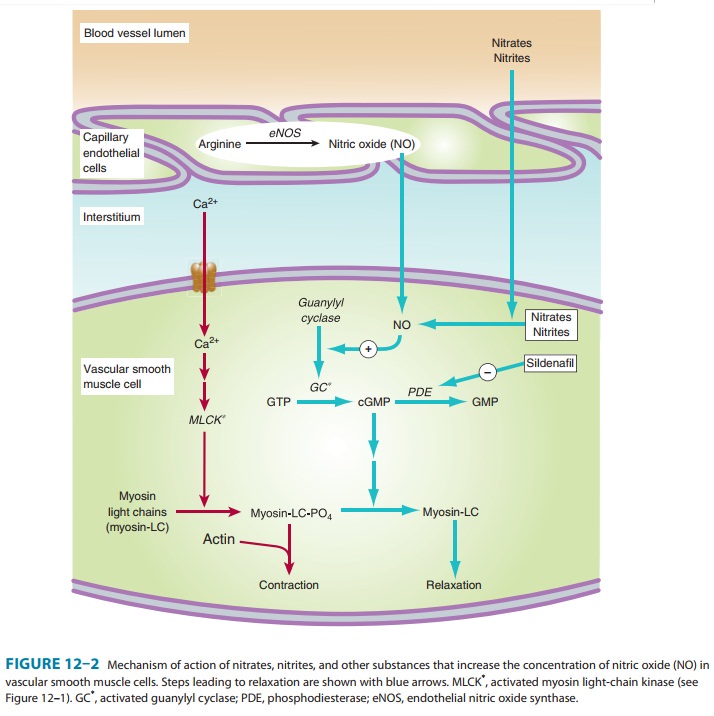 3.        Stabilizing or preventing depolarization of the vascular smooth muscle cell membrane: The membrane potential ofexcitable cells is stabilized near the resting potential by increas-ing potassium permeability. Potassium channel openers, such as minoxidil sulfate  increase the permeability of K+ channels, probably ATP-dependent K+ channels. Certain newer agents under investigation for use in angina (eg, nic-orandil) may act, in part, by this mechanism.

4.        Increasing cAMP in vascular smooth muscle cells: As shownin Figure 12–1, an increase in cAMP increases the rate of inac-tivation of myosin light chain kinase, the enzyme responsible for triggering the interaction of actin with myosin in these cells. This appears to be the mechanism of vasodilation caused by β2 agonists, drugs that are not used in angina (because they cause too much cardiac stimulation), and by fenoldopam, a D1 agonist used in hypertensive emergencies.