Cholera is a toxin-mediated disease. Cholera toxin (CTx) pro-duced by V. cholerae is the key virulence factor of the bacteria.

Cholera is a toxin-mediated disease. Cholera toxin (CTx) pro-duced by V. cholerae is the key virulence factor of the bacteria.

A1 fragment is responsible for the biological activity of the toxin. The A1 subunit stimulates cell-bound cyclic adenosine monophosphate (cAMP), which in turn converts ATP to cAMP in the intestines of epithelial cells of the gut. Cholera toxin has the following biological functions:

·           It also inhibits absorption of sodium and chloride in the intestine.

The cholera toxin can be demonstrated by the following tests:

I.               Rabbit ileal loop test was one of the classical methods developed by De and Chatterjee in 1952. It is a widely used method in which injection of V. cholerae culture or culture filtrate into the ligated ileal loop causes accumulation of fluid, leading to ballooning of the ileal loop.

III.               Chemical estimation of cAMP in tumor cells that have been treated with the toxin.

Toxin coregulated pilus: The pili help in adherence ofV. cholerae to mucosal cells of the intestines.

Accessory colonization: These also help in adhesion of bacte-ria to the intestinal mucosa.

Hemagglutination-protease (mucinase): This enzyme, for-merly known as cholera lectin, is both agglutinin- and zinc-dependent protease. The enzyme splits mucus and fibronectin as well as subunit of the cholera toxin. It induces intestinal inflammation and also helps in releasing free vibrios from the bound mucosa to the intestinal lumen.

Siderophores: It is responsible for sequestration of iron.

V. cholerae usually enters the body orally through contaminatedwater and food (Fig. 35-3). Gastric acidity is the first line of defense against infection caused by V. cholerae, because vibrios are highly susceptible to the acidity of stomach. The conditions that reduce acidity of the stomach to pH above 5 make the host more susceptible to infection by cholera vibrios. 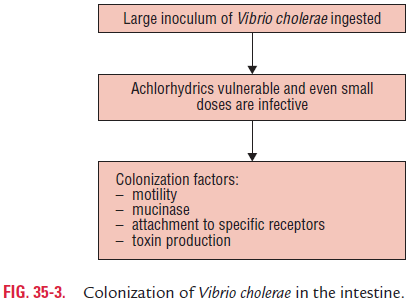 On reaching the small intestine by using its own mecha-nisms, such as motility, chemokines, and production of enzymes (hemagglutinin and protease), V. cholerae reaches the mucous layer of the small intestine. Hemagglutinin and prote-ase break mucin and fibronectin of the mucosa. Subsequently, bacteria adhere to the intestinal wall facilitated by TCP. This synchronous action of CTx, TCP, and a few other virulence factors is regulated by Tox R gene products, which is known as the master switch. 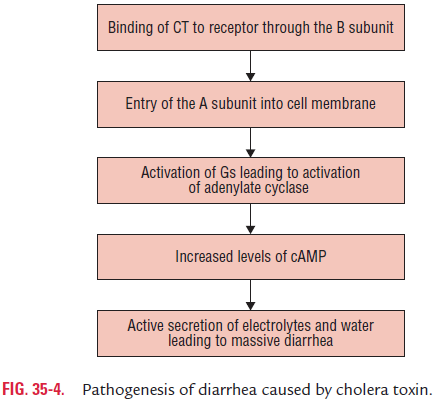 V. cholerae O139 strain shows a similar pathogenic mecha-nism to that of V. cholerae O1 except that it produces a unique O139 LPS and an immunologically related O antigen cap-sule. These two virulence factors enhance virulence of this organism. These are also responsible for increase in its resis-tance to human serum in vitro and development of bacte-remia occasionally seen during the infection caused by the bacteria.