Fresh stool specimen collected before administration of anti-biotics is the specimen of choice.

Fresh stool specimen collected before administration of anti-biotics is the specimen of choice. The stool may be collected by introducing a sterile soft rubber catheter (No: 24–26), or the liquid stool may be collected directly in a screw-capped container. Collection of stool from bed pan is not recom-mended due to the risk of contamination or the presence of disinfectants. Rectal swabs may also be used for collection of specimens. They are particularly useful in collecting stool specimens from convalescent patients who no longer excrete watery stool. Vomitus is not a useful specimen. The collected stool or rectal swab specimen should be sent to laboratory for immediate culture:

·           If delay is anticipated, the specimens may be preserved at 4°C in a refrigerator or in transport media used for V. cholerae.

·           The specimen may be transported in enrichment media, such as alkaline peptone water or Monsur’s taurocho-late transport media and sent to laboratory for processing within few hours.

·           In case of a longer delay in transport, the stool samples may be preserved in Cary–Blair medium or in VR fluid for long duration.

·           In case of nonavailability of transport media, the watery stool can be soaked in a strip of thick blotting paper and sent to the laboratory—packed in a plastic envelope.

Dark-field microscopy is a useful method for demonstrating characteristic motility of the bacilli and its inhibition by antisera. This is a rapid method of examination of stool collected from cases or after enrichment for 6 hours. Direct immunofluores-cence is another rapid method used for demonstration of vibrios in the stool. However, microscopic examination of a Gram-stained stool smear is not recommended for diagnosis of cholera.

The specimen collected in holding media is inoculated first in the enrichment media and incubated for 6–8 hours before being inoculated on selective (TCBS or GTTA) and nonse-lective media (BSA, MacConkey agar, and blood agar). The specimen may also be plated directly into these media before enrichment. The specimens collected in transport media are incubated for 6–8 hours including the transit time before inoculation into the suitable media. The inoculated plates are incubated at 37°C overnight. V. cholerae produces characteristic yellow colonies on TCBS and nonlactose-fermenting colonies on MacConkey agar. 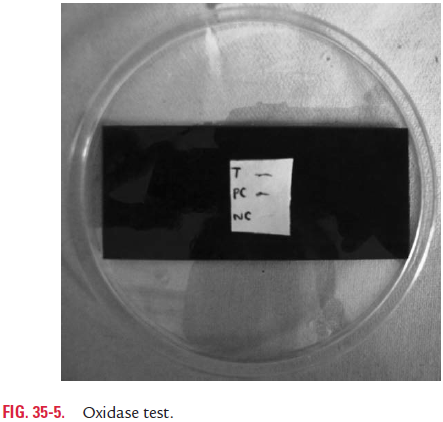 Serotyping: SuspectedV. choleraeare tested by slide agglutina-tion, using specific V. cholerae O1 antisera. In this test, the colo-nies are picked up with a straight wire and mixed with a drop of antisera on the slide. Agglutination of the bacteria shows that the test is positive for V. cholerae O1. If positive, agglutination of bacteria is repeated using specific Inaba and Ogawa sera for serotyping. Hikojima strains agglutinate well with both Inaba and Ogawa sera. If agglutination is negative, the test is repeated with at least five more colonies, as both O1 and non-O1 vibrios may coexist in the same specimen. 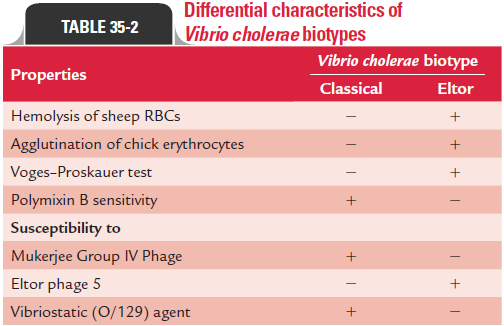 Vibrio colonies that are not agglutinated with V. cholerae O1 anti-sera are usually tested with antisera to the H antigen. Vibrio isolates that are agglutinated by H antisera but not by O1 antisera are iden-tified as non-O1 cholera vibrio. Such noncholera vibrios are tested for O139 by using specific antisera against O139 antigen.

The isolated strains of V. cholerae O1 for phage typing may be sent to the international reference center for Vibrio phage typ-ing at the National Institute of Cholera and Enteric Diseases (NICED) at Kolkata, West Bengal.

Repeated culture of stool is essential for isolation of V. cholerae from carriers because vibrios are known to be excreted intermit-tently in their stool. Collection of stool after using a purgative (such as mannitol or magnesium sulphate) or examination of bile collected by duodenal intubation are frequently useful for diagnosis of carriers.

The complement-dependent vibriocidal antibody assay and antitoxin assay using live or killed vibrio suspensions are use-ful for demonstration of vibrio antibodies in the serum. These tests are useful for seroepidemiological studies, but are of little value in the diagnosis of cases.