V. cholerae like that of Gram-negative bacilli also possesses thelipopolysaccharide (LPS). The LPS has no role in the pathogen-esis of cholera but is responsible for the immunity produced by killed V. cholerae vaccine. V. cholerae possesses two antigens:

·           Somatic O antigen is present in the cell wall of the bacteria. It is a group-specific antigen

·           Flagellar H antigen is a heat-labile antigen present in the flagella and is shared by all strains of V. cholerae.

V. cholerae has been classified according to somatic carbohy-drate O antigen into many serotypes. This serological classi-fication was suggested by Gardner and Venkatraman (1935). More than 200 serotypes have been described, which have been classified broadly into two groups—V. cholerae O1 and non-O1 cholerae:

·           cholerae O1 agglutinate with antisera to the O1 group andare called cholera vibrios or agglutinable vibrios. V. cholerae O1 is subdivided into two biotypes—Eltor and Classical, on the basis of their biochemical parameters. Each biotype has been divided further into three subtypes—Ogawa, Inaba, and Hikojima (Table 35-3). This classification is based on the differences in minor O antigens, such as A, B, C. Serotype Ogawa contains A and B antigens, Inaba contains A and C antigens, and Hikojima contains all three antigens A, B, and C. Hence, Hikojima strains are agglutinated by both Ogawa and Inaba antisera, whereas Ogawa and Inaba strains are agglutinated by their own specific antisera only. 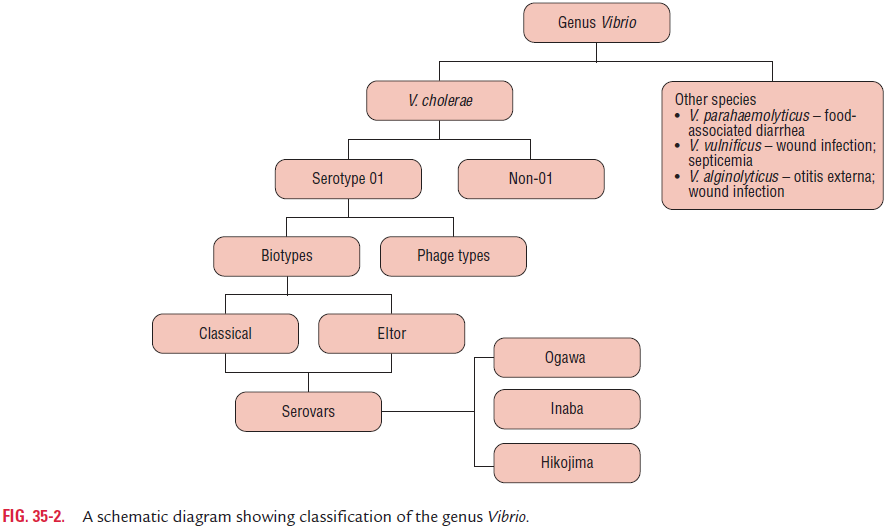 Rest of the serotypes (O2–O138) do not cause any disease in humans.

On the basis of fermentation of mannose, sucrose, and arabi-nose, Vibrios have been classified by Heiberg (1934) into six groups (I, II, III, IV, V, and VI); subsequently, two more groups have been added. V. cholerae belongs to group I.