Streptococci have more than 20 soluble antigens, enzymes, and toxins that contribute in the pathogenesis of various stages of streptococcal diseases.

Streptococci have more than 20 soluble antigens, enzymes, and toxins that contribute in the pathogenesis of various stages of streptococcal diseases.

Streptococci produce a wide range of virulence factors respon-sible for the disease, which include the following (Table 24-2):

These include capsule, teichoic acid, M protein, and F protein that contribute to pathogenesis of diseases in various ways as mentioned in Table 24-2.

Capsule: The cell wall of theStreptococcusis surrounded by acapsule. The capsule is nonantigenic and weakly antiphagocytic. It acts like a barrier between the complement proteins bound to the bacteria and the phagocytic cells, thereby preventing phagocytosis of the bacteria. Capsulated strains that are rich in M proteins are highly pathogenic. 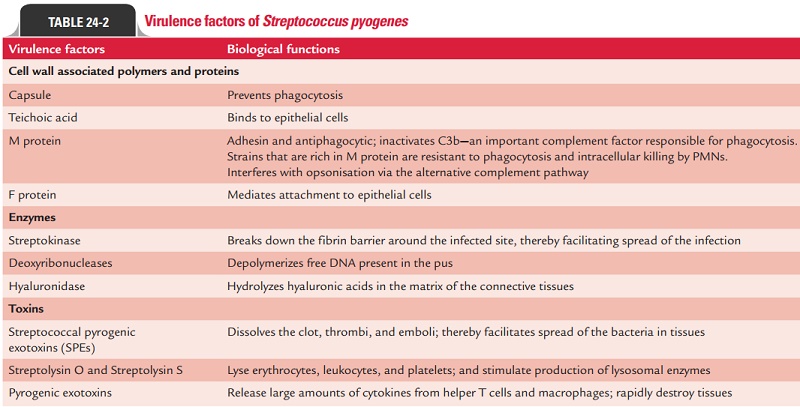 Streptokinase: This enzyme is produced byS. pyogenesas wellas by group C and G streptococci. Two types of streptokinase have been described—streptokinase A and B. Streptokinase activates plasminogen to form plasmin, which breaks down the fibrin barrier around the infected site, thereby facilitating the spread of the infection. This thrombolytic property is made good use of in medical management of myocardial infarction. Antibodies appear against streptokinase (A and B) during the course of infection and are diagnostic.

Other enzymes: These include neuraminidase, amylase,esterase, lipase, and beta-glucuronidase.

·           These toxins are antigenic, and their production is regulated by a temperate phage in their genome.

·           These toxins act as superantigen and are responsible for scarlet fever and streptococcal toxic shock syndrome.

Dick test: The susceptibility of a person to these toxins isdetermined by performing a skin test known as Dick test. In this test, 0.2 mL of the diluted toxin is injected intradermally. In a positive test, a localized erythematous reaction, around 1 cm in diameter, develops within 12–24 hours. A positive test indicates absence of antibodies against the toxin and shows susceptibility to the toxin and thus to scarlet fever. No reaction takes place in a negative test, which indicates the presence of specific antibodies against erythrogenic toxin in the serum.

Streptolysin O: SLO is an oxygen-labile and heat-labile proteinwith a molecular weight of 50,000–75,000 Da. It causes beta-hemolysis only when colonies are grown under the surface of blood agar plate.

·           It is antigenic, and antibodies (ASLO) against it develop in group A streptococcal infection.

The SLO cross-reacts with similar hemolysins produced by streptococci of groups C and G, pneumolysins of S. pneumoniae, tetanolysin of Clostridium tetani, theta toxin of Clostridium per-fringens, cereolysin of Bacillus cereus, and listeriolysin of Listeria monocytogenes.

Streptolysin S: SLS is a serum-soluble (hence named as S) andoxygen-stable protein. It is a small polypeptide of 20,000 Da and is nonantigenic. Hence, no antibodies against this toxin are demonstrated in serum. This toxin:

·           Is responsible for hemolysis around the colonies grown on surface of the blood agar.

Pyrogenic exotoxins: There are two types of exotoxins—exotoxin A and B.

·           Pyrogenic exotoxin A is similar to that of staphylococ-cal toxic shock syndrome toxin (TSST). It has the same mode of action as staphylococcal TSST. It acts by releas-ing large amounts of cytokines from helper T cells and macrophages.

·           Pyrogenic exotoxin B is a protease that rapidly destroys tissuesand is produced in large amount by S. pyogenes.

1.        Adherence: Adherence ofS. pyogenesto surface of hostcells is the first stage in pathogenesis of the disease. The cocci adhere to the epithelium of the pharynx with the help of pili, lipoteichoic acid, F proteins, and M proteins. Initially, adherence is mediated by a weak binding between lipoteichoic acid and fatty acid of the cocci with fibronec-tin of epithelial cells of the host. Subsequently, a strong binding is established by M protein, F protein, and other adhesins of the cocci.

2.        Invasion by the cocci: S. pyogenesinvades into epithelialcells mediated by M protein, F protein, and other antigens of the cocci. Invasion of the cocci is suggested to be respon-sible for the persistence of infection, such as streptococ-cal pharyngitis, as well as for invasion into deep tissues.

3.        Hyaluronic acid capsule, M protein, and C5a peptidase of S. pyogenes are antiphagocytic. These factors prevent opso-nization and phagocytosis of bacteria in many ways.

·           The capsule prevents phagocytosis of the bacteria by acting as a barrier between bacteria and cell.

·           The M protein also binds to the fibrinogen and blocks the activation of complement by alternate pathway, thereby reducing the amount of C3b production.

·           The C5a peptidase inactivates the complement compo-nent C5a, which mediates chemotaxis of neutrophils and phagocytes.

Acquired immunity to streptococcal infection is based on the development of specific antibodies against the antiphagocytic epitopes of M protein. The acquired immunity against a particu-lar M type of streptococci lasts longer in untreated persons than in treated persons. Although such antibodies protect from infection against a homologous M protein type, they confer no immunity against other M serotypes.S. pyogenes is a highly communicable bacterium. It can cause disease in people of all ages who do not have type-specific immunity against the specific serotype.