The enterococci were classified earlier as group D streptococci, because they possess the group D cell wall antigen.

The enterococci were classified earlier as group D streptococci, because they possess the group D cell wall antigen. These entero-cocci, however, showed several distinctive features (Table 24-5) by which they were separated from the streptococci. Thiercelin proposed the term Enterococcus in 1899. The term enterococ-cal group was used by Sherman to describe the streptococci that grew at 10–45°C, with pH 9.6, in broth containing 6.5% sodium chloride and survived heating to 60°C for 30 minutes. Based on acid formation from mannitol, sorbitol, and sorbose 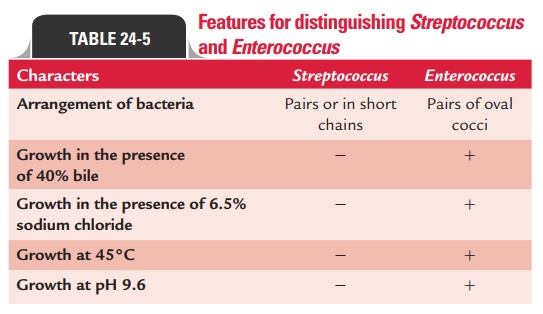 The enterococci are Gram-positive, spherical, oval, or coc-cobacillary and are arranged in pairs and short chains. Most of the species are nonmotile and noncapsulated. They grow at a temperature range of 35–37°C. Colonies on blood agar media are 1–2 mm in diameter and alpha-hemolytic (actually nonhemolytic; appearance of alpha-hemolysis is due to the production of the enzyme peroxidase rather than hemoly-sins). Some cultures are beta-hemolytic on agar containing rabbit, horse, or human blood but not on agar containing sheep blood. Enterococcus durans is beta-hemolytic on agar containing sheep blood as well. On MacConkey agar they produce tiny and magenta-colored colonies. On potassium tellurite agar they produce black colonies. Bile-esculin-azide medium and Columbia colistin-nalidixic acid agar are used as selective media. They are catalase negative and are resistant to optochin and bile. They ferment sucrose, sorbitol, man-nitol, and esculin. They are PYRase test positive, CAMP test negative, resistant to bacitracin, and they do not hydrolyze hippurate.

They possess two important virulence factors: (a) aggregation substances and (b) carbohydrate adhesions. Aggregation substances are hair-like proteins that facilitate binding of bac-teria to the epithelial cells. Carbohydrate adhesins facilitate binding of cocci to host cells gelatinase. Cytolysin and pheromone are the other virulence factors. The cell wall of the bacteria possesses group-specific antigen, which is group D glycerol teichoic acid.

The enterococci are commonly found in gastrointestinal and genital tract of humans and animals. Enterococci are non-pathogenic but now are emerging as important agents of nosocomial infection. They cause urinary tract infection especially in hospitalized patients. Indwelling catheters and urinary tract instrumentation are important predisposing factors. They are frequently isolated from cases of wound infections particularly intra-abdominal. They also cause bacteremia, infection of the bile duct, and endocarditis.

The antimicrobial therapy includes combination of ami-noglycosides with penicillin, ampicillin, or vancomycin. Enterococci are less sensitive to penicillin and gentamicin and are resistant to cephalosporins. Plasmid-mediated resistance is a major cause of resistance among drug-resistant strains of Enterococcus. Vancomycin-resistant Enterococcus (VRE) has beenemerging in the recent years.